PS. Just back from collecting them. As young as it is (2015), I'm tempted to try one tonight.
PPS. Just saw that it has sold out at my local Dan's. Seems that I may not have been the only one that thought it could be good.
Click to expand...

Well I got the SMS saying it was ready for collection so visited my local Dans. The girl there said they were also out of stock and about 10 dozen out the back awaiting collection. 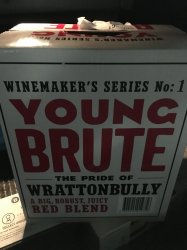 Opened the first last night - no decanting and a post dinner glass with some cheese. Really quite nicely surprised - for a youngster, it was reasonably smooth and now have to put some down. 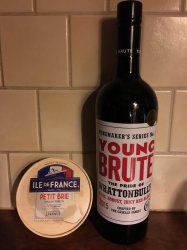 They're unlabelled, if that sort of thing matters to you.

Pretty sure there is no $50 code. I would imagine people are using the one they held onto from the Credit score deal from August. 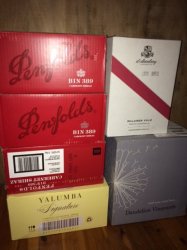 Buddy at my BWS couldn't believe the prices when I picked up this lot from CM's $100 off bonanza.
U

Snoopy113 said:
Pretty sure there is no $50 code. I would imagine people are using the one they held onto from the Credit score deal from August.
Click to expand...

[mod hat]
Some posts soliciting for $50 vouchers have been removed.​
[/mod hat]

For those looking for CM vouchers, may I suggest viewing this thread where they are offered....thus no longer breaching the Terms of Service (soliciting):
Cellarmasters $50 off voucher
V

I cant see the vouchers on the online version of the magazine at http://openroad.realviewdigital.com/dynamic/NRMA Open Road/open-road-map.html

vlado said:
I cant see the vouchers on the online version of the magazine at http://openroad.realviewdigital.com/dynamic/NRMA Open Road/open-road-map.html
Click to expand...

It was an insert in the hard copy of the magazine.
V

Got it, thanks for the clarification
G

Shingleback Red Knot GSM 2016 won the best Red at the Adelaide wine show the other week. Not bad for a $15 wine. Sold out at Dan's but a few left direct from the vineyard. Anyone tried it?
www.shingleback.com.au/products/red-knot/red-knot-mclaren-vale-gsm

Dr Ralph said:
Don't count on it. I couldn't resist at around $16 a bottle and ordered 10 cases of it (separately with a $50 discount voucher for each order) in the last 12 hours and it's been sitting in my orders saying 'Received'.

It wouldn't be the fist time that Cellarmasters have cancelled peoples orders.
Click to expand...

How long will you plan to lay this haul down for Dr Ralph?
You must be blessed with a large cellar - I'm jealous

The Warlock said:
How long will you plan to lay this haul down for Dr Ralph?
You must be blessed with a large cellar - I'm jealous
Click to expand...

This is a wine that I buy at least a case or two of each year. Ten cases was a large purchase for me. I couldn't resist given the very low price. It's been at least five years since I've seen it for a price like now.

I'm currently drinking my 2004's. As usual for this wine, they haven't disappointed.

BTW, my online tracking was still showing 'hand picked' for a number of cases. So I called cellarmasters and they said that the item was on back order but all cases I have ordered would be supplied. Some have already shipped.

I'd already mentioned the price I obtained it for to a number of friends and they asked me to get them some. So another 5 cases have been ordered today. Happy to order for them and take the credit card points

I salute your $50 voucher reserves!

I've promised myself no more dozens as my cellar can't cope.. this is definitely a great bargain though.
P

CM site still having problems accepting Wish Cards..
and advise its having difficulties in sourcing the problem....lol

pilatus said:
CM site still having problems accepting Wish Cards..
and advise its having difficulties in sourcing the problem....lol
Click to expand...

Yes. Gift cards not accepted for at least the last 4 days.

B Man said:
View attachment 107489
Buddy at my BWS couldn't believe the prices when I picked up this lot from CM's $100 off bonanza.
Click to expand...

Saw someone leaving my local BWS today with at least 6 cases that they had picked up. Probably just as happy as you were

pilatus said:
CM site still having problems accepting Wish Cards..
and advise its having difficulties in sourcing the problem....lol
Click to expand...

I should probably start a blog as has been suggested to me, but in the meantime I’ll continue here where it seems a few things have changed since I last posted, not least of all the new website software (good how mailbox size now unlimited, bad how no more archive/print thread text view) and wine forum (bad how more difficult now to view new threads if only watching old ones)…

I stopped buying wine at the end of July but unfortunately that only lasted a month, when I couldn’t resist Pierro Chardonnay 2015 for effectively ~$34 during Woolworths/BWS 25% off any six sale after an extra $25 off, 5000 rewards points, $20 Cashrewards, 5% off WISH gift card

If you’d like some Pierro but don’t have a BWS with stock, then Smashvino has it for $55.20 using SMASHSOCIETY for 20% off ($9 delivery)

As alluded to previously, chardonnay has been a focus of mine lately, such that I've been tempted to start thread similar to the pinot noir one, but am worried that we might end up with threads for every varietal

I haven’t tried Seppelt Jaluka, but during the recent Wine Selectors 20% off sale, bought In Dreams Chardonnay 2015 ($15.64, JH96) to go alongside Jim Barry Riesling 2016 and Punt Road Pinot Noir 2015 as house wines (I also finally secured the much-lauded Dandelion Vineyards Wonderland of the Eden Valley Riesling 2012 for $17) - myCellars has the 2013 for $16.95 (pm me for free delivery code)

A. Rodda Willow Lake Chardonnay 2016 (JH96, Best White at Yarra Valley Wine Show) impressed me at Boccaccio last Sunday, but is $30 elsewhere using a 25% off code (pm me for details, also Pooley Cooinda Vale Chardonnay 2014 is $37.50)

Three wineries stand out for me from the Halliday Wine Companion Awards/Book 2018: Bekkers, Dappled, Mount Mary.

The neighbouring 93pt Burton McMahon D’Aloisio Chardonnay 2016 is $27.50 at Bottle Shock unless someone has a coupon code?

Before leaving with some deals at Nick’s and Dan’s which you might have missed, as well as others at Cellardoor.co and McWilliam’s that shouldn’t be, does anyone know why several wines have suddenly become out of stock at My Wine Guy? I’m not a member of Red Bigot, but is there a code circulating?

Nick’s:
Dan Murphy’s:
Cellardoor.co:
If you’re not a member, then pm me for a sign-up link with $25 welcome credit (note that this is not a referral from me and I receive no benefit)