The Great Race to Ogden

GREAT photo showing the mammoth machine with tiny humans alongside. I've only met SP's cab forward #4294 in Sacramento but 4014 is another size up again.

As a break (from the break) for 3 days, then headed south via Helper on the old Denver & Rio Grande Western to Moab and a visit to Arches and Canyonlands. While I've travelled to these areas and National Parks more than once, it's the sort of place I could go every holiday.

The road not taken (ran out of time)

The next part of the journey for 4014 and 844 was the return to Cheyenne. The roads out of Ogden and Salt Lake started to choke up early and there was limited parking along Weber and Echo Canyons. I80 was down to 15mph in places while people jostled to watch the train. I thought the RV motor homes following the train were annoying but there where three coaches, two of Korean and one of Japanese railfans. Watching them navigate the back roads and dirt tracks amused many.

The highlight of the entire trip for me was standing in Echo Canyon, for those on the BAM the other day there is print on the wall of a 4000 in Echo Canyon at the same location back in the 40's I stood at in May 2019.

844 is the smaller express passenger locomotive (about twice in weight and tractive effort of a NSW 38 class or Victoria R class)
https://flic.kr/p/2gcpy8z


And the business car St Louis on the rear, note the "drum head" showing the Golden Spike 150 Anniversary, UP is a company more than 150 years old with a market capitalization of USD125B. Yes I need to upgrade the BAM!
https://flic.kr/p/2gcpRGw

Motive power overkill? 4014+844+diseasel for about 9 cars? I see you picked your spots rather than chasing. Very wise given the traffic.

coriander said:
Motive power overkill? 4014+844+diseasel for about 9 cars? I see you picked your spots rather than chasing. Very wise given the traffic.
Click to expand...

The diesel was in dynamic brake mode the whole way to give 4014 some load while various parts were worn in.
Last edited: Oct 2, 2019

Why is one belching black smoke, while the other has white smoke?

JohnM said:
Why is one belching black smoke, while the other has white smoke?
Click to expand...

They are both oil burners, when you have the oil tap open you're getting black and when you back off to just keeping the burners on and your steam pressure up you have clear and there is a mixture of steam making it look white. A fireman it trying to vaporize the oil, there is a pipe under the cab from the tender to a valve in front of the fireman, then to an atomizer in the firebox which creates a spray. Like igniting an aerosol can.

Here is a shot I took of 844 back in 1991 at Rock Springs WY, to clean the boiler flues you open it up and throw a shovel of sand in the fire where the oil is being atomized. An interesting point of consumption, these big locomotives are using 200 to 300 gallons of water per mile.

What a fantastic experience and great pics.very jealous.

Getting up close and personal.
https://flic.kr/p/2hkyf48 Through the cross over at Green River pulling up at the crew room.

Under a cloud at the depot and bright sunshine on the pale hills.

End of the Big Boy adventure, headed south from Wyoming and back to Las Vegas, decided to visit the north rim of the Grand Canyon as it must be opening soon, the north rim is seasonal.

On arriving at the park entrance it was still closed for another day. Not to let this slow us up, we drew a mud map with retail assistant behind the counter in the local souvenir shop and found there was a series of dirt roads which we could take to the canyon rim. Was the Datsun up to the challenge, lets give it go.

You certainly demonstrate the scale of the Big Boy - massive cylinders!

(N.B. The Boxpok wheels were developed/patented in Granite City, Illinois.) 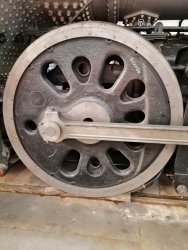 After visiting the Grand Canyon via many dirt backgrounds it was into Las Vegas. Vegas he been reported here many times so I won't go through the details of that.

I did visit some of the railroad equipment used by the Jackass and Western Railroad. The Jackass and Western was the real deal and a common carrier which operated moving nuclear bombs and rocket engines in Nevada at the "test site". They were certified for passenger haulage as well which I thought was amusing.

A museum I highly recommend which isn't on everyone's list of things to do is Vegas is the Atomic Testing Museum, it's only one or two blocks off the strip and has many interesting stories to tell. They go through all the testing with stores of evacuation of Las Vegas in the 1950's when the wind started to turn after a surface test. The testing was so close to Vegas some of the Casinos advertised roof top viewing and there were post cards of The Strip with mushroom clouds in the background.

One thing I never know was the US had or still has a tank which could fire a nuclear bomb and there is some film of it in action, the Yanks would have build a nuclear hand grenade if they could of worked out how to throw it far enough.

I bought a book on photography while I was there, lets just say you photograph these things carefully. 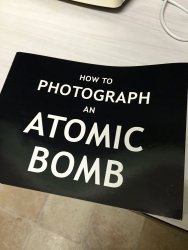 After a two nights in Vegas a drive via Hoover Dam and onto Kingman where the Santa Fe Railroad once ruled and onto old Route 66 via Oatman and back to LA.

One into greater LA stayed up in the Simi Valley for a visit to the Ronald Reagan Presidential Library.

If only he new what was to come

After the Ronnie museum is was time for high brow and a drive to Pasadena and the Norton Simon Gallery. Norton Simon made his billions from processed food and drink such Canada Dry among many.

He built up a sizable and notable collection of art and owned things I had only ever seen in books, van Gogh, Gauguin, Cezanne, Monet, Degas, Picasso the list goes on. A truly great private collection. The is also a garden full of Henry Moore and Rodin sculptures.