The Great Race to Ogden

The trip report dates to travel in May 2019, but starts back in 2014. I'm going to be slow and steady writing it so I can match up the photos with the story, bare with me, And a warning, there will be lots of trains.

In 2014 the Union Pacific Railroad (UP) in Omaha Nebraska decided it would celebrate the 150 years of the ramming of the golden spike as the last spike to connect the transcontinental railroad (you've all seen the photo, two locomotives nose to nose with attendees gathered and one worker pouring bubbly from one train to the other). To do this UP repatriated a locomotive it had donated to a museum in Pomona California in 1962 and rebuilt it. The locomotive is the 4000 class "Big Boy" no 4014 known as the largest steam locomotive ever built at 570 tonnes. Union Pacific 4014 - Wikipedia

So in 2014 the UP announced it would rebuild 4014 and even then stated they would haul a train from Cheyenne Wyoming to Ogden Utah and be there May 9th 2019. I made a decision I need to be there as well.

My own trip started a 4am on April 30, so I could get to Cheyenne in time to see it depart on the Great Race to Ogden.

Me waiting for my 4am pick up at home, then QF Sydney Brisbane in Y and then PE to LAX on a Dreamliner. 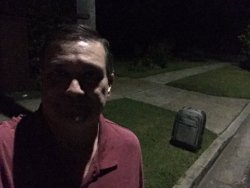 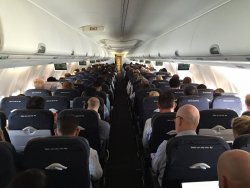 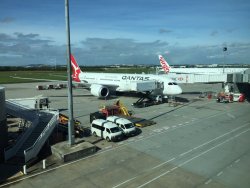 Arrival into LAX was on time meaning the transfer through customs was slow. My passport worked through the kiosk and gate scanner but my travel mates did not. So went to retrieve the bags and waited in the baggage claim hall for over an hour. There were a lot of people that morning.

Then was off to collect the rental, I used Enterprise this time and booked direct with them. I requested a Dodge Challenger, but on arrival they were all out and was offered a Mustang convertible, the luggage didn't fit in the trunk so they offered a Camaro but that was worse. So had to settle with a Nissan Maxima, which I told Enterprise I hadn't come to America to drive a Datsun. I don't think he understood what I was saying.

The Datsun it was. Off to Mojave, Tehachapi we went that day on our drive from LAX to Cheyenne. Spending the first night in Mojave to rest up, get into the time zone and get some real hash browns from a real diner, not the stuff we get here!

Monolith Ca, yours truly and the Datsun. 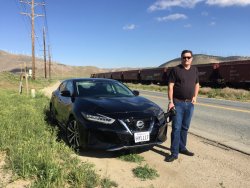 Back in 1988, we travelled to the west coast for our honeymoon (courtesy 2 business class QF tickets given to my wife who then was an executive with TAA). Mrs C said I could have one day for trains, pick any location. What else but Tehachapi? (I actually cheated a bit 'cos we also rode the Roaring Camp and Big Trees Narrow Gauge). We packed a picnic lunch, snaffled a blanket from our motel and sat on that hill in beautiful 28oC sunny weather watching that incredible parade of trains grind their way up the pass and through the loop. Your photo brings back such wonderful memories, I'm tearing up.

After enjoying the afternoon southern California sun on the edge of Mojave, the next day saw a drive around Mojave airport where Virgin Galactic have a hanger. Looked the maps, I always take paper maps as it give me an overview of mountains, rivers and deserts and much more straight forward to choose routes which are interesting rather than point to point.

Drove north via Big Pine and then east Tonopah via Rachel and Area 51, Crystal Springs to Ceder City Utah arriving there about 10pm. A long day in the car but the high mountain desert scenery is amazing. 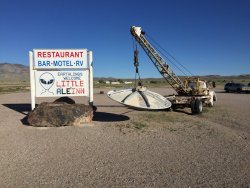 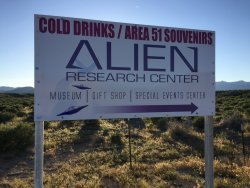 Up early and away from Ceder City on I15 then I70 to Denver via Glenwood Canyon. Being America you can enjoy the marvels of the Rocky Mountains without leaving the comfort of your car. This was a straight drive through day, while a beautiful clear day for most of it the weather had turned and blizzard conditions form Vail through to Loveland.

Traffic was down to a crawl through Georgetown and road workers were repairing the tacmac from an earlier tractor trailer (to use the American term) catching fire at the exit ramp.

Getting to Denver allowed a whole day the next day for a visit to the railroad museum in Boulder (Denver) and head up to Cheyenne along I25. 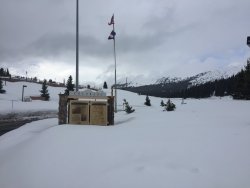 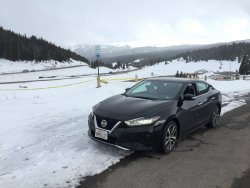 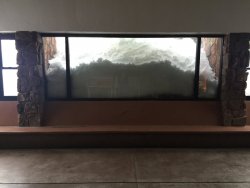 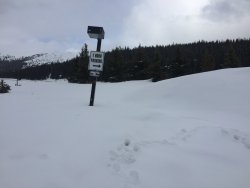 A pro tip:
If you are a member of any Australian motoring club, eg RACV RACQ NMRA, you can walk into any AAA store, show them your card and they will give you really good paper maps for anywhere you're travelling. I have a small suitcase of AAA maps I've collected over the past 30 years. (I usually stock up in SFO's AAA on Sutter.)
The other good thing about AAA maps is that they generally include railway lines - many of the free rental car maps don't.

Arrived in Cheyenne and wandered down to Main Street and deport for a look around. (not my first time in Cheyenne).

The depot (passenger station to us) is now a museum and brewery, how good is that.

Paid a visit to the museum first to get that our of the way, it even has an upstairs lounge for viewing the rail yard and looks directly across to the steam shed where 4014 was being prepared although it was out of sight. 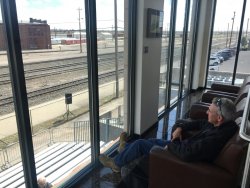 Then it was time for a visit to the other end of the depot building to sample the products. The brewhouse allowed you to pour your own drink, there was a row of taps protruding from the wall and you helped yourself. 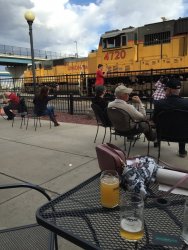 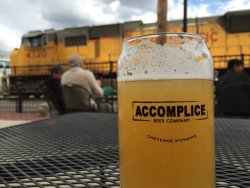 Note the people on the bridge waiting for a sighting of the Big Boy should it emerge from the workshop. 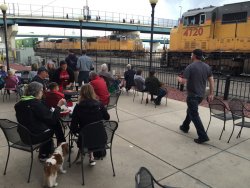 After a great afternoon beer tasting we too walked onto the bridge. 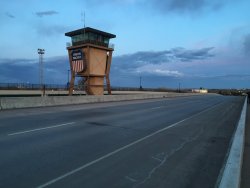 UP's other operating steam locomotive 844 moved off to the turn table ready for the next morning. The Accomplice Brewery and depot is the largish brick building on the right. UP has a shed full of heritage locomotives both steam and diesel electric. 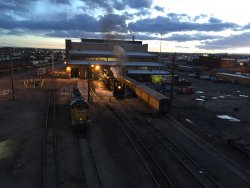 Some people waited late into the night in the hopes 4014 would come out, but it didn't while we were there. 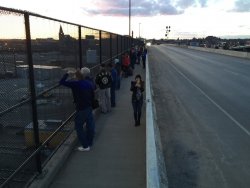 BAM1748 said:
Something to note, all north south roads are odd numbers and east west are even.
Click to expand...

This is a brilliant system but only applies to the Interstate Highway System.
North-South interstates: number ends in 5, counts up from west to east
East-West Interstates: number ends in 0, counts up from south to north.
Exit numbers are based on nearest mile marker, mile markers start at state border.
Feeder highways have three digits with original interstate in number (eg I-580 connects I-5 to I-80)
Alternate highways also use three digits eg I-405 in LA as parallel to I-5.
State highways and roads: importance is conveyed by number: 101-200 major intrastate highway, 300s, regional roads, 500s local roads, etc.
Route shield for state roads / highways are usually map outline of state (though CA uses upturned shovel as a nod to their goldrush era)
Simple, logical, well thought out. I'd worked out 95% of the highway system the first time I drove in the US in '78.
All highway numbers in a distinctive large shield at the same position (ie the top) of every sign (I don't know about other states but here in Vic the route number is a dull yellow letter and number and is always the same size as the rest of the text on the sign - had to be a non-driving public servant with a great love of the mother country that designed this schemozzle).
/rant off

Will continue next week, I have to meet the BAM at Port Botany tonight 1am on its journey to central for Saturday morning.

Have a great trip. I wish I could have joined you.

A really different perspective on this part of the US

The next morning The Great Race to Ogden started in Cheyenne, the great state of Wyoming got in on the show and all the overhead freeway signage on I80 reflected the event for the 5 days travel to Ogden Utah. 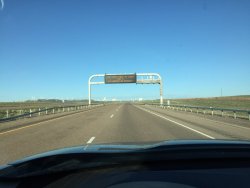 The first stop was on the western end of Cheyenne where the old Colorado and Southern Railroad crosses the UP on an overbridge, the crowds had gathered which was a sign of the crowds to come and the traffic jams on I80.

Traffic jams started appearing in literally the middle of no where.
https://flic.kr/p/2gcnFCi

The next days were spend racing across the high plains of Wyoming, Laramie, Rawlins, Rock Springs, Green River through Echo Canyon and into Salt Lake CIty and Ogden.

The overnight stop in Rock Springs let everyone get close.

The run into Ogden was a rainy day, traffic jams on I80, state Troopers trying to keep the traffic moving but in the end they gave up and enjoyed the show themselves. I should say clicking through to the Flickr photos will give larger his res versions.

The train laid over for 3 days after this.

Great photos Matt. I was standing next to 3801 in the workshop at Chullora yesterday and thought it was biggish, but nothing like Big Boy!

OATEK said:
Great photos Matt. I was standing next to 3801 in the workshop at Chullora yesterday and thought it was biggish, but nothing like Big Boy!
Click to expand...