The COVID-19 vaccine rollout in Australia has begun

There are no vaccination clinics with a current capacity of 30,000 per day.

The mass vaccination hub has so far administered 7081 Pfizer shots. It will have the capacity to give 30,000 shots each week when its AstraZeneca pharmac_ opens to people aged 50 and over on May 24.​ 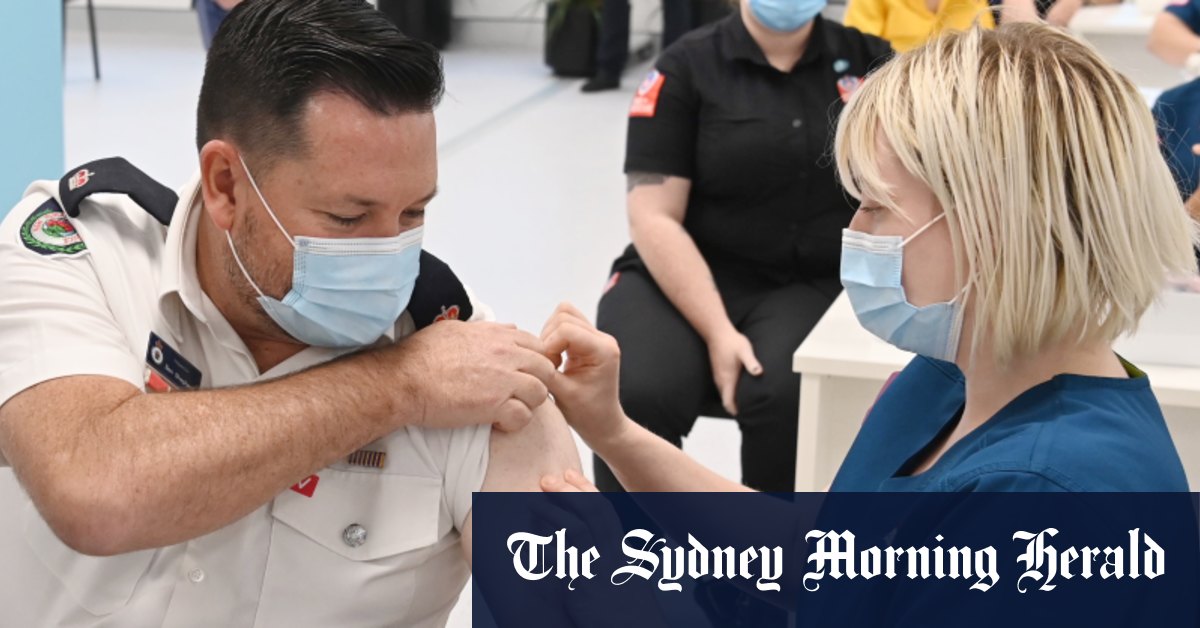 NSW Health has recorded its highest number of COVID-19 vaccinations in one day, with 7552 vaccines administered across the state yesterday.

“The mass vaccination centre will be able to administer up to 30,000 vaccines per week once it is up and running, that means around 5,000 vaccinations per day,” Ms Berejiklian said.​
​
“The Centre, combined with the more than 100 NSW Health run clinics and hubs, means NSW Health can administer around 60,000 vaccines each week across the State.”​ 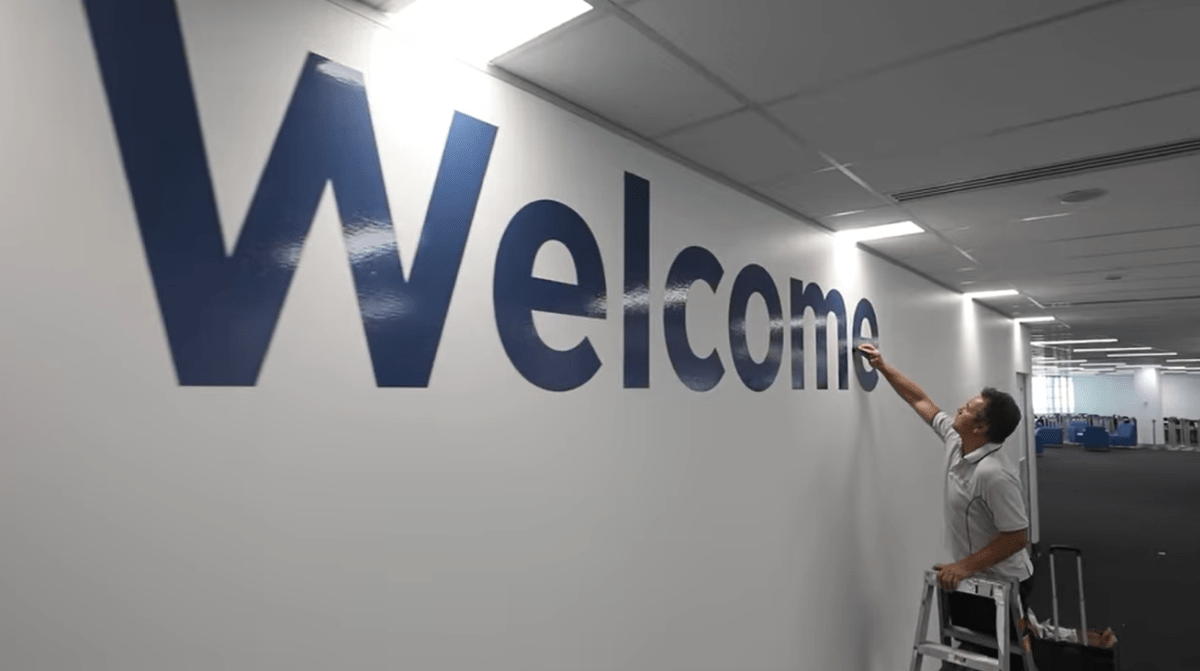 The mass vaccination centre at Sydney Olympic Park has opened today with thousands of people booked in to receive the COVID-19 vaccine this week. During its first weeks of operation, the Centre wil…
thepulse.org.au


Vic continues to open more mass vaccination hubs. The new Showgrounds Hub is about to open.

A vaccine hub opening at the Melbourne Showgrounds on Monday, May 17, to be managed by Western Health, is among a number of additional vaccination centres to be opened up across the state.​


Supplying the GP's who have already delivered more that half the doses is the easiest way to ramp up now as most GP clinics that are doing it can easily do several multiples of what they are already doing, and other GP's have yet to start as 50 per doses/ week. was not viable for them.

​
Last week the federal government announced thousands of general practices would receive three times as many COVID-19 vaccine doses from this week, as it continues to ramp up its vaccination program.​
​
​
The more channels the better though.
Last edited: May 14, 2021

We know that both Moderna and Pfizer are developing boosters for their Covid-19 vaccines and that the novovax may not need one, but you dont hear anything about AZ boosters which has mislead some people into thinking its not needed.

Whereas the reality is the AZ and J&J are not a great candidates for long term use due to “vector immunity”. You can’t be repeatedly immunized with these types of vaccine because you’ll likely develop immunity to the adenovirus vector (the delivery vehicle) itself. When that happens your immune system interferes with the delivery vehicle getting into your cells and the effectiveness of these vaccines would erode over time.

Those who get AZ now, will need a booster from another vaccine type either a mrna or novovax next year. This was one of the main drivers for the new moderna order.

lovetravellingoz said:
Yes, and GPs have had very limited supply. At least that starts to ramp up from the 17th May.
Click to expand...

"Limited" seems a strange adjective to use when GP's have been responsible for 55% of the injections.

That figure would more seem to indicate some wile GP's may have had limited supply, other Gp's may not have. As to why that may be , let me go find my tin hat.

serfty said:
"Limited" seems a strange adjective to use when GP's have been responsible for 55% of the injections.

That figure would more seem to indicate that while some GP's may have had limited supply, other GP's appear not to have. As to why that could be, let me go find my tin hat.
Click to expand...

A majority of clinics that are active (who tendered) are still on 50 a week. Once this is resolved there will be a surge of jabs. And yes it’s a terrible indictment on our total number isn’t it!

serfty said:
"Limited" seems a strange adjective to use when GP's have been responsible for 55% of the injections.

That figure would more seem to indicate some wile GP's may have had limited supply, other Gp's may not have. As to why that may be , let me go find my tin hat.
Click to expand...

Limited per GP practice as in less than they could have used if provided..

However don't take it as a negative criticism as overall supply was limited as well.

Overall supply is now accelerating and so GPs and the other distribution channels can all receive more.

However it does seem that some people prefer to get vaccinated by their own doctor and so greater supply to the GP's should help to kick up the vaccination rate. 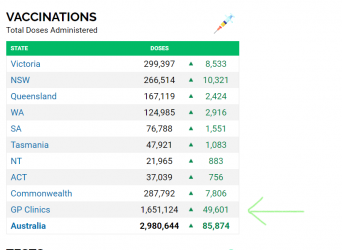 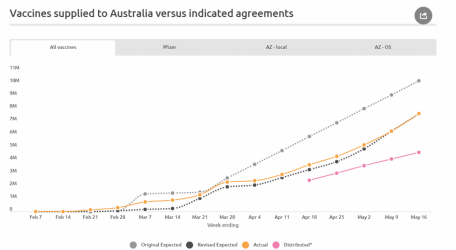 Not sure why the knocking of AZ re boosters. It is not the case that if you get AZ now that you are left high and dry.

From what has currently been indicated it does not matter if you get AZ, Pfizer or Moderna this year all who get vaccinated this year are most likely going a booster next year if CV19 continues to develop new and increasingly different strains.

One booster deal with Moderna, has already been signed. Other booster deals for Moderna or other vaccines may well be too. Indeed if boosters are required they will need to be signed as the Moderna deal is not yet enough to provide a booster for the whole population.

If CV19 becomes endemic then you might need an annual CV19 vaccination just like you do with the Flu vaccinations.

You can have AZ or Pfizer this year, and then the Moderna Booster next year.

They all work on the spike protein.


Scientists say this kind of mixing-and-matching is possible because most of the COVID-19 vaccines approved for use so far all elicit an immune response to the same part of the coronavirus: the spike protein.​

There are still a lot of CV19 Vaccines under development and so what we will get in future may well substantially change.

Next week should ramp up more, and after the 24th May even more.

At some stage it will slow down while we wait for the balance of the Pfiser doses to be delivered, and for the Moderna doses to arrive from September on.

Once they are up and running properly we will see a huge jump in vaccinations because they will consult their patients properly and negate some of the rubbish in the media about AZ.

It also looks like they will get Pfizer as well which is great news.
Click to expand...

I forget to say that they were also asked about Pfizer and said that they had no stock at all.

The graphic from Covid Live is misleading as it labels the Commonwealth Primary Case doses as GP Clinics (implying that given by a persons own GP). When in fact a significant portion of the doses were administered by Respiratory Clinics (and aboriginal health clinics) who have had hundreds of doses available to administer each week. The GPRCs are not the persons primary care physician (and lost of people dont have a GP).

They do not have to be your GP.

The GP respiratory clinic I was vaccinated at was not run by my GP.

I had to sign up to this new GP clinic as a patient of that practice to get vaccinated.

My GP had no stock. So the GP RC was quicker.

The GP RCs get a lot more doses than the 50 odd that GPs who are not RCs had been getting.


This is in essence the same as my normal travel vaccinations where I go to GP, different from my normal GP, who specialises in such vaccinations.
Last edited: May 14, 2021

Lynda2475 said:
Nice. Curious are you in one of the occupations they asked about in the registration from i.e. a teacher?

Did invite come via email or phone?
Click to expand...

No, no special occupation.
Came via email.
I did register my interest very early though, probably before midday Monday.

434,000 done in the last week. That’s a significant increase on what we were doing a few weeks ago.
M

Flying mermaid said:
434,000 done in the last week. That’s a significant increase on what we were doing a few weeks ago.
Click to expand...

Good progress, but still a lot more to go. With CSL making a million(?) doses a week that should be able to push up to a significantly higher figure.

mviy said:
Good progress, but still a lot more to go. With CSL making a million(?) doses a week that should be able to push up to a significantly higher figure.
Click to expand...

With more doses becoming available it is probably why from Monday that they start increasing supply to to GP's, and even more the week after.

mviy said:
Good progress, but still a lot more to go. With CSL making a million(?) doses a week that should be able to push up to a significantly higher figure.
Click to expand...

Just on the GP increase.

Commodore Eric Young on 10 May stated:


This week, we are further increasing the allocations of vaccines to states and territories and our general practices, with 130,000 additional doses of Pfizer vaccine going to the states and territories, nearly doubling their allocations, and an additional 270,000 doses of AstraZeneca vaccine going to primary care.​
​
That will allow us to triple the allocations of doses from 50 to 150 doses, for our nearly 3000 low-volume general practices, and double the allocations from 100 to 200 doses for our 1000 medium-volume practices.​
So weekly that is potentially:
1000 by 100 extra = 100,000
3000 by 100 extra = 100,000

The higher volume GP's (probably the Respiratory Clinics which are run by GP's) probably get the other 70,000.

Not stated, but probably also occurring is extra AZ to the state's and territory's hubs as well. ie Olympic Park said they were starting with just Pfiser, but would also soon start with AZ at which time they would move to 30,000 total vaccinations per week.

Commodore Eric Young on 10 May stated:

The higher volume GP's (probably the Respiratory Clinics which are run by GP's) probably get the other 70,000.

Not stated but probably also occurring is extra AZ to the states and territories hubs as well. ie Olympic Park said they were starting with just Pfiser, but would also soon start with AZ at which time they would move to 30,000 total vaccinations per week.

150 is still far too low for many GP clinics still on the 50 ration right now.

There are clearly STILL bigger supply chain issues holding them up.
M