I flew to Europe recently and put in a minimum bid for an upgrade to PE. The extra comfort was good but I am glad I only paid a small amount to experience it. I would not pay the asking price for PE but I would bid for an upgrade again. I found the food good - I used Book the Cook for all meals.

A friend just returned from a week's break to Asia flying SQ via SIN. Offered the bid to upgrade to PEY both ways and they submited bids for $220 (there were one to two clicks above the minimum allowed of $200 each way).

The MEL-SIN flight was fairly empty in economy - bid to upgrade was unsuccessful. But they were very happy upper deck in one of the pairs of seats by the window.

The return SIN-MEL was packed in economy, the upgrade was successful. PEY was empty.

So it seems there might be some link here... if economy is full, rather than op-up they will accept low bids. Dunno if a higher bid will be successful for flights that are empty in economy. I guess they might be.

For meals, the menus are the same physical size, the differences being a choice of three mains in PEY rather than two in economy, and the addition of champagne in the drinks list. The second meal service (refreshment) was identical for PEY and Y.

Of course you can also book the cook in PEY.

No idea why other than check-in advising I was on standby which should not be the case as I had confirmed booking back in May but I was seq #452. My VA Gold number was only added to booking at check-in.

When I sat in 35D the guy in front was practicing his recline and I thought "oh no, not again" but I was wrong. The IFE screen is quite big and comes away from the back of the seat so much it does not matter if seat in front is fully reclined the IFE screen is level if you are sitting up.

Food is ok with 3 choices including turkey and cranberry choice today being Christmas Day. 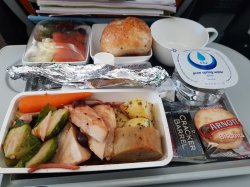 Just returned from a SQ PE experience - overall - great on the A380 day time flight from SYD - excellent service with senior cabin crew who seem to only look after PE. Food was surprisingly good. Even had a convenient toilet. Nicolas Feuillatte generously served and even addressed by name.

Well that was a false sense of expectation on the way back - 777 - some of the worst service I can remember on SQ. Crappy food and wine, the smallest serve of some non-descript champagne (...about 50ml here and the plastic cup then whisked away never to be seen again), staff who didn't respond to call buttons and then wanted you to turn if off as soon as they arrived at the seat (even before I asked a question!) - and my request to speak to the service manager never eventuated. So SQ - unlikely to try that again.
Earn Cash from everyday purchases
Get paid up to 25% in real cash from your everyday purchases from leading companies such as Virgin Australia, Booking.com, Woolworths, Coles, Apple, Microsoft and much more. Free to join and no catches!
Recommended by the Australian Frequent Flyer
You must log in or register to reply here.
Share:
Facebook Twitter Reddit Pinterest Tumblr WhatsApp Email Link