The 0005 hours, just after midnight SQ218 from MEL to SIN is generally reliable and punctual. I have used this a few times and it has been thus.

However on Wednesday 31 July, A380 9V-SKN did not become airborne until 0738 hours. Arrival should be at 1315, 435 minutes tardy. This was due to the inbound SQ217 not taking of from SIN yesterday until 2059 compared with its 1100 timetabled late morning departure, so MEL arrival on 3 July was 0340 instead of 2025 on 30 July. An A388 must have failed, as this aircraft came in to SIN half an hour early yesterday at 1650 hours on SQ637 from NRT and was then purloined to operate the MEL-bound flight.

I assume that delaying the departure until 0717 hours was because SQ had advance notice of this delay and hence passengers may have been put up in hotels if they were not local Melbourne residents.
Last edited: Jul 31, 2019
M

SQ208, the 1825 hours early evening MEL - SIN on Monday 26 August (A3589 9V-SMQ) took off at 1947 so expected arrival on Tuesday 27 is 0116 hours, 61 late. This aircraft pretty much has minimum turnaround allowance of just 75 minutes in MEL but it arrived as SQ207 only seven minutes tardy at 1717 so not sure why the outbound was delayed so much. Relatively unusual for SQ, just as Silvia's previous post was not an everyday occurrence.
M

With heavy rain in and around Sydney during the evening of Thursday 29 August, there is a large number of delays. SQ288, the 1030 hours midmorning SIN -YD that took off at 1059 (only 5-10 minutes late) is arriving at 2111 hours, 61 late with B773ER 9V-SWQ. Like a few others, the aircraft had to hold above Cowra, then Crookwell and finally north of Goulburn.
S

I’m in the silver Kris Lounge in Adelaide waiting for it to come from Melbourne with a three hour delay, are there any other Lounges we would be able to get into with a reward business class ticket?
M

The aircraft then took off from MEL at 1058 hours with ADL arrival expected at 1140 hours, meaning a probable 1300 or so departure for SIN. This would be 230 minutes late and probably means some missed connections in SIN.
C

Melburnian1 said:
The aircraft then took off from MEL at 1058 hours with ADL arrival expected at 1140 hours, meaning a probable 1300 or so departure for SIN. This would be 230 minutes late and probably means some missed connections in SIN.
Click to expand...

I’m feeling pretty happy I decided on a 20+ hour stopover in SIN, and stay at the Crown. What is the process if you don’t make a connection due to weather? With a award business fare??
M

Clive005 said:
I’m feeling pretty happy I decided on a 20+ hour stopover in SIN, and stay at the Crown. What is the process if you don’t make a connection due to weather? With a award business fare??
Click to expand...

You'd just proceed to the transfer desk and be rebooked. SQ is pretty efficient, certainly better than QF and VA at handling severe delays. By the way it's 'Crowne' with an 'e' I believe. Enjoy!
M

On Saturday 7 September 2019, westerlies have been gusting at SYD to 56kmh so the airport is down to single runway operations.

An extremely wet Tuesday 17 September 2019 sees delays continuing into the evening for aircraft entering the Sydney Basin. B773ER 9V-SWF is on SQ211, the morning nicely timed 0935 hours SIN - SYD airborne at 1011. Arrival should be at 1959, 44 minutes tardy as this inbound had to hold slightly northwest of Crookwell for a considerable time.
S

This is the second day of operation of this more modern plane. Here's an article: 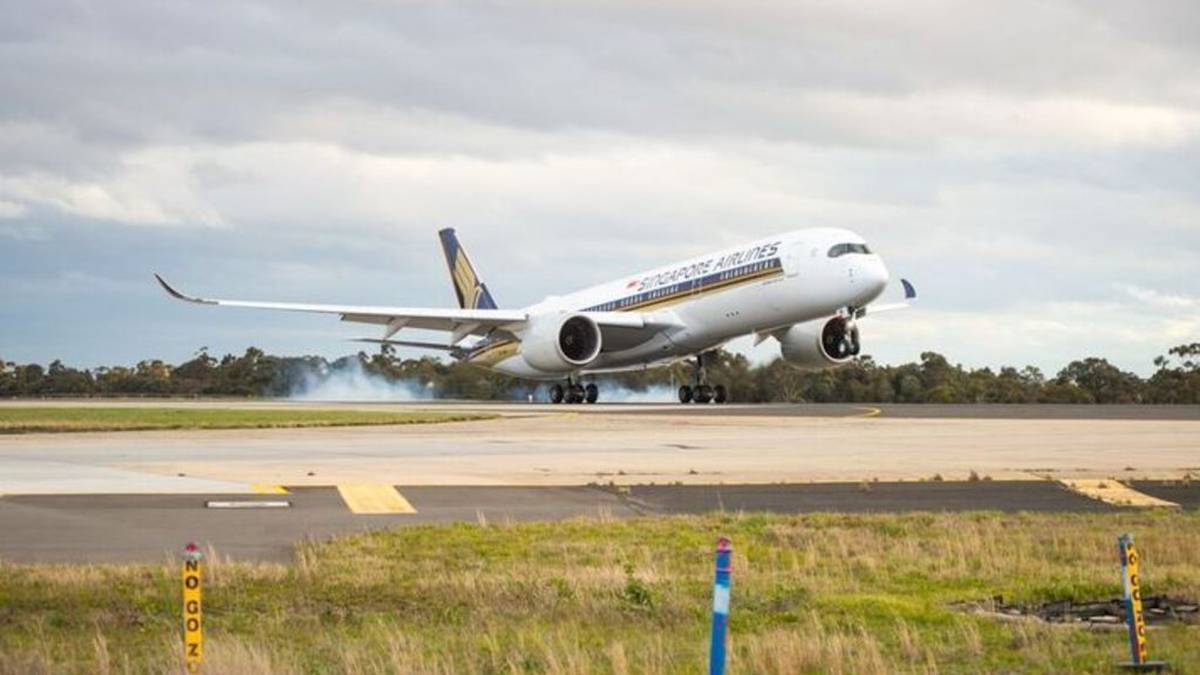 The A350 will be used on the Wellington-Melbourne-Singapore route.