PM and Vic Premier have put a timeline on construction of MEL rail link.
$10b joint venture. Construction to start in 2022 and targeting completion in 2029.
Trains to the city up to every 10 min, travel time <30 min via Sunshine.
No detail on likely operator or fare model, unsurprisingly.

What odds on
a) cost blowout
b) timeframe blowout

THE Baillieu Government will begin investigating options for a rail link to Melbourne Airport within weeks. Transport Minister Terry Mulder said the Melbourne Airport Rail Link Study would start in June and be completed by the end...

Will Melbourne get Rail link to Tullamarine

I thought it might be interresting to get some opinions on whether Melbourne will get a Rail link to Tulla. This is an issue that has been in and out of the media, and political area for over 40 years. Last year we went on the Maglev in Shanghia, and the first thought was that we have to have...

Other thing to add is that it will connect to the new Metro tunnels under construction so traverse through the city at the new stations
Arden
Parkville
State Library (connects to Melbourne Central on the loop)
Town Hall (connects to Flinders)
Anzac (good for St.Kilda road offices)

Surprised that the construction time is so long.

I'll believe it when I see it.

It should be started with the spur from Airport to Sunshine, virtually ready to build and could be done quickly.

I wonder how much compensation SkyBus will get? Even though it is often denied they'll get any, I reckon they will somehow.
C

How about a bit of glass-half-full about this announcement.

With the amount of money being offered by the federal government probably the best time to start the build, even if its a spur line from Sunshine.

Only need to decide whether its a dead end line or build it so that it can be extended to Broadmeadows as part of the suburban rail loop.

Skybus will get a cut of this money, maybe the minimum fare is $30 when skybus is still $20.00. They will need to amend their offer, there is no reason that Skybus can't do a few hotel loops like the airport bus services in other parts of the world, example Tokyo's airport limousine bus that drives you from the airport to a bunch of hotels. Some people don't want to go and get a bag and then have to buy a ticket then get on a train and then transfer to another train and then still have to walk to the hotel. A skybus tap and go on a hand held machine, with all the hotels getting a cut for offering service to the airport.

flydoc said:
Trains to the city up to every 10 min, travel time <30 min via Sunshine.
No detail on likely operator or fare model, unsurprisingly.
Click to expand...

I'm not sure how they can essentially come up with a timetable this far out, but seemingly not be able to suggest an operator or fare model

samh004 said:
I'm not sure how they can essentially come up with a timetable this far out
Click to expand...

Actually it's more like they've mooted a 'frequency' rather than a timetable.

The hours of operation are essential. Like SkyBus it will need to basically operate 24 hours to cover all flights including freight.
Z

The operator needs to mesh into the existing train infrastructure set-up and the press release stated that it won’t be a dedicated premium line; so it may well end-up being a hybrid of the MTR consortium that run the train network now. Apparently they have been talking about this for 50 years; since Tullamarine was built! No wonder people are so cynical. The road mess around Tullamarine pre-COVID was a national disgrace.

I'm showing my age, but who else recalls when you could take a tram ride directly into the Essendon terminal, with your bags, for a local fare from town?

Typically Australian approach to pricing will, no doubt, see stratospheric prices. Not "what is a public transport service reasonably worth, given that the public have paid for the construction", but "what is the maximum we can gouge from the millionaires who fly?" Doubtless, like the Sydney extortion, it will be priced just less than half the taxi fare for 2 people travelling together or Skybus "plus convenience charge", not that Skybus is any example of reasonable pricing.

samh004 said:
I'm not sure how they can essentially come up with a timetable this far out, but seemingly not be able to suggest an operator or fare model
Click to expand...

That's probably because the current contract with MTM expires in 2024 so whoever is operating the Melbourne network when this opens will be the operator.

Hope this one happens, Melbourne is a couple of decades behind on this, Perth with a quarter of the people is nearly there on a railway link to the airport.

I'm a frequent user (as much as anyone can be, these days) of the Sydney rail link, especially when it's just me going from Chatswood to the airport. I'd almost certainly do the same in Melbourne. My family all live near Mooroolbark or beyond Frankston. Nothing says "cheap" like 30kg of luggage and a desire to avoid either a taxi right across town, or a messy transfer from bus to train.

themaiz said:
I'm showing my age, but who else recalls when you could take a tram ride directly into the Essendon terminal, with your bags, for a local fare from town?
Click to expand...

I can remember, but only at a primary school age.

Later on they took it up to Airport West shopping centre.


Bundy Bear said:
Only need to decide whether its a dead end line or build it so that it can be extended to Broadmeadows as part of the suburban rail loop.
Click to expand...

suburbanrailloop.vic.gov.au
(I can just see people jumping off at Broady onto the 901 bus to avoid the Airport rail tax.) 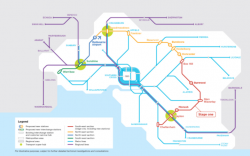 One minor niggle, the announcement is touting a 2 hr travel time from Bendigo to the Airport. That's nothing special ... it could be achieved today by public transport if the timetable of the hourly Sunbury-Airport bus lined up with the Bendigo trains (and comes without a gate fee).

Even without the bus, for a similar price to gate fee, you can also get a seamless transfer to/from Uber/Didi at Sunbury station (pickup/dropoffs at same level as the platform - no lifts, stairs etc). Last time I did this it was just $25 for the Didi, and obviously was dropped right at the departure level of the airport in 1:45, very quick and efficient!
S

We will pretty much pay for something that maybe only tourists use or the infrequent traveller. Business people will get a taxi for the 6am departure/10pm return, company pays for it and why risk being caught in Sunshine in a suit? Also, why not set it up so trains from the north and west e.g. Geelong, Ballarat and Bendigo could go through the airport station.

dajop said:
Even without the bus, for a similar price to gate fee, you can also get a seamless transfer to/from Uber/Didi at Sunbury station (pickup/dropoffs at same level as the platform
Click to expand...

Never thought of that! Would Sydenham (a bit closer) work just as well for Uber/Didi, or not as many trains stopping there?

Ah.. just realised that the comment was about trains coming from Bendigo. But can someone tell me if Uber from Tulla to Broadmeadows, then on to train, makes sense if the aim is "cheap"? Or a local bus?
Last edited: Monday at 2:36 PM

themaiz said:
Or a local bus?
Click to expand...

Only way is to tunnel it like what SYD is, and what PER is doing.
Maybe go under the Tullamarine Freeway, part way?
Granted that PER is only adding 3 stations, so will be lower cost, WA govt has said theirs will not have any extra, ie, no gate fee.
Thanks for the info, hopefully we will be around to see it happen, touch "aircraft" metal.
Re: Uber at Melbourne Airport, never used it, but I would say Uber, Tulla to Broady, would be $25.
Never game enough to accept those guy at Tulla airport asking quietly, pickup/want a ride, knowing its against airport policy for them to do it.
Did try a taxi from Mentone to Melbourne city one, few years ago, I think I paid $75.
You must log in or register to reply here.
Share:
Facebook Twitter Reddit Pinterest Tumblr WhatsApp Email Share Link