quite happy with this upgrade on a free night, plus the hotel is massively refurbished since i last visited years ago. Will stay again.

Wow - very nice! I'd have expected this to be a property that never/rarely upgrades. Were they particularly busy and needing to free up some of the lead in room category?

I don’t think they were particularly full, during the day there was always no more than a dozen or so people around the pools etc and there isn’t much else to do. My status gets me a guaranteed upgrade but even I didn’t think I would get what I got.

eric2011 said:
I don’t think they were particularly full, during the day there was always no more than a dozen or so people around the pools etc and there isn’t much else to do. My status gets me a guaranteed upgrade but even I didn’t think I would get what I got.
Click to expand...

OK, very good. I'm also at Spire Ambassador, but I've been unsuccessful with upgrades so far whenever I've stayed on reward nights. These are not actually guaranteed, like a paid stay allows for. From the Ambassador T&Cs:

Guaranteed Upgrade​
16. On IHG Rewards Reward Nights and Free Nights, the guaranteed upgrade benefit is not applicable and is subject to availability. Refer to IHG Rewards terms & conditions.​

oliver_adl said:
I just had 4 nights in a suite at the new Crowne Plaza in Hobart.

Club lounge is nicely designed and the evening canapes are great.

The main restaurant area on level 4 feels a bit like an airport lounge and was quiet most of the time we were there. Food there was not really special; Hobart has a lot of good dining on offer so I wouldn't bother eating at the hotel next time.

Valet parking might be a bit tricky because of limited space in front of the hotel but I never had an issue with it during our stay; probably only problematic if arriving at specific times. As mentioned above Concierge are right inside the main entrance and moved the car on quickly when we dropped it off. $25 a night for valet parking is cheap...

There's a top level separate restaurant/bar which do good coughtails (didn't try the food there) but it's a separate 'venue' so you can't charge to the rooms. Staff said that is changing in future.

Staff everywhere in the hotel were very friendly and helpful; I think because it's new they're all eager to do a good job and not bored of their roles yet.

The suites have an open style bathroom with sliding glass doors; overall design is really good the only issue we had was that the lighting switch system is a bit complicated and I had to physically unplug a LED light under the vanity as I couldn't find a way to switch it off (it's considered a 'night light') since it was far too bright.
Click to expand...

dairyfloss said:
OK, very good. I'm also at Spire Ambassador, but I've been unsuccessful with upgrades so far whenever I've stayed on reward nights. These are not actually guaranteed, like a paid stay allows for. From the Ambassador T&Cs:

​
Guaranteed Upgrade​
16. On IHG Rewards Reward Nights and Free Nights, the guaranteed upgrade benefit is not applicable and is subject to availability. Refer to IHG Rewards terms & conditions.​
Click to expand...

Yes of course you are quite right. Guess I must have been extremely lucky.
O

VPS said:
Any idea what hours the club lounge is open and what time the evening canapes come out
Click to expand...

I think it was open all day. The canapes if I recall right were supposed to be in 2 sittings 6PM and 7:30PM but we just turned up whenever it suited us and they had no issues serving us. I think if they were busy they might be a bit more strict about the 'slots'.

Staying at Hotel Indigo Adelaide Markets, currently IHG Gold (although I will be Platinum after this stay).

Received a room upgrade on check-in, late checkout wasn't a problem and I was offered a choice of 400 points or a drink voucher at check-in. I chose the drink voucher and was able to use it for any drink worth up to $25 (including coughtails).

Very happy with the hotel - it's just a shame the rooftop bar is closed on Sundays! 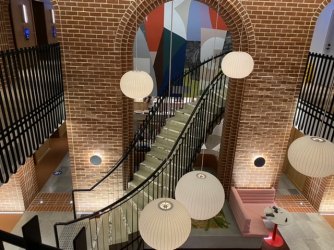 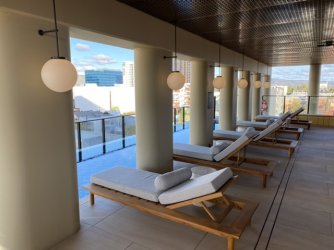 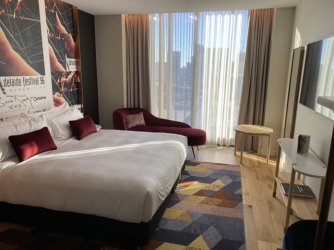 jjonnboy said:
Is anyone headed to the new Indigo Adelaide? Like most, I'm keen on new properties and would love to receive some feedback.
Click to expand...

I did a few nights here at the end of May. Really enjoyed the stay.
Status: Platinum Ambassador
Booked their opening special rate. Did not receive an upgrade.
Drink vouchers vouchers provided and to be used for beer and wine only, so they have tightened that benefit up a bit.

Their rooftop bar is really popular on Fri & Sat nights and without a booking we couldn't get in easily. Friday night after 10pm & Saturday night had no luck after returning from dinner, but when we were up there it had a good vibe and I can see why it is popular.
R

Regarding Holiday Inn drink vouchers ...
( for Spire Members )
The mention of "coughtails" ...
I presented one to bar at Warwick Farm ( Sydney ), and was asked to pay for a 'bourbon and coke' ( house ) ... as it wasn't considered a 'coughtail' !!
( spoke with manager, and eventually sorted ).
But some of bar staff are confused by the vouchers.

On upgrades on Reward Stays ....
I have been getting a phone call from my Holiday Inn bookings, asking for an update on numbers staying in room. If only two, then offer of upgrade to King Suite ( but I stay with my three kids, so we need the twin queens ..... )
But nice they ask ....

The old Bar behind reception is closed now. There is now a bar next to the Redsalt restaurant that is OK but less cosy. Nice staff. Buffet breakfast being served which children lapped up (at a cost). Used the side entrance to casino (ended up even on low-stakes blackjack) 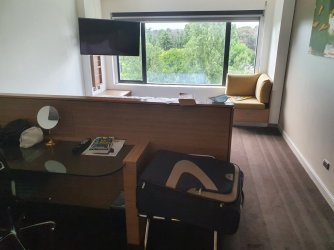