VPS said:
I do find it interesting that some cafes (and it happened to me recently in Adelaide) that you go in at 3.05 and they say no the kitchen closes at 3pm. I wonder if it's the employees who just want to get out of there and if it was the owners they could think - here's another $30 or $40 I can do that.
Click to expand...

Well it's always down to the owners. They're probably only paying the employees to a specific time who then have a few hours off until dinner time. With tenuous employment, and wage theft rife there is no benefit for employees to donate more time to one of their employers.

VPS said:
I do find it interesting that some cafes (and it happened to me recently in Adelaide) that you go in at 3.05 and they say no the kitchen closes at 3pm. I wonder if it's the employees who just want to get out of there and if it was the owners they could think - here's another $30 or $40 I can do that.
Click to expand...

If the kitchen is closed, fryers / grill is off and the staff are cleaning up, completely get it. However when the staff are still there, kitchen is still operating, but only for cake and biscuits, until the dinner time service, and there are empty tables, I was bemused. I am aware that quite often pubs here and in Oz only do hot food 12 to 2, and then at dinner time, as the staff go home, so expected to not get a meal, but when it is all there, and lots of restaurants and cafes are in the media about going broke after lockdown, and office people not returning to wok, I think you need to also help themselves ........ it is the new normal, apparently.
M

lovetravellingoz said:
and one day we spent walking along the canal system including the Foxton Locks, which is two staircases of 5 locks, and are the largest flight of such staircase locks on the English canal system. It had a great pub for lunch too The Foxton Locks Inn.
Click to expand...

Foxton Locks are hubby's favourite place to take our visitors when they visited us in London!

Myrna said:
Foxton Locks are hubby's favourite place to take our visitors when they visited us in London!
Click to expand...

Canal and River Trust "are looking for a small group of volunteer lock keepers to help keep the historic tradition of lock-keeping alive at Foxton, where lock keepers have been part of waterway life for hundreds of years," said a spokesperson.

"The volunteers would join an existing team in welcoming passing boaters and helping them through the locks. Full training is provided and people of all ages and experiences are encouraged to apply."

Volunteer lock keepers work on a shift basis between April and October, with some even staying on to help care for the site over winter.

The Trust is ideally looking for people able to give at least one day each week and is particularly keen to hear from people able to cover the role over weekends.

Another early start today, first of is the Foulridge Tunnel, it is only open to passage from the north east entrance from the hour to 10 past the hour, so we entered behind another narrow boat at exactly 8:00am 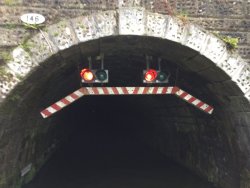 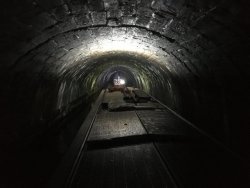 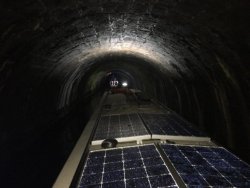 The Foulridge Tunnel is a canal tunnel on the Leeds and Liverpool Canal in Foulridge, Lancashire. Also known as the Mile Tunnel, Foulridge is 1,630 yards (0.93 mi; 1.49 km) long and was built by Samuel Fletcher, following Robert Whitworth's 1789 survey. The tunnel is the longest in the country to allow passage of canoes and kayaks

After the tunnel's opening in May 1796, the Leeds Intelligencer described the tunnel as "the most complete work of the kind in England, if not in Europe".

A local story purports that on 24 September 1912, a cow fell into the canal at Blue Slate Farm, Colne, near the southern portal. She then swam the length of the tunnel before being helped out and revived with brandy (or rum) at the Hole in the Wall pub in Foulridge.

Having no towpath, vessels traditionally navigated the tunnel by legging while the horses traversed above the tunnel. This practice ended at Foulridge in 1886 after the drowning of a legger; a double-ended steam tug was introduced in 1880 to haul vessels through and return without winding. A diesel tug later replaced the steam boat; this service ended in 1937. To ensure that boats would not meet head-on in the tunnel, a telephone system was installed to control passage. In 1963, this was superseded by traffic lights.

In 2017, the Canal & River Trust allowed unpowered craft such as canoes and kayaks to use the tunnel.

After the first tunnel for the day we had a lovely cruise through the country side and then we paired up with the other narrow boats as we descended the Barrowford 7 flight of locks. In all the previous locks we had been ascending, now we were on our way down. 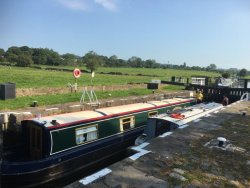 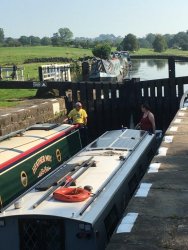 We then bid our companion boat farewell as we stopped and moored up at the private Morrisons Supermarket moorings to stock up on essentials. We had been warned to not stop anywhere in Burnley after we left the Barrowford 7 flight of locks (Colne) other than the Morrisons mooring and just keep going and do it in one day.

There was a definite change in the canal, there was floating and submerged rubbish, and the weeds in the canal become much worse. There were interesting characters making “deals” in parks, and we understood why we were advised to not stop. 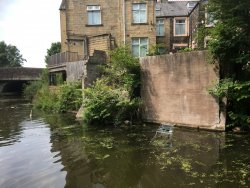 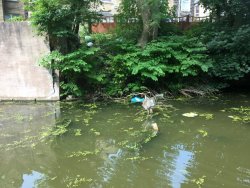 We then came across the Burnley Embankment, also known as the straight mile, the embankment runs straight through the centre of town. We were held up for half an hour with divers in the canal doing repairs on the aquaduct. Pretty much as soon as we left the embankment, the boat overheated. This time, it turned out the overheating was caused by weeds being wrapped tightly around the propeller shaft and causing the engine to work too hard.

After clearing the weeds, we continued through Burnley and went through the Gannow Tunnel (559 Yards). 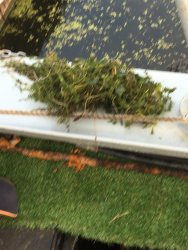 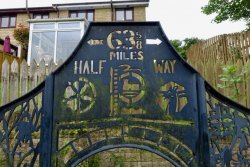 We then moored up in Rishton at the visitor moorings just before 9:00pm

How sad to read that Burnley was a no stop. Barrowford, Burnley, Nelson and Colne. My parents would be sad.
N

Really enjoying your trip report and the photos. Looks like the weather is holding out!

bpeteb said:
How sad to read that Burnley was a no stop. Barrowford, Burnley, Nelson and Colne. My parents would be sad.
Click to expand...

Burnley looked nice in itself. The canal was full of rubbish, there were trolleys bikes, children's toys etc.

I'm not easily frightened, but as we came in to Burnley, I had our son go and sit inside the boat, and lock the front doors. There was some really concerning things going on in a park, and we were getting eyeballed by a gang of young men. They were standing at the entrances to the park and walking the wall as we cruised past. Not sure what was happening, but did appear drug related. We had stopped at the Morrisons supermarket that a mooring on the non towside, but was advised not stay overnight, and if we did, to put out own lock on the gate, as the local kids had got access to the anti vandal and were able to get in.

During out trip, as we were going through locks, and mooring up, wed talk with other boaters, one experience coupled grabbed our canal map book, and made notes on it of good moorings and services and where to be cautious. They told us of the large Tesco on the "Burnley Mile", and said the husband would wait with the boat whilst his wife went shopping for what they needed.

There was a really nice Canal and River Trust services, with a shower, toilet, bins etc, we stopped there for a quick shower, but had been told not to stop overnight, as kids are known to throw rocks at the boats from the towpath side.

So yes very sad. Best your parent remember it how it was, as it now has a bad reputation with boaters, and from what I saw, could be deserved.

In regards to Colne. Barrowford (especially through the locks) were beautiful, and there were lots of boats moored at the top of the Barrowford locks. If we hadn't paired up coming down the locks we would have stopped and walked to the Boundary Outlet, which my wife really wanted to do.

Again another early start, we had a number of lock flights, and wanted to get a nice area as we were meeting a builder friend and mooring up the boat to go and retrieve our cars from various parts of the north of England.

So I set off whilst the missus and the lad were still asleep. It was a beautiful time of the morning, and cruising through the rural areas as I headed into Blackburn, Mrs Reggie work up and made breakfast as we cruised through Blackburn, in the middle of town we came across the Blackburn 6 lock flight. Even though they were not set for us, we had a beautiful run through them on our own.

On from there we cruised though even more rural areas, and then hit the Johnson’s Hillock flight of 7 locks. We paired up with another boat, which meant assistance on the locks and a break for my lad. At the bottom of the flight we moored up early afternoon in the most idyllic little village of Whittle-le-Woods in Chorley. A little up the canal is Malthouse Farm Pub which was playing live music, and a bit further up was a David Lloyd country club. I fell in love with this place, but doubt we could afford to live here.

We relaxed until we met up with our builder friend, and started to make plans for remodelling the inside of the boat when we reach our marina. 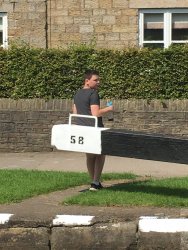 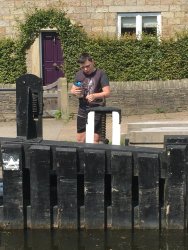 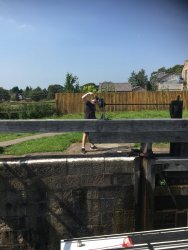