yes but do you just fly for status, or to go places and do things? If you say they won't help you keep your status then you won't have incentive to fly more.. or at least fly QF/partners more is that a reflection that, covid issues aside, you would continue to fly the trips you normally would, but perhaps not with QF, or you would fly LESS because of the status issue?

I mean status is great and all don't get me wrong. and yes, I have done status runs to retain on occasions, but it's not the primary motivation for me in terms of why or where I go places. It will dictate to an extent who I fly with (eg if I am flying intra USA then I would likely favour AA, and soon AS, over others). Now if you are saying you'd still fly wherever but lose some loyalty to QFF then fine it means you can move elsewhere for status or just go BFOD and not worry so much which many are doing.

I continue to say that as this drags on QF will have NO choice but to continue things like StatusKeeper, boosts and all the rest. Maybe TTR will disagree a little but to me it's the old axiom that it's easier to keep a customer then get a new one. Ignoring VA's woes as motivation for people to potentially move to QF, they will be wanting to retain as many as possible and it's fairly painless for them at this point to keep StatusKeeper in some form while borders are closed, people can;'t fly much etc.

I do absolutely concede that weak VA2.0 which seemingly will not chase high value passengers and provide real competition for the higher yield/status pax implies QF may use the logic that the competition (domestic anyway) is unlikely to lure, say, a Platinum who has dropped to Gold or Silver, but I still feel they will make effort.. They'd obviously much rather keep that Platinum for when things return that will have that incentive to stay.

I am a broken record I know but seems to me that people seem to preempt a lot what WILL happen when the end is nowhere in sight (or at least every time it seems like it may be, things change again). I don't think anyone is in a good situation to know what will happen and worrying about status in 2021, 2022 etc at this point kind of seems like a bit of wasted energy to me - I would be willing to bet big money (at short odds!) that QF will keep status perks for pax. They will do more. It is certain. Either way right now we don't know when we will be able to fly in a general sense let alone when or where. Indeed just today at the AGM Joyce indicated no USA/UK until either vaccine or possibly another 12 months time. With that in mind and QF has been clear that they see little travel even in the medium term then reality is that maybe in first half next year we should get more domestic travel and focus on that.. maybe some other bubbles but really it changes so much you just can't possibly know how it will be. I am sure I wrote earlier this year in May or June that things might be a lot better by November... well nope. Well at least not unless you're doing intrastate type trips in NSW/QLD/WA etc.

So honestly, and I mean no offence to any poster here in particular but really I think folks needs to settle down and just wait and see. Months back people were writing about how they'd lose status and QF was doing nothing after the extensions and voila the boost and support payments came in and people were happy (mostly)... so let's just wait and see what happens and try to, as the saying goes, Keep Calm and Carry On

It’s an effect of QF’s drip feed approach to retaining status, and its flaws. I regularly self medicate with paranoid pills. That and Dr Qantas’ occasional doses of these status steroids has the side effect of the occasional meltdown.

I have been stuck on about 550 SC's since Mid march which will 'expire' in 8 days and then back to 600 a little after with status keeper.

There is no obvious reason in the next year for me to be chasing WP as without international my LifeTime SG would seem an adequate level.

Noting this from the statuskeeper page:

I suspect that back in July, they did not anticipate the current situation.
Last edited: Oct 24, 2020

serfty said:
I suspect that back in July, they did not anticipate the current situation.
Click to expand...

Back then it seemed like Australia was absolutely on top of it.

Sorry if its been asked before I am LTG and currently sitting on 670 SC with an anniversary date of 31 December 2020 As a gold if I ended up making it to WP before the end of the year would I then get the 600 Status credits and would my status be extended as WP through to December 2022?

Thank you for any feedback.

Ansett said:
Thank you for any feedback.
Click to expand...

There is nothing specific about this in the page I linked to in my previous post. It suggests the boost would relate to the status at the time the boost is applied, but I have not seen any anecdotes to confirm that.

Note the boost is also given to those relying on their lifetime status.

serfty said:
There is nothing specific about this in the page I linked to in my previous post. It suggests the boost would relate to the status at the time the boost is applied, but I have not seen any anecdotes to confirm that.

Note the boost is also given to those relying on their lifetime status.
Click to expand...

I saw that before posting and looked around for asterisks - could not find any, so yes perhaps more than merely suggests ... but anecdotal confirmation would be good.
H

serfty said:
I saw that before posting and looked around for asterisks - could not find any, so yes perhaps more than merely suggests ... but anecdotal confirmation would be good.
Click to expand...

I thought someone has already confirmed that they during their year achieved a higher tier and got the higher status credit boost.....only 24 pages (450 posts) to look through

My status credits balance was wiped briefly and is now back to 300... Thanks for the boost QF!

AIRwin said:
My status credits balance was wiped briefly and is now back to 300... Thanks for the boost QF!
Click to expand...

Similar here, although the net difference was +40 SC.

Just got 600 status credits
Mine expired yesterday. Interesting as once again that changes my thoughts with possibly flying with that 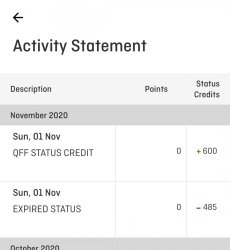