Then another fail. Same old menu since September for MEL-AKL, 11:45 flight. 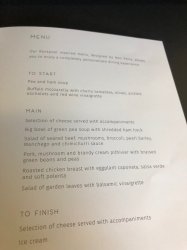 This was the buffalo mozzarella: 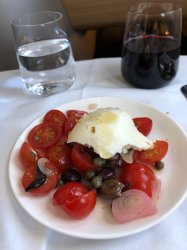 Bizarre presentation and cheap tasteless tomatoes and olives. The mozzarella itself was very nice.

But I did enjoy the pie: 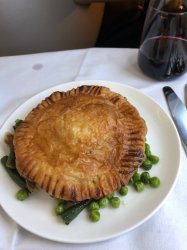 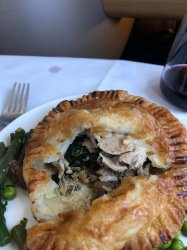 Service was pretty good. My order taken first before people in front of me (P1 sitting in 2K). Asked for a drink when order taken and the FA went back immediately to get it done. No pre-lunch drink round offered.

Also had the cheese but no pic and it was a real letdown after the wonderful cheese plate on VA just a couple of nights before. Was offered both the cheese and the ice cream stick but declined. Too full!

kermatu said:
Then another fail. Same old menu since September for MEL-AKL, 11:45 flight.

Still? I had that damn Pithivier three times already!

Surprising I hadn’t had it before despite getting this menu a few times. Glad I did. I’m flying the same route again shortly. Hope the menu will have changed by then. I’ve just done another couple of VA flights and the food there is just so much better although a bit less substantial trans-Tasman.

kermatu said:
Surprising I hadn’t had it before despite getting this menu a few times. Glad I did. I’m flying the same route again shortly. Hope the menu will have changed by then. I’ve just done another couple of VA flights and the food there is just so much better although a bit less substantial trans-Tasman.
Click to expand...

I've decided to try Air New Zealand some time in May, just to see what I'm missing. Not keen on trying Virgin, their corporate colors alone make sick from just looking.

Berlin said:
I've decided to try Air New Zealand some time in May, just to see what I'm missing. Not keen on trying Virgin, their corporate colors alone make sick from just looking.
Click to expand...

Always enjoyed Air NZ domestically but never tried them internationally. VA service just blows QF away, so while the J seats on the 737s obviously can’t come close to the QF A330s, the small cabin, with zero intrusion from Y pax, great food and constant service makes it a very good alternative, particularly when also flying trans-con on the VA A330. Cheaper too.

Still water only pre departure
2 options: quiche Lorraine or mushroom omelette
Quiche had run out by row 2.
Interesting no cold option, but 2 hot options better IMO (compared what used to be offered on this route at this time of day)
Juice was the Just Juice brand seen in supermarket isles

Quiche was tasty and very similar in taste to the VA quiche that used to be serve ad nauseum on this route. (CNS/BNE)

I will report back on this in June once I've given it a go. But now back to Qantas to stay on topic! 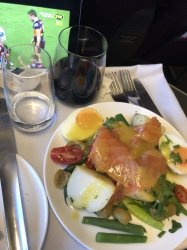 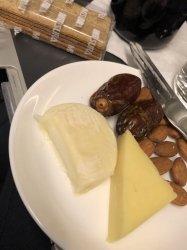 I’ve had the roast chicken before and it’s always been good... but this one was a miss 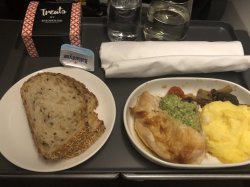 Were you streaming the footy?

Rangalad said:
Were you streaming the footy?
Click to expand...

Yep. Hit and miss... but can get good quality streaming when it’s available.

Breakfast on QF423 SYD-MEL just ten minutes ago (I love in-flight WiFi), ancient 737 aircraft. One of the nicest toasted sandwiches ever and you even got a hot muffin and some yoghurt with it. And they actually had three options: The toastie, a spinach and ricotta quiche or a fruit salad. One can really not complain about this on a 1 hour flight! 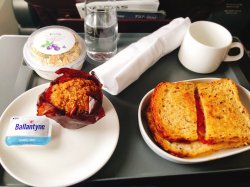 Service also attentive and friendly though one of the flight attendants must have mixed up the airline she works on and made very Virgin-y yokes. And like on Virgin, we might be flying but silly jokes by the crew never really fly Tata-tsching!

Not even worth discussing the subsequent QF3 SYD-HNL... when will QF be getting rid of the ancient B747s with the old J seats. Started bad, food made it worse. 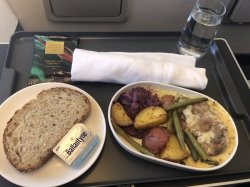 chooms said:
when will QF be getting rid of the ancient B747s with the old J seats
Click to expand...

Not even worth discussing the subsequent QF3 SYD-HNL... when will QF be getting rid of the ancient B747s with the old J seats. Started bad, food made it worse.
Click to expand...

I'm doing this route in June - what were the meal choices like on the SYD-HNL sector? Bad options, or badly done?

It seems that out of AKL you now get the new menus while out of Australia they still got the same old menus from September last year. I can't state is often enough that Qantas, this is not good enough!

Also not good enough is treating the cheese platter and, can you believe it, the ridiculous 8-leafed salad a "main choice" . The menu read as follows (I've tried to rotate it now using three different types of software and for some reason this particular photo just always shows sideways once I upload it here- so my sincere apologies!): 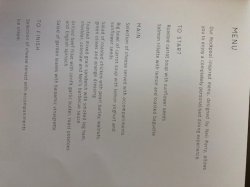 Given that I'm allergic to seafood, I had no other choice but the carrot soup and then selected the steak but without spinach to avoid that the meat and potatoes end up sitting in a pool of poison-green spinach water (yikes). As always flying out of Auckland with their extremely sh%%#y Qantas lounge, I was starving so tried to get a large soup as a starter which usually worked but in this case the young crew member seemed very inexperienced so she "wasn't sure if this is possible". I then told her it's not about the soup but rather about the dollop of lemon yogurt so even just a little bit of that on the small portion of soup would do.

Guess what I got delivered? A small bowl of soup with no yogurt in sight. "Carrot soup" sounded rather boring but it was actually alright. I bet it would have been awesome with some lemon yogurt 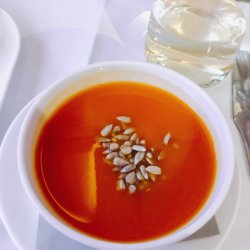 After the soup, the service was taken over by the much more senior cabin manager and he was SO much better than his younger underling earlier. The typical really good Qantas service, super attentive, refilling the drinks without even having to ask him and so on. The main, however, to my big surprise got served to me by the First Office who even confirmed that it's "Without the spinach Mr. Berlin, like you ordered". This is only the second time this has happened to me, first time was a few months ago when the captain suddenly came out mid flight to top up everyone's drink. The steak also looked very nice and the meat quality was excellent though too dry as ever so often. The garlic and the very buttery potatoes helped with it a little at least so all in all I was very happy with this meal: 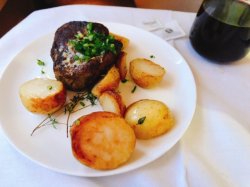 Notice how Qantas even has two stalks of Rosemary on top of it. It's these little details that really make your meals special and I find Qantas to always be excellent in these things.

Unfortunately, the story is not quite over at this point: After a pleasing cheese plate and a scotch or two, I went to the loo once last time before landing. And guess what I saw the crew munching on in the galley: Leftover carrot soup. With lots of bloody lemon yogurt left over even

This flight turned out to be one of my very very few cases recently where the flight was just meh and this mainly due to a quite disengaged crew. The first disappointment was the menu which was STILL one of those September 18 ones. I've posted it before, it's the one with Laksa as a starter or main and a beef pie as the so-called 'main'.

As per usual I asked if I could get the main sized soup and then the pie but this particular crew member (she was actually the 'Manager' even) was clearly in the wrong job so I got lectured that there is only one choice from the starters and one from the mains per guest which would be bad enough if the main was at least something a bit more substantial than a party pie She then pretended to having asked for the full bowl of soup but unfortunately, they "didn't have enough". Needless to say, like my previous flight on the outbound, I later saw her herself enjoying not a small but a big bowl of the Laksa! Qantas- your portions are outrageously tiny anyway for an international J flight and choices very limited and repetitive so please, please at least make sure that it a passenger is hungry and there's enough on board, that you own crew not deny your paying J class passengers food so that they can munch it themselves afterwards I found this so outrageously bad and not typical of Qantas either that the first thing I did when getting home was the unthinkable: I've booked my first ever trans-Tasman return with, shock horror, Air NZ. Just to see what you get 'on the other side' and to not be left AGAIN with the same menu. 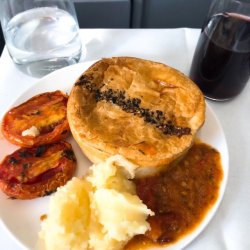 At least the (tiny) bowl of soup was as always really really nice and the pie is also both nicely presented and tasty. Flying out of Melbourne on this one, I had that super creamy, almost liquidy white cheese on the cheese platter which others on here have mentioned already. It was indeed superb and seems to be a Melbourne-special.

All in all not the best flight I had. In this case the crew "manager" turned out to be a cow generally, I was not the only passenger who notices as I had a bit of a chat by the luggage belt on arrival. Her grumpiness did not go unnoticed Qantas!

Berlin said:
The main, however, to my big surprise got served to me by the First Office who even confirmed that it's "Without the spinach Mr. Berlin, like you ordered". This is only the second time this has happened to me, first time was a few months ago when the captain suddenly came out mid flight to top up everyone's drink.
Click to expand...