I received this marketing email today from Qantas Frequent Flyer: 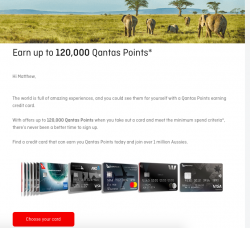 So, according to Qantas, over 1 million Aussies currently have a credit card that earns Qantas points. No wonder award availability is so hard to get - you're competing for seats with literally millions of other people that are also collecting Qantas points from their credit card spend!

Why is the fact that 1 million other Aussies already have one a good reason to apply for a Qantas points credit card? With so many other Australians earning Qantas points, surely I'd be better off getting a card that earns Velocity points, KrisFlyer miles or Asia Miles instead.
C

I figured that out about 7 or 8 years ago. We use Kris and AA for much of our family international rides and Velocity and Qantas for domestic rides.

It would be "Nice" to be able to earn significant AA miles via CC spend; sadly for most Australians, such is not viable.
K

"That can earn" doesn't mean it's earning? I've got 3 credit cards where I can opt in to earn QFF points but I don't.
T

The man with no name

I passed on English credit cards and continued with BankWest World seeing we are in the UK for less than 2 months each year.
With US credit cards my youngest favourite son now has a Bank of America credit card without having a Social Security Number. He started it with a covered deposit and now rhey have released that deposit. He is building a good credit history to go the next step.
My eldest son has an AA credit card that runs off mine so he can use his AA miles and quickly pay the redemption disbursements. This month I was able to use a new Amplify points earning card to run up many Amplify points for him in a couple of weeks. Getting that card issued was a bit of a horror story but it finally issued. I had to talk to a supervisor twice in some foreign land to get to YES for him while he was present.
i do treat this as a bit of a game and the results are better than playing chess.

Our QF earning CCs has taken a dive that would put a 737max to shame.

We’ve gone all in on warehousing and SQ suites.
C

For Qantas points I have used an Amex card for some business expenses at the office. Last week I used Velocity points to get two in our family to the east coast and back in an A330 Suite as Qantas had nothing suitable at such short notice.
L

Hardly a selling point, I agree.

'Join 1 million Aussies frustrated that they can't redeem their points for anything other than a toaster.'

I would have expected a lot more than 1 million people to have a QF card. Suggests most are earning bank 'own-brand' points.
C

With 13 million members the Qantas loyalty scheme needs way more seats to be made available for redemptions. The scheme has become a victim of its success.
L

cove said:
With 13 million members the Qantas loyalty scheme needs way more seats to be made available for redemptions. The scheme has become a victim of its success.
Click to expand...

That depends on your perspective.

From Qantas' perspective, it's the ultimate scam scheme. Sell QFF points to banks and give customers no option but to redeem those points at obscene rates for toasters. It's basically a licence to print money.

I used some Qantas points on the weekend and I flew in economy.
Wanted to keep some for a rainy day.

It can be wise to use FF points for economy, but only on the most expensive routes. In Australia, I guess that might include some of the routes to places in remote places. I have only ever used FF points in economy once - a handful of points to fly Yerevan to Edinburgh one way about 12 years ago. There was no J availability and the cash Y ticket was eye-wateringly expensive...

Isochronous said:
1m individuals with a QF earning card or 1m QF earning cards on issue - e.g. if I have 5 cards that direct sweep to QF am I counted once or 5x?
Click to expand...

“over 1 million Aussies” is pretty self-explanatory

True, but I wouldn't rule out Qantas being clumsy with their words or making assumptions that aren't true.

That said, I wouldn't be surprised if more than 1 million Australians do in fact have a credit card that earns Qantas points.

Not necessarily, when it comes to Qantas' use of the English language.

With the number of QFF CC on the market and CC churners it is no wonder rewards seats are hard to come across unless you are WP1 or WP.
I agree with the AFFer who posted up thread about warehousing points to other programs.