Until recently there had been no popular 'chain' hotels in Hobart for a while. This was addressed a year or so ago with the opening of Ibis Styles and Marriott is going to open one of its 'Luxury Collection' branded hotels in maybe a year. That's in a cracker of a location and should be a hit for those willing to pay (I question whether Hobart can sustain it, but we'll see).

Filling in the ground in between is the recently opened Crowne Plaza, which is on Liverpool Street in the CBD. I stayed a night to try it out when I was attending a family function in the city.

Its a new build, and opening has been delayed due to COVID. This pic shows only half of it - there is another wing stepped back behind the one shown. 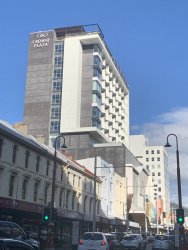 The immediate location doesn't really have much to offer. There are no notable restaurants nearby, but the waterfront isn't too far to walk and North Hobart would be a 10 minute ride.

I had my car and the first issue I had was parking. I was advised via a call from the hotel that there was no parking on site and I should park at a 'nearby' public car park, for which I'd get a discount. I naturally assumed that there would be a drop-off space outside the hotel so I could drop my bags - but no. That was annoying. The car park is about a 10-15 min walk away and luckily I only had a carry-on, but if I had a full suitcase it would have been ridiculous. I was subsequently told that the 'No standing' spaces outside can be used for drop-off, and they'd give me a tag, but Liverpool Street is a narrow, busy street during week days and there is nothing to indicate hotel use. Would a visitor, unfamiliar with local rules want to risk parking in a no standing zone? 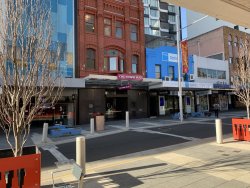 There is a club, on the 10th floor with good views of the city and Mt Wellington. Club floors on 10 and 11. I didn't have access.

I had a corner king room on level 8, the second price up from the base. Quite nice, with a very large bathroom in travertine and glass, with full sized bath, separate walk-in shower, separate toilet, double basin and luggage area. Annoyingly, no door on the toilet and someone standing at the basin can admire their partner on the throne via the mirror. 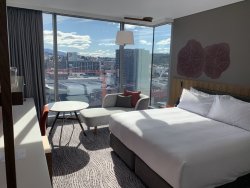 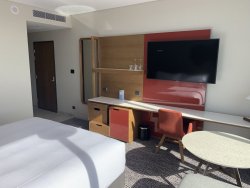 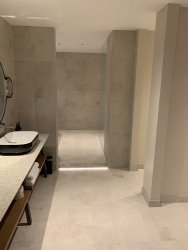 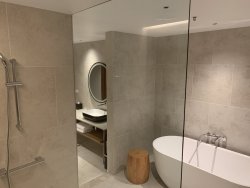 Restaurant and bar on the 4th (reception) level. A nice outside deck, with views of Mt Wellington and gas heaters and blankets available for the Tas winter. 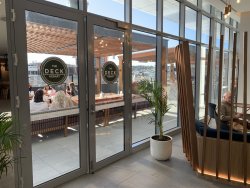 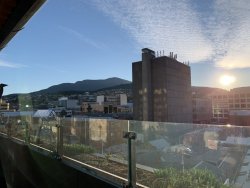 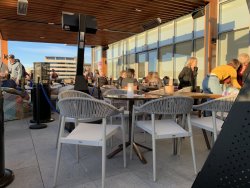 I ate out that night, but had breakfast in the restaurant. Its a covid buffet system - choose what you want & they serve. 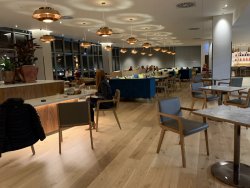 Overall: I liked it but the parking arrangements are not good. They should clearly tell people about the parking outside (were completely silent on it when they called me about parking!) and negotiate with the council to have it marked. I just called again inquiring about parking to check if they had refined things and it was still vague. They suggested I could use the 'Uni car-park if its quiet'. What is that meant to mean to a visitor?

Although there isn't anything of note in the immediate vicinity of the hotel (except CBD shops), Hobart is a small place and the waterfront, Salamanca Markets and some decent restaurants are within easy walk. On Sunday mornings, the Hobart Farmers Market is a minute away in Bathurst Street. 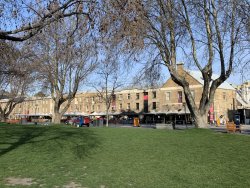 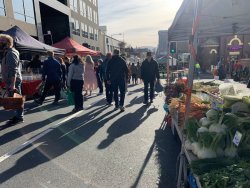 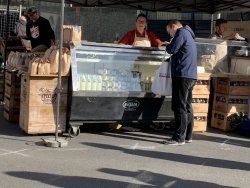 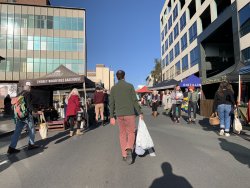 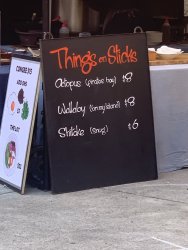 RooFlyer said:
Its a new build, and opening has been delayed due to COVID.
Click to expand...

'Beyond my wildest dreams': Emails reveal how hotel imported workers during lockdown

As construction of Hobart's Crowne Plaza hotel was coming to a close, there was a frenzied email exchange about how to get workers around coronavirus restrictions to finish the multi-million-dollar development, documents reveal.

I was at that market this morning.....

A bit unfair about local restrs there moite.. Urban Greek maybe 250m around and up Murray St, Templo a bit further up, and Fico on Macquarie. That’s 3 pretty damn good ones without stretching the meaning of those words, and all closer than schlepping down to Salamanca. However, on the matter of parking !!

BCons said:
A bit unfair about local restrs there moite..
Click to expand...

Was the hotel room quiet from outside noise, like were the windows double glazed, or you could hear outside noise.
Thanks.

AustraliaPoochie said:
Was the hotel room quiet from outside noise, like were the windows double glazed, or you could hear outside noise.
Thanks.
Click to expand...

I always ask for a quiet room, and check that issue on check in. Assured that it was a 'high floor ...' etc. But as usual. the check-in people really have no clue. I think the windows were double-glazed.

In my case my room was right above the guy providing entertainment on the bar deck 4 floors down. Fortunately he stopped around 10:45pm.

As for traffic, I was on the street side. Although Liverpool street is only 1 lane past the hotel, at night you get a few hoons and motorcyclists zooming past. Not to bad, but you could hear them. Next time I would ask for a room on the other side of the hotel.

Thanks, its this one, or the Ibis, other hotels are the ones that were formerly offices, that were made into hotels, or a bit far out of the Hobart CBD.
From your pics, its a modern built hotel, and the facilities look outstanding.
Nearest place for me to see snow capped "mountain" ie, Mt Wellington/Kunanyi without going to Queenstown, which is on my bucket list.
Waiting to see if Tassie opens its border by Jun 2021.
Qantas Premier Platinum Card: 100,000 Qantas Points, 75 bonus Status Credits and more!
The Qantas Premier Platinum Card delivers up to 100k Qantas Points, 75 bonus Status Credits, complimentary lounge invitations and travel insurance. All this with a reduced first-year annual fee of $199.
Recommended by the Australian Frequent Flyer
B

AustraliaPoochie said:
Thanks, its this one, or the Ibis, other hotels are the ones that were formerly offices, that were made into hotels, or a bit far out of the Hobart CBD.
From your pics, its a modern built hotel, and the facilities look outstanding.
Nearest place for me to see snow capped "mountain" ie, Mt Wellington/Kunanyi without going to Queenstown, which is on my bucket list.
Waiting to see if Tassie opens its border by Jun 2021.
Click to expand...

I'm booked to stay at this hotel in mid-December 2020 --- I'm probably thinking we have a 40% chance of going? I think you'll be pretty safe for mid next year.

AustraliaPoochie said:
Waiting to see if Tassie opens its border by Jun 2021.
Click to expand...

Bell21 said:
I'm booked to stay at this hotel in mid-December 2020 --- I'm probably thinking we have a 40% chance of going? I think you'll be pretty safe for mid next year.
Click to expand...

Tas will be opening its borders (as in no quarantine required on arrival) to SA, NT, WA and QLD and ACT on 26 October 2020. NSW to be decided next week (I'd say 50/50 chance right now). Vic might get a guernsey in December.

Tasmania is due to open its border to "low-risk jurisdictions" before the end of the month, but will not decide whether or not to accept travellers from NSW until next Monday, the Premier says.

JQ is not one of my favs, as to time of departure from ADL, so probably will have to transit via SYD dom airport, and pay for taxi from HBA to city and back.
((OT no public bus from Harvey Norman Cambridge Park near HBA airport to city centre, if there was I would use that, walking from the airport to Cambridge Park via walkway.
Looks like Skybus Hobart is not operating at the moment, but might be back by then)).
Have been to Hobart before, so know how cold it can be.
You must log in or register to reply here.
Share:
Facebook Twitter Reddit Pinterest Tumblr WhatsApp Email Link