Where to get the best scallop pies in Tassie

Heaven is a locally made curried scallop pie. (Scallop as in the shellfish, not the potato variety )

The original owners of Harbour Lights were pie-oneers of the scallop pie about 45 years ago.

The original recipe, using Tasmanian scallops and a mild curry sauce in crispy pastry, remains a feature of the cafe menu and a favourite for seafood lovers abroad. Termed the Yachtie Scallop Pie, the hearty dish is famed among sailors who dock in Hobart’s harbour. The cafe’s owner says the pie is a piece of history that will never leave the menu. Take away for $9 or eat in store with a large salad for $18.

Flavoursome local scallops fill the soft pastry casing of the scallop pies ($8.50) at Dunalley Bakery. They swim in a mild curry sauce, which does not overpower the natural seafood taste. Not all bakeries use Tasmanian scallops, and if there are no locally caught scallops, Dunalley Bakery will not have scallop pies for sale. The head baker’s pastry recipe has won him multiple awards.

You will find seven to eight fresh, local and seasonal scallops in the scallop pies at Blue Edge. The scallops are plump and sweet and the creamy curry sauce is made from an old favourite recipe and a dash of lemon complements the seafood. The pies are only ever made with fresh scallops sourced locally and are not currently available. But when they are, you had better get in quick to get a bite of one of the best scallop pies around.

Quality ingredients are key to the success of these award-winning scallop pies ($7.90). The creamy curry sauce complementing the seafood is made from quality, authentic spices from Spice House and the pastry margarine used is the best money can buy. The pie took out the Best Seafood category at the Tasmanian Bakers Show and has been a successful entrant in The Great Aussie Pie Competition.

These crispy and slightly smoky scallop pies ($8.95) are baked in a wood-fired oven. The casing — puff pastry on top and pie pastry on the bottom — holds 6-8 scallops depending on size. The seafood is immersed in a mild laksa curry sauce. Around 60 scallop pies are handmade at the Ross Bakery each day and that number increases regularly parallel to the pie’s popularity.

Dunalley. Is that the one on the way to/from Port Arthur? (just after/before you go over a small bridge).

Good pies, try a few flavours. A must stop for a break and nourishment.
Last edited: Mar 24, 2018

I found the Ross bakery ones underwhelming.As I am mainly in the North I like Tinnies in Launceston but the best I have had is the bakery in Sheffield.

Denali said:
Dunalley. Is that the one on the way to/from Port Arthur?
Click to expand...

I'd have to agree with you drron re Ross. Underwhelming. Scallops should have a mild curry with it, but that's all. And roe on, of course!

Sounds delicious. Something to investigate on the trip to Hobart.

Interesting to see scallop pies were featured in the Traveller section of the paper today in an artlucke on foods you must try in Tasmania. Bakery 31 in Ross was the one given as the place to try them.

Harbour lights source their pies from Smiths Pies in Cambridge. Just a short detour on the way to the airport. They can also be found at their van at the Salamanca market on a Saturday. Best I've had!

After this thread started I decided I should sacrifice myself for the benefit of all AFFers.So I am trying scallop pies when i can.
First I looked into the history of the scallop pie.Unfortunately there really is no definite evidence of it's origins but one thing is sure it wasn't first made 45 years ago.
Scallops were found in the Derwent river in the early 1800s.The next bit of evidence is the arrival on the scene of Joseph Keen.Yes the Keen of Keen's Curry powder.In the 1850s he was settled in Kingston just south of Hobart.He was the postmaster for the district,ran a General sore,a factory making condiments and sauces but also a bakery.
It is commonly said the best scallop pies must have fresh local scallops and Keen's Curry powder.So that suggests that the first curried scallop pies first made their appearance in the second half of the 1800s.In 1954 the Keen's condiments were sold to Reckitt and Colman which does make it alittle less likely they only appeared in the last 65 years.

So for the first instalment some of the pies I have tasted.First is the Tinnies of Launceston pie. 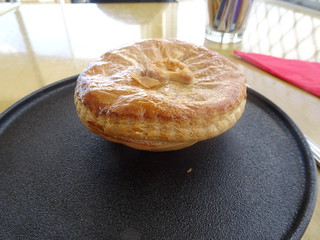 .
7 juicy scallops,lightly curried sauce that doesn't overpower the scallops.Pastry flaky but just a little thick.But the best of the lot so far.

The second is from Bakery 31 in Ross-not to be confused with the Ross Bakery.A Commercial operation with their pies sold in most states and can be ordered on line. 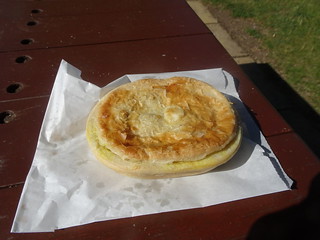 .
Pastry not as flaky as the Tinnies pie.A bit more curry flavour but not enough to overpower the scallops.6 juicy scallops.Number 2 on my list.

Next is from Barilla oysters near HBA. 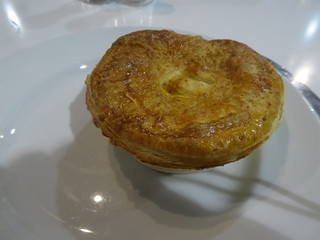 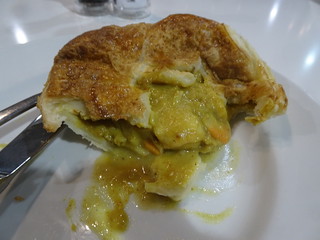 .
Pastry more stodgy,sauce not as creamy but 5 nice scallops.

Next the Ross Bakery. 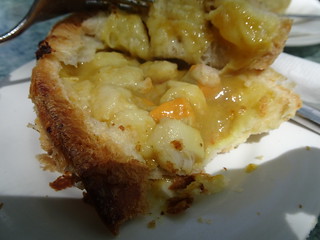 8 scallops.half juicy,half tough.I think a mixture of fresh and frozen scallops.The sauce certainly not classical-runny with little red bits in it.So spicy rather than mildly curried.I actually liked that sauce but with the probable use of frozen scallops and the slightly burnt pie crust I wouldn't recommend this one.

Last in this lot from the Country Bakery in Perth-no not PERfect PERth but the imperfect one just south of Lonnie. 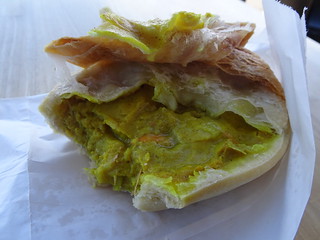 .
I think you may notice what is wrong with this one just looking at the picture.Sauce is too thick with way too much curry powder which definitely overpowered the 7 nice scallops.

Disclaimer.It is not scallop season in Tasmania so the scallops are not local.The better makers though use fresh Victorian scallops.Frozen scallops should not be used.

What are some good options on the NW Coast?

kermatu said:
What are some good options on the NW Coast?
Click to expand...

Sadly no rush on this info for me anymore as we're not going to get down to Tassie pre-Christmas as we'd planned.
Dan Murphy's: Buy Wine, Champagne, Beer & Spirits Online
Now with contactless delivery, shop online to get drinks delivered to your door or pick up in-store in 30 minutes. Lowest Liquor Price Guarantee. Biggest Range.

kermatu said:
Sadly no rush on this info for me anymore as we're not going to get down to Tassie pre-Christmas as we'd planned.
Click to expand...

kermatu said:
What are some good options on the NW Coast?
Click to expand...

Steady said:
I don’t really eat scallops that way but I hear Crusty’s in Wivenhoe and Ulverstone so a good scallop pie
Click to expand...

Yes, not really curry and can mask the scallops taste - but can be a handy snack. Thanks for the info.

Steady said:
I don’t really eat scallops that way but I hear Crusty’s in Wivenhoe and Ulverstone so a good scallop pie
Click to expand...

I was just going to say that last week I asked the RallySafe people in Ulverstone where to get a good pie and was told Crustys have the best scallop pies in Ulverstone, the one I had was pretty darn good and their coffee is ok as well!
Last edited: Dec 9, 2018

Hopefully we can try some out when we are in Tasmania in April. Any places recommended near Freycinet?

I won't be going over to the North west this trip but the bakery I went to in Burnie was Crustys.Didn't partake of the scallop pie however.
For scallops Fish On the Edge at Wivenhoe is very good with nice fish and chips as well.
Review here-
Rambling Around NW Tasmania.

drron said:
I won't be going over to the North west this trip but the bakery I went to in Burnie was Crustys.Didn't partake of the scallop pie however.
For scallops Fish On the Edge at Wivenhoe is very good with nice fish and chips as well.
Review here-
Rambling Around NW Tasmania.
Click to expand...

Steady said:
Fish on the edge and crusty’s are next door to each other in Wivenhoe so pretty easy to do a side by side comparison for anyone that way inclined
Click to expand...

Next time I'm down that way.