Varig in the news 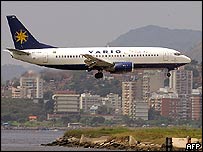 Varig's rivals failed to snap up its assets

An auction to sell off the assets of debt-ridden Brazilian airline Varig has ended with just one definite bid, from a group of the carrier's employees.

After a first round of bidding in which no-one offered the minimum price of $860m (£465m), the employees said they were prepared to pay just $449m. A Brazilian judge now has 24 hours to decide whether to approve the offer. The struggling flag-carrier's domestic and international assets, including 52 aircraft, are at stake.

Among potential bidders at the auction in Rio de Janeiro were rival Brazilian airlines Gol, TAM and Ocean Air, as well as a consortium led by Portugal's TAP. But none of them offered the minimum price set by the court overseeing the auction.

That led to a second round of bidding, at which the sole offer came from NV Participations, representing the TGV (Trabalhadores do Grupo Varig) employees' association. 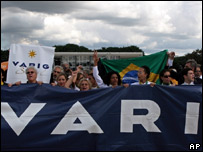 Staff at the airline have been fighting back

The auction comes as part of efforts to restructure Varig which are being overseen by Judge Luiz Roberto Ayoub. Judge Ayoub said on Monday that the new owner would not have to assume any of the airline's debt. However, many lawyers say the legal position is unclear following the adoption of a new bankruptcy law in Brazil in recent months.

Judge Ayoub is now responsible employees' bid should be approved or not. Varig has been under bankruptcy protection for a year, saddled with debts worth an estimated $3.5bn. It was the top airline in Brazil until 2004, but was then overtaken by TAM and later by Gol.

The airline has suffered financial problems for years because of rising costs and growing low-cost competition. It now has just 16.7% of the domestic market, but remains the leading Brazilian carrier internationally, with a 66.4% share. Last year it cut 13% of its 12,000-strong workforce in an effort to stave off bankruptcy. Since 1945, Varig has been majority-owned by the non-profit Ruben Berta Foundation.

A stranded Varig passenger waits at Congonhas airport in Sao Paulo, Brazil, on Thursday. Some people waited days to fly.

RIO DE JANEIRO, Brazil (AP) -- A bankruptcy judge on Friday canceled the planned sale of Brazil's flagship Varig airline to a workers' group, throwing the future of the carrier into limbo and virtually ensuring more travel chaos ahead for ticket holders in Brazil and abroad.

Judge Luiz Roberto Ayoub said the TGV workers' group, which made the sole bid for Varig at a June 8 bankruptcy auction, failed to make its $75 million first payment.

Ayoub confirmed that another company, VarigLog, on Friday offered $500 million -- slightly higher than TGV's $449 million bid -- and that he and bankruptcy administrators would examine the bid over the weekend to determine whether it seems viable.

VarigLog, the airline's former cargo unit, was bought earlier this year by Volo do Brasil, but that transaction must still be approved by authorities amid claims that Volo is controlled by foreign investors. Foreigners are allowed to own only 20 percent of Brazilian airlines. Volo says it is Brazilian-owned.

The judge said no decision will be made on the new offer until consultations with Varig's creditors take place, probably next week. And Ayoub indicated that another auction would probably have to be held to give other investors a chance at making bids.

The judge said he would not take steps to liquidate the company unless creditors ask him to do so. But the 79-year-old company -- once renowned for stellar service and a source of deep pride for Brazil -- already seemed on the verge of collapsing.

Passengers with canceled flights wait at a Varig counter at the Antonio Carlos Jobim airport in Rio de Janeiro, Brazil, on Wednesday.

Hundreds of Brazilians trying to return to Brazil from the World Cup in Germany were stuck in Frankfurt, and other airlines didn't have space to take them, Brazil's Agencia Estado news wire service said.

Other passengers in Europe and Brazil were managing to get on flights to go where they want to go, but delays were lasting anywhere from hours to days as the heavy summer holiday goes into high gear.

The government estimated a day earlier that 28,000 people are abroad with Varig tickets between this week and June 30.

On Friday, the Brazilian air force put five planes at the government's disposal should it need to rescue stranded passengers. Two of them are aging Boeing 707s that would be used to bring Brazilians back from Europe, and the other three are much smaller planes that could be used in South America.

Other domestic and international airlines were gearing up to take over Varig's routes if the company is broken up, but some were refusing to honor the airlines tickets despite pleas by Brazil's government.

Varig said it managed Friday to restore a flight to New York City that had been suspended, and insisted that only 11 of nearly 200 foreign airlines were refusing to honor the carrier's tickets.

But complicating matters further, Brazilian airport authorities said that Varig would be required starting July 1 to pay airport fees in cash prior to each flight. Much of the company's $3.5 billion debt is to Brazil's government, workers and pension funds.

Varig has been under protection from its creditors since June 2005, when it became one of the first companies to use a new Brazilian bankruptcy law similar to U.S. Chapter 11 proceedings.

Varig is Brazil's largest international carrier, but its domestic penetration slumped in recent years as its financial problems worsened.
Book with Virgin Australia - Fly with Virgin Australia
We've Increased Our Flying to 30 Destinations Across Australia. Book With Us Today. Change Your Flight, Fee-Free and As Often As You Like for Travel up to 30 Apr 22*. Contactless Check-in. Special Safety Protocols. New Cleaning Practices. Online Check-in.