cove said:
Just read that about 45% of Americans think that it would take a miracle to retire and live comfortably. With the inflation outbreak the numbers are jumping dramatically.
Click to expand...

As a retired person, I'd like to see inflation take off here.

Might seem strange to some, but there you are... 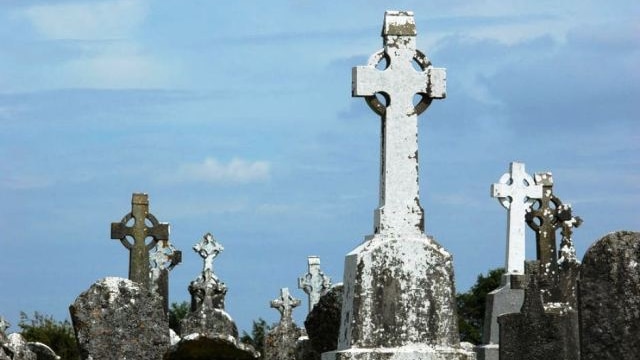 It's not called a 'death tax', but millions of Australians' retirement savings may be taxable upon death, writes Nassim Khadem.

Withdrawing your super and paying tax

Information for individuals about withdrawing and paying tax on their superannuation.

@clifford at our business we sell products that can have steel ,stainless steel, brass , pvc and various types of plastic. As a wholesaler and a manufacturer in Australia I can tell you inflation is coming pretty quickly. Inflation in food will really hurt the most vulnerable and the cost of fertiliser has rocketed.

Inflation as a desirable social gift is a fallacious concept , IMO.. others mileage clearly varies .
Rampant inflation is nothing new for many of us , but for every gainer there are many more losers.

clifford said:
As a retired person, I'd like to see inflation take off here.

fund earnings would then likely reflect this and grow but that’s a difficult proposition as often it’s factored into the share capital gain and if shares aren’t sold can’t be realised not the dividend value vs CPI adjustments on age pensions and defined benefit pension streams, potentially deeming rates
either way the lag time is at least 6 months for the above let alone the baked in wage rises in existing EAs which could push this cost onto consumers well before the next EA is signed

Lucky those on super pensions have usually dispensed with costs of housing, children and cars....

Inflation on (relatively) small retirement costs Vs increased interest on fixed rate savings. I think some forget the situation of many self funded retirees.

RooFlyer said:
Inflation on (relatively) small retirement costs Vs increased interest on fixed rate savings. I think some forget the situation of many self funded retirees.

Agree. Many people feel they don't have the slack in their anticipated budgets to risk equities-though, unless unlucky, they would end up much better off if they could

My comments were a tad catholic, personally it will be nice to see the pesky fiducary cash component actually earn something.
Passes my mind that in many areas we already have rampant inflation and the system simply hasn't caught up yet.

I have no-so-fond memories of when inflation was described as just a load of hoo-ha .
B

What's that? My smsf sometimes has <1% cash.

My smsf sometimes has <1% cash.

tut tut..naughty.. watch out for the fuzz….
B

tut tut..naughty.. watch out for the fuzz….
Click to expand...

Yes I got a please explain which I did, but I don't think that it is NOT ALLOWED to have negligible cash?
R

Anyone use Sharesight or similar to track portfolio CGT etc
C

Yes our accountant uses Sharesight. I look at it a couple of times a month.
With a couple of family accounts we just do it all with Commsec so that keep those couple easy to track.

superannuation funds kicked in a whopping extra amount given 18-20% earnings in 2020-21
those $1.7 transfer balance caps must be groaning Under the 15% tax rate haha ....

And in that time the population has only grown by 30%

CaptJCool said:
The age pension figures dropped yesterday for September 2021.
down nearly 18,000..... hypothesising those 2021 20% returns plus housing valuations had an impact.
the assets test data suggests so
Click to expand...

the age pension figures dropped again today and dropped in the December 2021 quarter ... 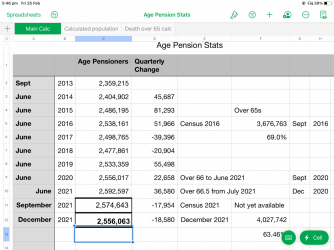 so to place into CONTEXT

However, the ABS death stats tell us how many died (down to a 5 year split) so we need remove nearly 670,000 for that reason PLUS we need remove the 21.6% not yet reached 66.5 years of age (about 280,000) (recognising some already died and that this is a back of the envelope calculation)


This then leaves about 4 million of which 2.556 million are on age pensions. In effect the entire population increase in the last 5 years of around 350,000 has made no difference to the total age pension figure as departures by death or income or assets test are replaced by a new entrant.

As this is an hypothesis, it can be detailed further once Census 2021 figures are released

PS I DID realise after posting that part of the reduction is because in effect, the scheme is “closed to new entrants” because of the age adjustment on 1 July 2021 that extends the waiting period for an additional 6 months
Last edited: Feb 26, 2022

Apropos of nothing, my Super balance climbed by 25% last financial year. A much bigger increase than usual. Long may it continue*.

GarrettM said:
Apropos of nothing, my Super balance climbed by 25% last financial year. A much bigger increase than usual. Long may it continue*.