Power outage at T1 Melbourne so baggage services not working. Quite a mayhem at the moment

Likely no movement in Adelaide for a while too. Fog Very widespread. 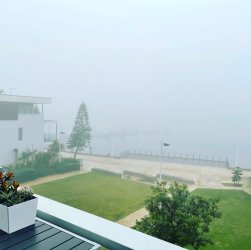 Pushka said:
Likely no movement in Adelaide for a while too. Fog Very widespread.

QF2 (B789 VH-ZNI) ex LHR on Tuesday 2 November 2021 was in the first week of the official resumption of QFi's 'normal passenger' flights back to Australia, although at this stage some prospective users such as foreign tourists cannot travel.

This 0950 hours midmorning nicely timed flight was airborne at 1004, if anything a little early, but presumably due to adverse winds lost time enroute, arriving DRW at 1244 on Wednesday 3 November, 59 minutes tardy. Takeoff for SYD was at 1440 versus the timetabled 1315 gate pushback, so SYD arrival was at 2005 hours, exactly an hour late.

I'm guessing southbound patronage may be fairly low given that 50 per cent of the 'market' - Brits and others visiting Oz - can't do so for a while. However the belly may well be full of freight given the unmet demand with so few passenger aircraft operating to and from Oz compared with two years ago.
M

FR24 is a popular, useful site beloved by many.

However tonight if one inputs 'QF11' as a Google search, the site reveals B789 VH-ZNB as the operating aircraft on this evening's journey, taking off from SYD at 2213 AEDT but anticipated LAX arrival is supposedly delayed until '1947' (which adding the five minute median allowance for getting to the gate - yes it takes longer at some airports) gives 1952 PDT.

Wednesday 3 November 2021 saw B789 VH-ZND deployed on flagship QF1, taking off from SYD at least five minutes early at 1840 and arriving at the DRW gate at 2110, 15 minute sahead of the timetable. However departure was then delayed, with the flight airborne at 0009 on Thursday 4, 74 minutes after the scheduled 2255 hours 3 November pushback. Arrival at LHR was at 0821, 91 minutes tardy on 4 November.

This was the first real test of reduced time in LHR given that southeast bound QF2's new timetable calls for a midmorning nicely timed 0950 BST departure. Takeoff was at 1043, with arrival in DRW today (Friday 5) at 1219, 34 minutes late. The aircraft then formed the second leg, the 1315 hours early afternoon DRW - SYD, taking off at 1408 for arrival tonight at 1943, 38 minutes behind schedule.
M

Just when cancellations are notified by airlines to airport websites, and when the latter actually 'act' on these by marking a flight as 'cancelled' or alternatively removing it from the publicly viewable flight lists is a moot point, but the Sydney Airport site suggests that QFd has cancelled an astounding 68 flights from Sydney on Saturday 6 November 2021, with only (at most) 21 flights remaining that are likely to operate.

There are only six Qantas flights to run from Sydney down to Melbourne. On a quiet Saturday there'd normally be well in excess of 15, and yet today is Stakes Day in the Melbourne Spring Carnival for the many who enjoy horse racing. (I haven't checked but attendance numbers are probably limited as they were for the Melbourne Cup).
M

Tonight, Sunday 7 November, it's similar with departure not suggested until 2005 hours.

It won't surprise that this flight is the sole QAN offering today on this 'hermit' route.

On the plus side, the number of delays is massively reduced.
The Whisky Club
Possibly the best subscription service on the planet, designed specially by whisky lovers for whisky lovers. Join the club to grow your collection and drink great whisky.

jb747 said:
On the plus side, the number of delays is massively reduced.
Click to expand...

Since reintroduction, QF2 has largely run on time or close to it.

It isn't operating daily (though to be fair, November has usually been one of the three 'low travel' months in and out of Oz: too early for Christmas holidays). 'The virus' is a whole new ball game with a limited number of individuals (us!) able to travel, but some others prohibited from boarding (them!)

Today (23 Nov), VH-ZNK arrived in LHR 15 minutes early at 0635 as QF1. FR24 asserts that QF2 today is to depart LHR at 2220 hours, 810 minutes later than the normal 0950 hours. I couldn't verify this through the Heathrow Airport site (didn't seem to work properly), but the QF site indicates that QF2 should depart 180 minutes late at 1250 hours from London Heathrow.

If FR24 is correct, it may reflect the crew having appeared at LHR for the tour of duty but then being required to rest back in an hotel when the delay intensified. I'm sure jb747 will be able to inform us more re whether that's a possibility.

I've not undertaken daily monitoring of this recently reintroduced flight but today's may be its first serious delay. (The one highlighted a few posts above was far less).

Melburnian1 said:
Today (23 Nov), VH-ZNK arrived in LHR 15 minutes early at 0635 as QF1. FR24 asserts that QF2 today is to depart LHR at 2220 hours, 810 minutes later than the normal 0950 hours. I couldn't verify this through the Heathrow Airport site (didn't seem to work properly), but the QF site indicates that QF2 should depart 180 minutes late at 1250 hours from London Heathrow.
Click to expand...

On Tuesday 23, QF2 took off from LHR at 1319 with Wednesday 24 November DRW arrival altered to an expected 1448, 183 minutes behind schedule. While not displaying on FR24, I assume this will mean SYD arrival at 2150 AEDT or later.
M

As I write it is 1612 in Darwin but the plane doesn't appear to have taken off. It may shortly.

QFi apparently sells DRW - LAX tickets connecting from 'the 2' (as one of AFF's renowned aviators - NB. not a 'former aviator' - delightfully refers to it) to 'the 11' so FR24 is suggesting tonights QF11 will depart SYD at 2225 AEDT. If there are connecting passenger(s) and booked luggage, that may be a little optimistic.
M

Continuing with Wednesday 24 November, QF1432 (the 1040 hours nicely timed midmorning CBR up the short hop to SYD) did not become airborne until 1351 hours. Arrival for Q300 VH_SBJ was at 1437 mid afternoon, 182 minutes late. This aircraft earlier went to DBO and back so may have been delayed by fog or other weather problems on that run.

Many travellers on this route have fares paid by government departments but it must still be irritating that there's so much late running, which unfortunately QAN and REX can't do much about. No wonder so many travel by car, rail or road coach on this short journey.

QF2116 (1510 hours SYD up to CFS) has VH-LQB, taking off at 1541 but then only travelling as far north as Singleton before starting a diversion that saw it land back in SYD. There have been storms approaching SYD from the northwest but I don't know if it was that, a problem with the aircraft, someone with a medical problem on board or some other occurrence.
Last edited: Nov 24, 2021
M

The delayed QF2 departed DRW at 1628 local time, taking off at 1645 after a slight delay occasioned by an arriving (of all aircraft) Cessna. SYD arrival should be at about 2210 late this evening, 185 minutes tardy.
M

Melburnian1 said:
QF2116 (1510 hours SYD up to CFS) has VH-LQB, taking off at 1541 but then only travelling as far north as Singleton before starting a diversion that saw it land back in SYD. There have been storms approaching SYD from the northwest but I don't know if it was that, a problem with the aircraft, someone with a medical problem on board or some other occurrence.
Click to expand...

sydneyboi said:
My NZ flights for end of Jan just got pulled/cancelled
Click to expand...

Well with NZ determined to continue to pursue COVID-zero for a while yet and to block Australians from visiting till at least the end of April 2022 that's hardly a surprise.
M

On Friday 26 November 2021, B789 VH-ZND enjoyed an uneventful trip from SYD up to DRW, taking off at 1837 (early - as departure is timetabled for 1830) and arriving at 2117, eight minutes ahead of time. However its continuation at a scheduled 2255 turned into a midnight takeoff from the Northern Territory's capital, so estimated LHR arrival is at 0750 GMT on Saturday 27, an hour late.

Yesterday (26 November) the inbound QF1 to LHR arrived at the gate earlier, at 0721 (31 minutes behind) with VH-ZNG but had no trouble departing on time at 0950 as QF2, as it was airborne at 1009 hours. Today's stay in London is two hours that in theory should also be achievable for an on time pushback.