Old and New England with Scotland.The cripples on tour.

Tomorrow we start our next trip.This was deliberately planned as a simple Fly/drive holiday as I was booked yet again to have a knee replacement in January.It was 4th time lucky and the deed was done.Fortunately despite an early setback when I overdid things the recovery was very quick.Turned out just as well as 25 days after my op mrsdrron went and fell in the garden outside our front fence.2 plates and 12 screws later her ankle was fixed.
However now I had to look after myself and when after 3 weeks she came home I was the chief cook and bottle washer.Coped well if I say so myself though according to mrsdrron I don't do things the right way.To counter this when she could look after herself I went and spent 2 weeks in Townsville working.

This is the 14th hospital I have worked in since retiring and it was the most organised so I really enjoyed my time there.It was very busy so not much time to get out and about.I decided to test myself out by walking up Castle hill-from about half way not from the bottom.The knee handled it well.So to start as I often do some Australian pictures from Townsville to start.So from Castle Hill- 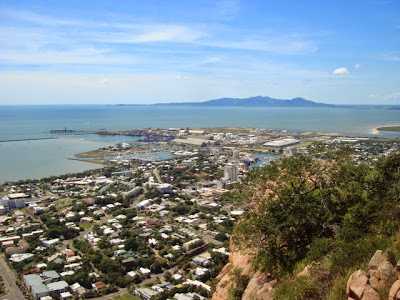 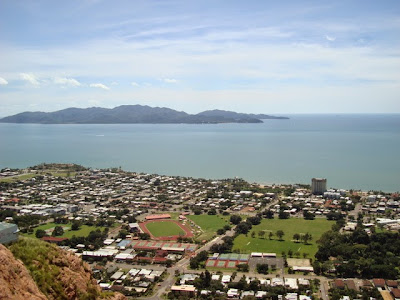 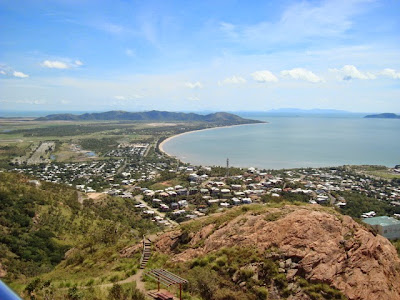 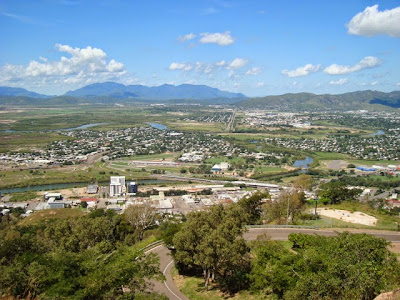 And in the distance the hospital and JCU. 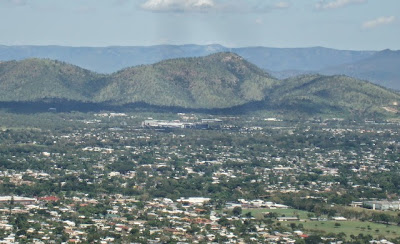 And the airport with a QF flight leaving- 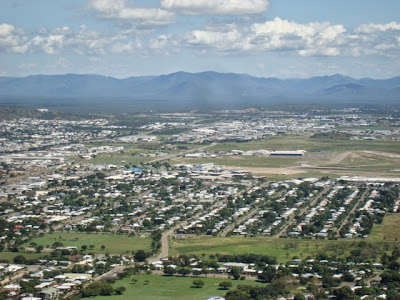 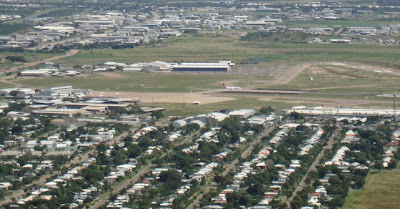 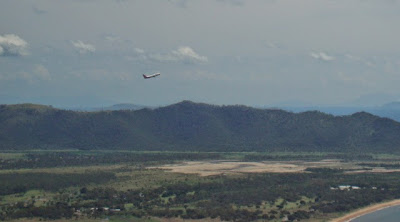 Only took my old camera so no close ups.As some may remember I arrived a day late after running foul of ITA.(not fowl for the Grammar activists we now have).However planes were not the only form of transport that was affected.The train line was washed out both to the north and south.A week later when this photo was taken the Sunlander was still waiting to go south.It was able to resume its journey later that day.

Next a little more of Beautiful Townsville before the trip proper starts.

Looking forward to this one - I haven't been following too many TR's lately. Take care mrs.dr.ron and drron

Looking forward to reading of your travels. Hope you and mrsdrron have a fantastic trip.

Wishing drron & mrsdrron a great trip!
I thoroughly enjoyed reading your previous trip review's , particularly South Africa & Canada .... without question this one will be another Cracker!
Last edited: May 6, 2014

The other place I went was the Botanic Gardens.Lots of mosquitoes and as we had diagnosed 3 cases of new Dengue fever I wondered if I should leave before seeing everything.Didn't help when the first path I took led through a large flying fox colony so was it Dengue or Hendra virus I was going to take back to the Sunny Coast.Fortunately neither.
The gardens serve as a memorial to the Blackhawk disaster of 1996. 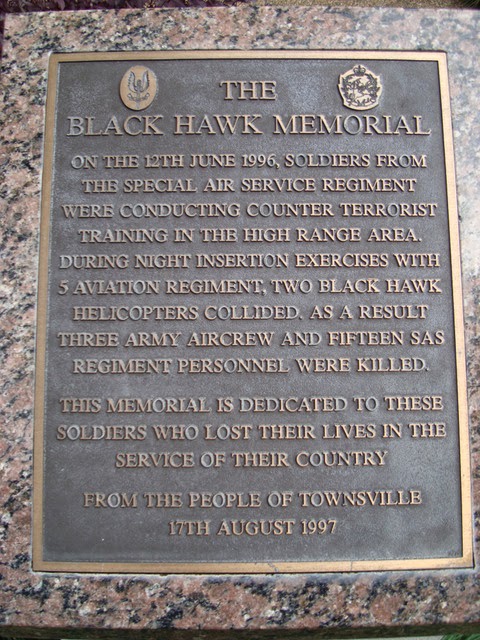 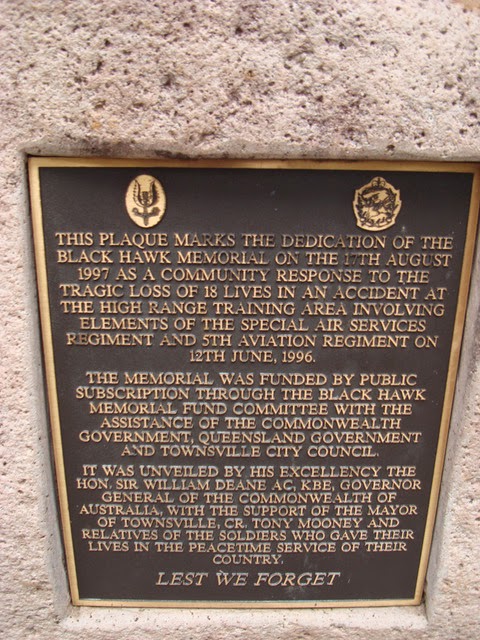 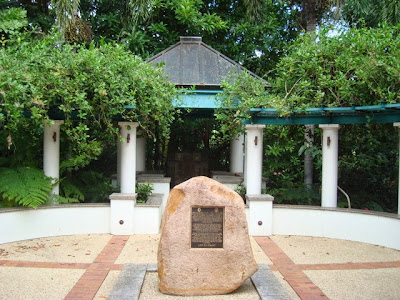 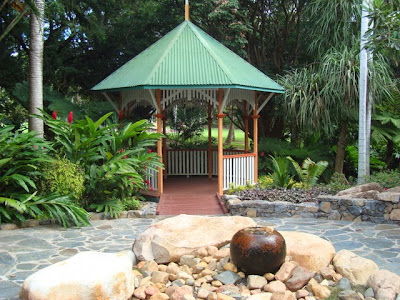 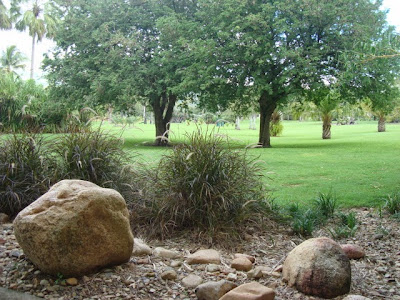 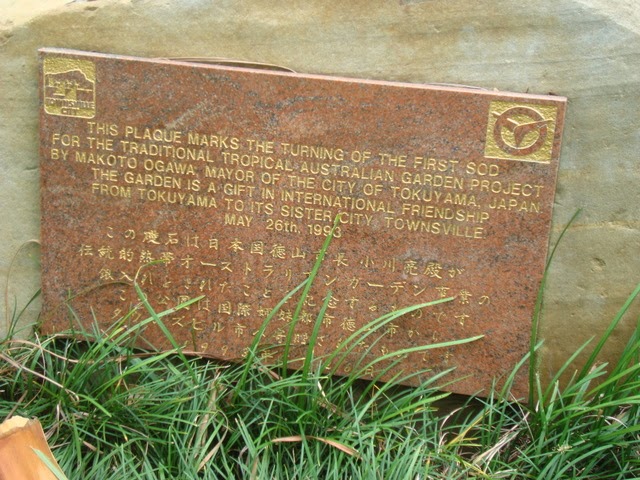 A creek runs through part of the gardens,trees give structure and paths are highlighted with impressions of branches,leaves and fronds- 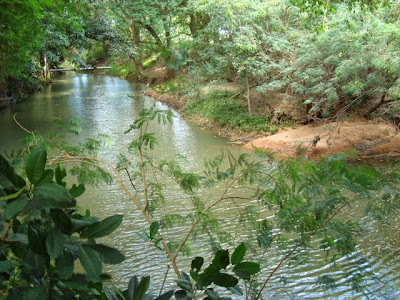 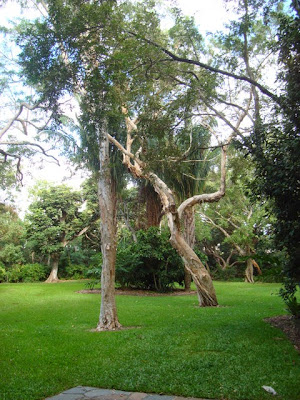 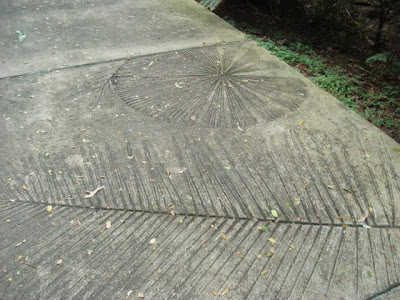 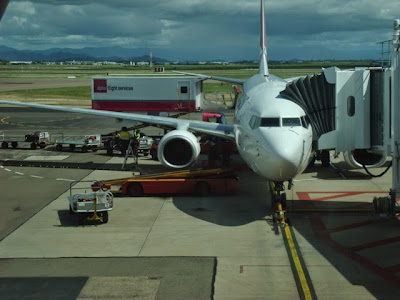 Cool Cat Phil said:
Wishing drron & mrsron a great trip!
I thoroughly enjoyed reading your previous trip review's , particularly South Africa & Canada .... without question this one will be another Cracker!
Click to expand...

drron said:
Tomorrow we start our next trip.This was deliberately planned as a simple Fly/drive holiday.
Click to expand...

Clearly no need for a Google Maps is there mrs.dr.ron! Have fun kids.

Cool Cat Phil said:
Wishing drron & mrsdrron a great trip!
I thoroughly enjoyed reading your previous trip review's , particularly South Africa & Canada .... without question this one will be another Cracker!
Click to expand...

Subscribed and looking forward to it

So tomorrow we start our adventure.QF533 BNE-SYD.
However our first week is on Grandparent duty whilst our son and his wife are off to Philly for a 10 year reunion.As I will be the only one able to go up and down stairs I will be on bathing and dressing duty.It will be full on from 0630 to 1930.I don't expect any time to do any updates until we are resident in the Rydges at the airport on the night of the 14th.

So on the 15th it will be JAL772.Now despite the halving of SCs for OW partners this will remain our favourite way of getting to Japan.When you get older a day time flight is just so much better than an overnighter.Then a night in the Hilton NRT.This is a points stay from mrsdrron's account and as she is now silver no perks for us though I will try flashing my gold card-if you never ask you will never know.

Next an F milesAAver award NRT-DFW-LGA.I love the taxes-$US2.49 each.First up for me is a conference at the Hilton on 6th.We will be staying on the club floors which make it very bearable.After the conference it is a week driving around New England-from outlet to outlet with a few Maine lobsters thrown in.

At the end of May another F milesAAver award JFK-MIA-LHR.We initially booked on a direct flight but it got cancelled hence the indirect route.Not something you like when no earning advantage from it.Pick up the rental and driving north spending most of the time in Scotland before yet another F Award ABZ-LHR-NRT.We then pick up our Circle Pacific flights and off to BKK for a week of resting and eating before returning home BKK-KUL-BNE on MH.Again coming home on a daylight flight and hopefully as this ticket was booked and ticketed prior to March we will get the old SCs so mrsdrron requalifies WP.If not she will be 50 SCs short.

So in just over a week the posts will continue.

Princess Fiona said:
Subscribed and looking forward to it
Click to expand...

And we will be staying near Kelvin Grove-My grandfathers house had that name as my grandmothers family were from there.

I'll be going to Scotland for a week in September so I'm really looking forward to your latest trip report drron.

Aaah, just realised from the next two posts that it's Scotland - so that's how Kelvin Grove got its name.
Last edited: May 7, 2014

The West End is really one of the nicest parts of Glasgow.
Beautiful sandstone buildings, parks, galleries, cafés and the University.
Make sure you take a visit to The University Cafe

I must send your photo PF to my daughter. After graduating from Uni in Sydney she lived at Kelvin Grove for 18 months and worked at The University of Glasgow. I wonder if she went to that cafe?

Well our week on grandparent duty is over.Gone hopefully the nights of collapsing into bed at 2030 absolutely exhausted are over.Utter chaos at times but intermixed with some magic moments which will come later.
But first our first flight.For the first time our limo transport was 30 minutes late-but due to a mechanical problem and mrsdrron has always built in a lot of spare time for just this scenario.We arrived at BNE still 2 hours prior to our flight.Very impressed with the QF service for mrsdrron.As soon as she entered the terminal a staffer came over and directed us to the assistance desk.Took very little time to check in and we were offered an earlier flight but declined.Made our own way to the lounge but booked a wheelchair to the gate for mrsdrron.
Both of us took a little while through security as each of us set off the alarms.But unlike my trip to Townsville the security guy was organised and pleasant.Asked me to wait so he didn't have to close the line down whilst he wanded mrsdrron.He was also the fellow doing the secondary explosives testing so we got a reprieve from that.

As usual mrsdrron guested me into the J lounge.A nondescript chicken,olive and parmesan hot dish but a nice Victorian Pinot Grigio.
QF533. BNE-SYD. ETD-1425. PB-1439. TO-1444. Seats 2A,C.
ETA-1600. Landed-1553. At gate-1605.
Uneventful flight.Snack was either a chopped chicken salad with ranch dressing,a cannellini bean soup with parmesan or a cheese plate.Mrsd had the chicken,I the soup. 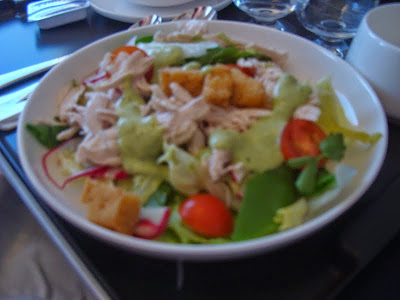 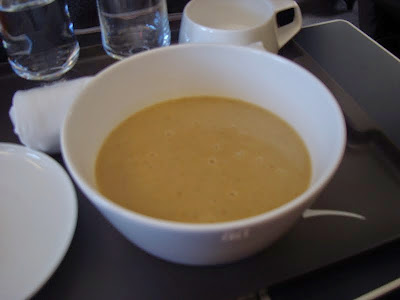 For the first time in a long time mrsd was the last off.Again the QF staffer was excellent.Arrived at the baggage carousel just as our bags were disappearing.They were probably first off this time.
The staffer collected our bags and helped with the bags to the taxi as mrsdrron walked that short distance.
A taxi driver that actually knew where we were going topped off an easier day than we contemplated with mrsd's mobility problems.
But now our world changed.

We did get some good views of the harbour on our approach. 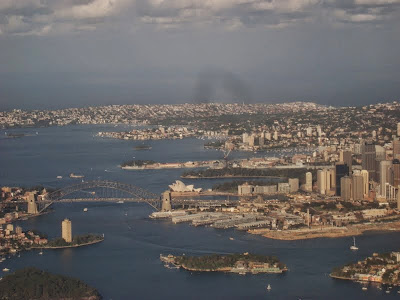 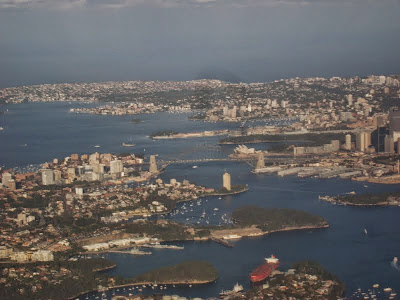 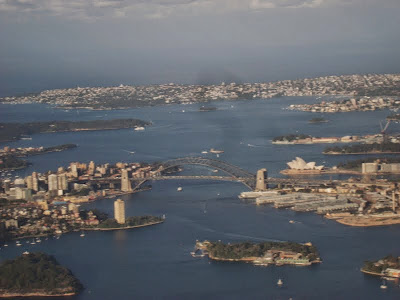 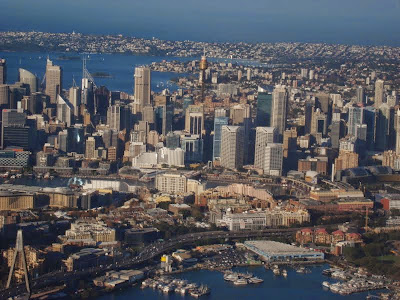 We did have some brushes with people in the news.At the SYD QF terminal I thought I saw Lehmo but may have been wrong.In Paddington on Thursday it was Nick Greiner and on Monday Clover Moore. 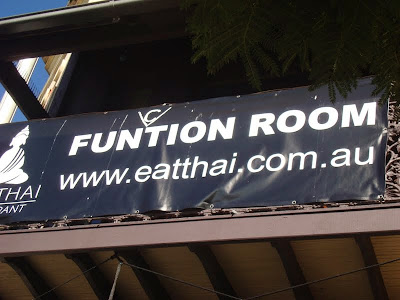 
Although it is very hard work looking after 3 grandkids the oldest being 6 there are some very precious moments.For example on Sunday morning I would have loved to have gone down to the harbour and watched the seaplane fly past celebrating 100 years since the first seaplane flight into Sydney Harbour.However I had to take my 2 eldest grandchildren to their first footie training.Bad enough it was AFL but to rub salt into the wound it was run by one of the Sydney Swans!
Was very enjoyable though.My 6 year old granddaughter turned out to be quite good.By the end of the hour she could kick the ball on the full to her brother every time.Also showed remarkable position sense in some of the exercises.
However my award to the child with the most chutzpah was the little fellow in a Waratahs jersey.

On Tuesday we had a few hours child free so went first to Centennial Park.What a great jewel for Sydney.Watched the police exercising their horses.Then to Westfield Bondi Junction for mrsdrron's first retail therapy in over 3 months.A good upmarket food court there and we had some very good seafood from De Costis.

Great, another Drron TR to enjoy. Travel safely, enjoy the food and wine, and may the shopping gods be with mrs.drron.