The aircraft was then rostered on JQ205 (1330 hours late lunchtime 'travel bubble' SYD - AKL which meant it had to get across to the international terminal. Takeoff was at 1424 with expected arrival at 1913, 38 behind.

Fog in Sydney (and perhaps smoke haze from autumn burn offs?) is causing many delays into SYD on Monday 3 May's morning, which as usual will compound and take a while to recover from unless planes have significant timetabled gaps between flights later today.

The 0620 hours from ADL across to SYD, JQ761 (A320 VH-VFJ) had a timetly liftoff at 0633 but has had to hold in the usual places above Gunning and then northeast of Goulburn, NSW so estimated arrival has become 0932, 47 minutes tardy.
M

Due to the panicky NZ Government's reaction to the Sydney 'two cases', JQ205 (1550 hours SYD - AKL) is cancelled for the second consecutive day.
JQ972 from MEL to PER is also not operating.
M

Flights between Sydney and NZ are also all cancelled on Sunday 9 May as the 'travel bubble' doesn't recommence until midnight on Sunday evening/Monday morning. So this means JQ205 (1330 hours SYD - AKL) again won't run.
M

JQ505 (0700 hours SYD - MEL) did not operate, and nor will JQ511 at 1045 hours, JQ515 (1230 hours), JQ519 at 1630, JQ523 at 1730 or JQ531 at 1755 hours on the same route and in the same direction. I'm guessing low bookings are to blame, which makes sense given how QFd and ZL are also experiencing lower than hoped for load factors, and VAd (like the other two longer established entrants than ZL) have also reduced frequencies on this major sector compared with three or four years ago.

Reflecting the pariah status of Victorians (with three of the four lockdowns having been the Victorian Government's fault), on Sunday 30 May 2021, from SYD to MEL, JQd is cancelling four scheduled flights and only operating three.

This is a very sparse offering from JQd on what is normally Australia's busiest intercapital air route.

Flightaware has JQ978, the evening CNS-PER service, diverting to ADL, with the course change occurring just after crossing the WA border - reason unknown. It will break curfew landing in ADL, although using Runway 05 the approach will be over the gulf rather than the suburbs, however pax probably unable to continue to PER until sometime Monday.
Last edited: Jun 7, 2021
S

Along with media reports of multiple JQ services ex SYD and MEL being cancelled today due to crew being identified as COVID-19 close contacts, both JQ769 ADL-SYD and JQ763 ADL-DRW have been cancelled this evening - likely for the same reason
As there are QF flights to both destinations departing shortly prior, hopefully the majority of affected pax have beeen rebooked accordingly. 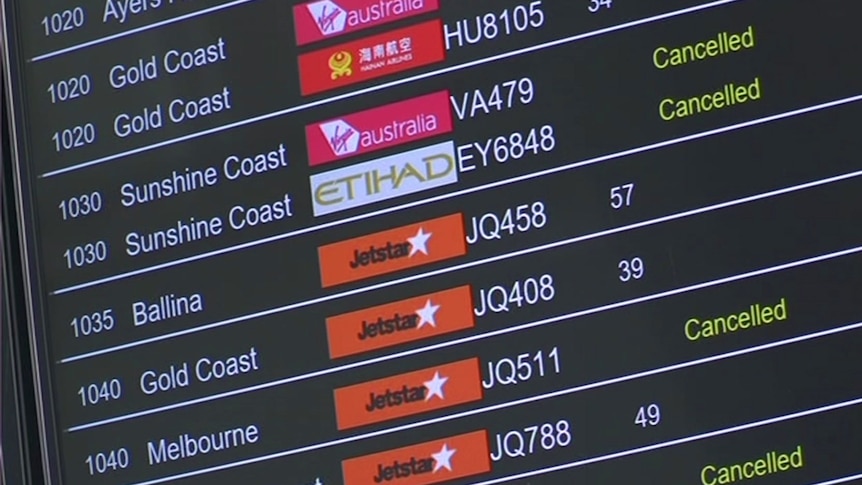 At least 80 flights are cancelled at Sydney Airport on Christmas Eve as COVID-19 requirements put a strain on airline staff.

So far, it is better on Christmas Day, at least out of SYD, with five cancellations displaying and 51 remaining flights operating. As always there may be more flights that get the chop during the day.
M

FJ and QFi flights to NAN today are also delayed or cancelled.