"A small cruise ship operated by French line Ponant has been evacuated after an engine room fire.
The 264-passenger Le Boreal was sailing off the Falkland Islands early Wednesday when the fire broke out, according to a Ponant statement sent to USA TODAY.
There were no injuries to passengers or crew from the fire, which was "of a technical nature" and has been extinguished, the line says.
Ponant says Le Boreal's passengers were transferred to sister ship L’Austral, which also was in the region, and are being taken to Port Stanley in the Falkland Islands to be repatriated to their homes. The remainder of the Le Boreal sailing has been cancelled."


-- An engine fire on Le Boreal, a luxury cruise yacht owned by Ponant, caused hundreds of passengers to be evacuated early Wednesday morning while the vessel was traveling on an Antarctica cruise.
According to British broadcaster ITV, the 264-passenger ship issued a distress call just after 2 a.m. while it was near Cape Dolphin, north of the Falkland Islands. The news agency reported that 90 of the ship's 347 passengers and crew were air lifted to safety from life rafts, while the rest were transferred to another ship.
The Falkland Island Government Emergency Services responded to the fire, in collaboration with local vessel agents and British Forces South Atlantic Islands Emergency Services, the MercoPress reported. HMS Clyde changed course in order to help the evacuation.
No one was injured in the incident. An investigation into the fire has been launched, ITV reported.
The ship had just started a 15-night round trip Antarctica sailing from Ushuaia, Argentina, on November 15. The cruise was supposed to visit South Georgia before landing on the continent's peninsula and visiting Deception Island. The remainder of the cruise has been canceled. Cruise Critic has reached out to the French line for details of how passengers will be reimbursed.
The line issued the following statement to ITV: "As a precaution, all passengers were evacuated from the ship. They will re-embark on L'Austral, who belongs to the Ponant fleet, situated nearby, before being repatriated quickly." 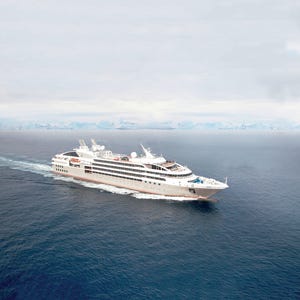 I will be very interested in the level of compensation offered by Ponant. For most passengers it was the trip of a lifetime and some may be unable to do it again.

Major said:
I will be very interested in the level of compensation offered by Ponant. For most passengers it was the trip of a lifetime and some may be unable to do it again.
Click to expand...

Such things seem to be disregarded by the larger companies.

Thursday update: The ship is now anchored with officers aboard, two tugboats helped secure the vessel and provided firefighting services.
British forces based in the Falkland Islands responded to a distress call by the 10,000-ton cruise ship Le Boreal from Ponant Cruises on November 18, according to a statement.
The ship reported suffering a major engine room fire, which caused the loss of all power and left the ship drifting.
View video here.
A north-westerly gale placed the ship in real danger of grounding on Cape Dolphin, East Falkland.
The captain ordered the ship, with 347 passengers and crew, to be abandoned early yesterday morning.
According to one source familiar with the operation, passengers were in lifeboats for up to seven hours. Additionally, he said that the company tries to keep its ships close to each other in remote areas, with the sister-ship, the Austral, also taking some passengers.
Working closely with the Falkland Islands Government, British Forces enacted a major search and rescue plan.
Two Royal Air Force Sea King Search and Rescue helicopters were scrambled, along with two other support helicopters, a C130 Hercules and a Voyager aircraft for command and control. The Royal Navy patrol vessel HMS Clyde was despatched to the scene, as were Dutch tugs which support British Forces in the Falkland Islands.

In an operation coordinated from Mount Pleasant, Royal Air Force Search and Rescue helicopters, supported by British International and Bristows helicopters, successfully winched 79 people from the deck of the Le Boreal and from two life rafts in the water.
All of these evacuees were brought to the British Forces Base at Mount Pleasant where they received care, clothing, food and medical attention. HMS Clyde assisted two further lifeboats with over 200 evacuees on board, ensuring they were brought to safety.
All passengers and crew from Le Boreal have been accounted for and are being looked after on the Falkland Islands. The vessel itself is now in a stable condition and two Dutch Tugs, under contract to British Forces, are now assisting to bring the vessel alongside in the Falkland Islands for a detailed assessment of her condition.
Defence Secretary Michael Fallon said: "This successful rescue in the Falklands this morning demonstrates how our Armed Forces are always ready to help those in peril. The swift action taken by Royal Navy and Royal Air Force crews, working with civilian counterparts, saved many lives and prevented this developing into a human tragedy."
Commander British Forces South Atlantic Islands, Cdre Darren Bone, said:
"We responded with everything we had yesterday to assist in what was an extremely complex and hazardous rescue operation in difficult conditions but I am delighted that we can report all of the passengers and crew of the vessel are safe and well and the vessel itself in a stable condition. This was a huge team effort involving close liaison with the Falkland Islands Government and I am enormously impressed with the reaction by all the British forces involved, it was an exemplary performance all round."


The video is interesting to watch if you cruise a lot ! Something I NEVER want to experience !