Mr Stoddart's OzJet will start flying between Sydney and Melbourne on Tuesday, with 16 flights daily Monday to Friday with limited weekend services.

OzJet last week announced a $200 one-way fare between the two cities until December 4. Its normal fully-flexible fare will be $325 one-way and $650 return.

The Melbourne-born businessman, who for 15 years has lived in the UK where he operates European Aviation, said OzJet passengers would be allowed three pieces of hand luggage, up to a total of 20kg.

"For many business people on a short trip - just one day or overnight - that allowance will be plenty and mean that they don't need to waste time checking in at the departures counter, they can go straight to the gate," Mr Stoddart said.

The extra luggage room has been created because Ozjet's Boeing 737s will carry only 60 passengers in the new configuration instead of the usual 100.

"We now want the traveller to see for him or herself our unique product offering business class at an affordable, economy price," Mr van Pelt said.

He said the six-day introductory offer will give people the chance to try OzJet in the first week of flying.

"We are not intending to start a price war in the Australian aviation industry," Mr van Pelt said.

"We have always said there would be no winners from that, but we want to give travellers the best chance to trial an exciting new domestic flight option in the market."

OzJet will have check-in counters at Terminal 2 in Sydney and Terminal 3 in Melbourne.

In Sydney, it will use primarily Gate 39 in Terminal 2 but also gates 38 and 40, while in Melbourne, where it is based, it will use Gate 12 exclusively in its initial phase.

OzJet intends to extend its services in 2006 to include Brisbane, Adelaide, Canberra and Perth as it increases its Boeing 737 fleet from three to ten.
© 2005 AAP 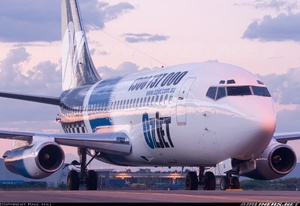 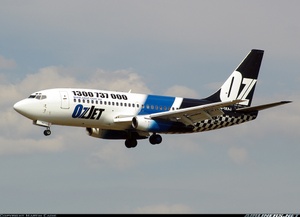 Well, I can't say that I'll be rushing to try out their service, but I know one poster on this Forum who's booked on them SYD/MEL on Saturday.

Lindsay Wilson said:
Well, I can't say that I'll be rushing to try out their service, but I know one poster on this Forum who's booked on them SYD/MEL on Saturday.

Yes indeed, I'm looking forward to reading the report too. I am very tempted to try them out, especially with the discount fare offer this week.
M

Should be a good experience. Looking forward to it! Will of course make some notes and post my experience. Maybe if I walk on the plane with a notebook and pen, they'll think I'm media and treat me better

... Then again, maybe I'll look like a spy and be strapped to the wings
M

Good to see everything is working fine with their website

Mal said:
Good to see everything is working fine with their website

Hopefully they'll be able to check me in at the airport
Click to expand...

I had wondered about these features of the website

d00t said:
I'd much rather an airline like this..

Ahh, I was sondering when this link would appear ... and in what ocntext :wink: .
Dan Murphy's: Buy Wine, Champagne, Beer & Spirits Online
Now with contactless delivery, shop online to get drinks delivered to your door or pick up in-store in 30 minutes. Lowest Liquor Price Guarantee. Biggest Range.

Australia's new business class airline, OzJet, took to the skies this morning on its first flight, from Melbourne to Sydney.

The airline plans to extend its services next year to include Brisbane, Adelaide, Canberra and Perth. And it will increase its fleet from three to 10 aircraft.

OzJet will operate eight flights a day in each direction between Sydney and Melbourne from Monday to Friday.

A further 14 flights - seven in each direction - are scheduled for weekends.

Its introductory airfare of $200 one-way between Sydney and Melbourne was announced last week.

Airline founder Paul Stoddart said an OzJet passenger would make the flight between the two cities in 20 per cent less time than it would take to travel with a rival airline.

Passengers can check in 15 minutes before the flight on a 60-seat plane - a reconfigured Boeing 737.

OzJet's carry-on luggage policy - with a capacity of 20kg - is designed to accommodate everything needed for an interstate stopover.

Among the passengers on this morning'S inaugural flight was Victoria's tourism minister John Pandazopoulos, who said Ozjet's business market focus was of great interest to the state government.

-----------
Footnote: When I opened this article on the SMH website, there was a large flashing advertisment on the same page for Velocity!