Airbus and Singapore Airlines have agreed to a delivery timetable for the first A380 aircraft.

The aircraft is planned for handover by Airbus to Singapore Airlines on Monday 15 October at a ceremony in Toulouse, France.

It will be configured with 471 seats in three classes: Economy, Business and the new Singapore Airlines Suites: a class beyond First.

Within a few days of delivery, the aircraft will fly to Singapore’s Changi Airport: the world’s first A380 home airport. There will be a short period set aside for crew and ground staff familiarisation.

World aviation history will be made when the Singapore Airlines A380 makes its First Flight – SQ380 – to Sydney’s Kingsford Smith Airport on Thursday 25 October, and returns to Singapore on Friday 26 October.

Singapore Airlines Chief Executive Officer, Mr Chew Choon Seng, said the delivery would mark the beginning of a new chapter for the aviation industry. “Everyone at Singapore Airlines is keenly anticipating the delivery of this new plane, and our people are working hard on final preparation for its entry into service. The first flight promises to be one of the most exciting occasions in aviation history.

“We are overwhelmed by the support of the community – from all over the world – for the charity auction. And I would like to thank the many partners and service providers that have followed the lead of our fuel supplier, ExxonMobil, and eBay, in donating their services for the First Flight’s charitable causes.

“While occasions like this are few and far between, we hope this enthusiasm generates support for very worthwhile causes,” Mr Chew said.

Seats across all three classes will be auctioned on the global online marketplace, eBay. There will be plenty of seats put to auction, allowing many opportunities for travelers keen to be part of history to join the First Flight experience.

For the new Singapore Airlines Suites, the A380’s First Flight will be the first ever occasion to fly on what will be a product that totally redefines luxury in the sky.

Entry into scheduled service will commence on the Sydney route soon after the First Flight.

A further announcement will be made on this in due course.
Click to expand...

No chance of SQ joining oneworld before 11 November? I have some flights I could rearrange

Any sign of the actual design as yet? Noting a lack of PE and First - given the suites are beyond first
K

Official cabin designs aren't out yet, but I'd imagine they'd be unveiled at the delivery ceremony.


simongr said:
Noting a lack of PE and First - given the suites are beyond first
Click to expand...

I have a feeling that's just euphemism for quoting you a regular F fare and tagging on a hefty Q charge at the end. Like what they've done with the 77W J.
Last edited: Aug 16, 2007

A countdown clock has been set up outside Sydney Airport: 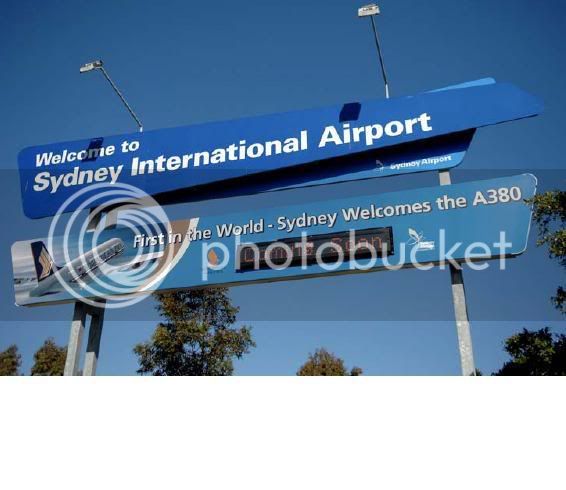 SQ/SYD media release said:
The countdown has started for the world’s first passenger service of the A380 in October. Singapore Airlines A380 will make global aviation history when it flies from Singapore to Sydney on 25 October and returns to Singapore on 26 October. To mark this momentous occasion, Singapore Airlines and Sydney Airport today unveiled a countdown clock that would track the number of days until the arrival of the super-jumbo at Sydney Airport.

“Sydney Airport is Australia’s busiest airport, and we are pleased to have their support as we usher a new era in aviation. Their enthusiasm for the entry into service of the world’s largest passenger aircraft is matched by the support of our many customers. We think this clock is an innovative way to remind people of the excitement of the A380’s impending arrival, first to Sydney,” said Mr Huang Cheng Eng, Singapore Airlines’ Executive Vice President Marketing and the Regions.

Sydney Airport’s Chief Executive Officer Russell Balding said Sydney Airport is delighted to welcome the world’s first passenger flight of the A380 in October and congratulates Singapore Airlines on this milestone.

“The introduction of the cleaner, quieter and greener A380 is good news for the aviation industry and Sydney Airport,” Mr Balding said.
“Sydney Airport has invested more than $A100 million to be ready for the next generation of aircraft. The main runway and taxiways have been strengthened and widened and new aerobridges built to accommodate these new generation aircraft. It is a wonderful achievement and we are happy to celebrate it with the Sydney Airport A380 Countdown Clock.”

The countdown clock is at the main entrance to Sydney Airport’s T1 (the International Terminal) and will keep thousands of air travellers up to date as preparations are finalised for the landing of the new aircraft.
Click to expand...

The auction for seats on the first flight is due to start in just less than 2 weeks!

I'm not really interested for certain reasons, but for those that are:

see the following two URLS:
Singapore Airlines A380
eBay View About Me for singaporeairlines_sq380

There are some pretty intense pre-registration issues that you may have to think about. Read the conditions *VERY* carefully before registering and bidding.