Not for us banana benders!
If we're lucky we might have a cyclone.
J

26/3 - Sydney - Sao Paulo via Dubai flying Emirates F both flights.
Wedding in Brazil
10/4 - Sao Paulo to Barcelona with Latam in J
11/4 - Barcelona to Santorini - Aegean Euro Biz
6 nights in Santorini for Honeymoon
17/4 - Santorini to Dubai via Amman. Flying Royal Jordanian J class to Amman then onto Emirates J to Dubai.
2 days in Dubai
20/4 Dubai - Brisbane with Emirates F - hopefully this flight stays as the A380

Imw said:
November 2018 to South Africa - returning 1st January 2019 - arriving 2nd Jan of course, so officially start of our 2019 travel. We have one week Pretoria, one week Joburg (running seminars and training mainly) then fly down to CapeTown 3 December to 1 January. Accommodation all booked. (The Strand Pavilion (timeshare), Club Mykonos Langebaan (time share) and then Krystal Beach hotel at Gordons Bay. Looking forward to relaxation, family catch-ups and great food. My excursions will definitely include the penguins at Boulder Beach. Each time we go to South Africa (three times in 2017) we try to see "something". So far elephants, giraffes, cheetahs and lions have been ticked off the list.

Further into 2019 we have plans for Hawaii, England (family) and add in something in Europe. Maybe a second trip to South Africa and Zambia later in the year.

Pleased to say I retired from "paid work" this year so it makes planning a whole lot easier not relying on being able to get the necessary holidays.

I forgot to say we are booked on Qantas PE with upgrades requested when we booked earlier this year at a great special (Mel - Cpt $5000 return for both of us, in peak season, we were pretty happy with that)
Click to expand...

Update to this original post!
England, Budapest (and then river cruise down to Amsterdam) April - May 2019. Unfortunately the whole trip will be in economy, however have got the upstairs economy rows on Qantas A380 for main leg return journeys - so hoping they don't change the planes!!! We have my widowed sister joining us on the main international flights so price was the main decision for economy.

South Africa - June 2019 - Qantas PE booked once again with points upgrade requested - on the outward journey we have scored updates about half the time, and always got the upgrade on the way home.
K

Just returned yesterday from the Finnair round the world trip, with the excellent help of an AFF member who ended up booking it for us. Every step was fabulous even though we gave up on seeing the northern lights and took an apartment in Helsinki for 5 nights instead.,,bliss

Melbourne (via HK for a quick drink) to Helsinki
Helsinki to Lisbon then a driving Portugal/Spain trip
Lisbon (quick change of planes in Helsinki) to LA
Two weeks in California, specifically La Jolla and Palm Springs as well as LA

LA to Melb and then on Fri we will fly to our home, the end of the journey.

If anyone wants further info, happy to be contacted. I probably won’t write a trip report.

I very much appreciated tips from AFFers .... e.g the hotel in Bilbao directly opposite Guggenheim was a winner! Thanks @amaroo.
Last edited by a moderator: Feb 20, 2019
R

Josh Hamilton said:
Thought I should add to the list!

26/3 - Sydney - Sao Paulo via Dubai flying Emirates F both flights.
Wedding in Brazil
10/4 - Sao Paulo to Barcelona with Latam in J
11/4 - Barcelona to Santorini - Aegean Euro Biz
6 nights in Santorini for Honeymoon
17/4 - Santorini to Dubai via Amman. Flying Royal Jordanian J class to Amman then onto Emirates J to Dubai.
2 days in Dubai
20/4 Dubai - Brisbane with Emirates F - hopefully this flight stays as the A380

Edit - Will also try and do a trip report (will be my first so go easy on me ). Flying thee long haul legs in Emirates F will be interesting and a first time for me. One flight on the 777 and two on the A380
Click to expand...

If your EK flights are award bookings, don't forget to book your chauffeur drive cars before 1 March.
Last edited by a moderator: Feb 20, 2019
J

rogerkambah said:
If your EK flights are award bookings, don't forget to book your chauffeur drive cars before 1 March.
Click to expand...

Thankyou for the reminder but already booked

business class Brisbane to HK via singapore then a china Japan cruise 2 weeks with siblings and spouses.
Returning Tokyo via singapore again. Could have flown direct via Qantas but needed the virgin points on Singapore airline to keep Gold and probably nudge Platinum

Haven't started looking at the second half of the year yet

I have a milestone birthday and the slippery slope is getting steeper so I've decided that I need to pick up the pace.

1. Early March: Kimberley in the wet. The only way to get into the Mitchell Plateau area at that time of year is by air. A nice bit of aviation involved in this trip :

This started when @juddles said to me that I ought to cease always moving while travelling and stop and settle into a place for a bit. Why don't I come to the fishing village in Chile where he is busy refurbishing his house?

My response was to first check that it wasn't the rum talking , because I said I'm prone to making instant decisions. All clear and the best time sorted, so within a few days I'm scoping a QF FF redemption. Hmmm - that's interesting - a J award on EK PER-xDXB-xGRU-SCL shows up . I didn't know EK flies to SCL . Turns out they didn't then, but it was starting in July. Bingo! Awesome! . Booked and I'll worry later about getting home.

Have a bit of a think about what else I'd like to do while over in S America. The Salta wine region in NW Argentina has been on my to-do list for years. And Uruguay has sat under the radar, but not entirely unnoticed for a while. Six weeks sounds like a nice sojourn to accomplish all these objectives - roughly two weeks in each of the three places.

Buy a LA el-cheapo LSC-xSCL-AEP where I'll rent a car and head to the mountains and back, then take the ferry to Uruguay and rent a car there for a snoop around.

Thanks @juddles! Really looking forward to this one! .

3. Mid June-mid October. A bunch of things strung together like pearls on a string using a DONE4 (and a few other linking flights.)

Start with a visit to friends in South Carolina, followed by Mexico & Cuba.

Back to LOTFAP and up to Nome, with a few days there to rent a 4WD and scope it out. Take a charter flight over to Anadyr in Russia to join an expedition cruise 'Across the Top of the World' to Wrangel Island.

Back to Nome from Anadyr, down to LAX, across to DOH and up to Helsinki for a weekend. Then to DEL via a bit of cruising on AY and JL .

From DEL to Ashgabat in Turkmenistan to start a 5 Stans tour. Told @RooFlyer I was doing this; he was swiftly aboard . Finish that in Almaty, Kazakhstan.

Back to DEL and on to BOM to fill in a few days there and at the Ajanta and Ellora caves near Aurangabad.

Then move on to Amritsar to scope out the Indian Hill Country.

Finish that and straight down to CMB for a look around Sri Lanka.

That lot should help pass the time and keep me from getting bored....

Went to an info night on Thursday. Resistance was futile - I've just snared the last berth on a two-week expedition voyage to Macquarie Island in December (depart Dunedin, return Invercargill), topped off with a QF J Sale fare PER-BNE-CHC-SYD-PER : 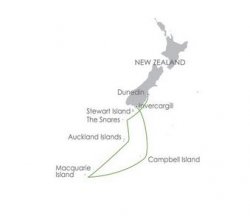 You should love Macquarie Island.A lovely bit of Tasmania.
Providing you can land of course.

drron said:
You should love Macquarie Island.A lovely bit of Tasmania.
Providing you can land of course.
Click to expand...

Do you mean permission to land (have that) or weather-dependent landing?

Weather dependent.The staff there appreciate any visitors especially if they have fresh salads and fruit.
S

I know I’m a bit late to the party, but I’ve not had much time for AFF lately!

Feb - Bundaberg to see the turtles hatching - DONE
Feb - Gold Coast for a week with a girlfriend to de-stress - DONE
Apr - Adelaide for my goddaughter’s wedding (if anyone has tips for how to fly with a 2-tier wedding cake as hand luggage, I’m all ears!
Apr - NZ for a week for uni
May - Byron Bay for a wedding
May - Fraser Island for a week
June - Glasshouse mountains
August - NZ for a week for uni, followed by a long weekend learning to ski
Oct - first ever F flight on EK, 2 nights SIN, 10 nights Thailand beach resort, 4 nights BKK, TG J home (never flown TG)
Dec - NZ for another uni trip

It’s actually a fair bit when I write it all out like that!

Well we have 2020 firmed up now.
May-Chelsea flower show.London Accom booked through london connection.just waiting to book the SQ awards.

and.. drum roll …. you are now on the maiden voyage of the Eclipse….. or have you cancelled….

Yes we have known now for a month.My guess it won't be it's maiden voyage.We have itinerary B planned in case.

Just a trip to Europe for Paddy Jnr's wedding in Poland - which should be an awesome experience!

GPH said:
Not a lot actually planned yet, the AKL lunch is looking firm, we have an extended family reunion in Bendigo in March, then off to France for a month in April.
Click to expand...

Things have certainly changed for us, we have too much on to justify a month away , so that got the kybosh. As a consolation we have decided to revisit Lombok in June for a week.

Nabbed a Luxury Escapes Gold Coast package to use sometime this year (haven’t booked dates yet). Self contained apartment will be good with Bub.

blackcat20 said:
Nabbed a Luxury Escapes Gold Coast package to use sometime this year (haven’t booked dates yet). Self contained apartment will be good with Bub.
Click to expand...

And for you now, luxury will be an on-site laundry!