Will it be the Dom or the Krug? SQ J, EY F, EY Apartments & SQ Suites

With 7 days to go until we depart I thought I would get a head start as I will be attempting to make this a live report over the next month.

So far these are the flights we are scheduled to take:

Planning:
I began planning this trip close to 12 months ago after we had to cancel our planned March/April 2016 Suites trip to Japan. I was therefore determined we would use those points on SQ R and began looking at destinations where we could put our ever growing Velocity points haul to good use.

We decided that we would both like to return to Europe now that we were not restricted to a backpacker budget.

Around this time I learned of the AA devaluation, I had originally planned on using our Velocity points to try and get into the EY Apartment on one of our legs but with the relatively high AUD:USD at the time and a decent bonus on buying miles I worked out we could fly MLE-AUH-LHR in J/F for 40,000 AA miles which would cost about $1,200 AUD each. No brainer right?

Now that I had one flight booked it was time to get serious about the rest.

I wanted to avoid departing LHR due to the ludicrous APD and there was plenty of Suite availability out of ZRH so we booked in ZRH-SIN-PER for a further 97,750 KF.

The MACQ HHonors card gave us Gold status, 1 free night certificate and 40,000 points each which we topped up with some miles bought with a 100% bonus offer to book the Conrad Rangali. We ended up with 2 nights booked on weekend certificates and 2 on points.

While we were buying & gifting points I acquired some more to book 5 nights at the Waldorf Edinburgh over Hogmanay. This cost 200,000 (1 award night free) HHonors points with the hotel going for crazy money on cash rates buying points was a much cheaper option.

Hilton also decided to be nice and make us both Diamonds so we decided to reward their generosity by booking the Conrad Singapore, Hilton London Bankside, Doubletree Glasgow and Hilton Prague Old Town on flash sale rates that have happily coincided with the Double/Triple Up and 5,000 Visa bonus.

an early subscribe. you'll have a great time at Rangali!

I,m coming along too.

It's going to be a long 5 days waiting for this one to kick off!

This looks like a ripper !
I will be glued

Looking forward to the TR

Checked in for the flight tomorrow and in a new experience for me I have "checked in" to the hotel before arrival using the HHonors app.

Unfortunately at present there are no suites available for sale nor upgrade for 2 of the 3 nights we are at the Conrad Singapore so I have selected an Executive Room on the 30th floor that should have some sort of view over Marina Bay.

I won't be using the digital key though as we arrive about 8pm so will be enquiring at the front desk if any Suites have become available.

Count me seated, probably in Y.

Greetings from the PER Silverkris lounge.

It was an ordeal to get here. I suffered major delays at the TRS desk as a result of a Chinese student returning home for a wedding and attempting to claim every cent of GST he had paid in the last couple of months including spirits he had bought from BWS and since drunk. He was given a rather stern lecture by the customs agent saying that he would have to pay duty if e returned with a rather expensive looking diamond ring he had bought (and was wearing). He also had multiple copies of receipts instead of originals which just old not fly. It was quite entertaining as I was in no rush.

While I understand that this lounge doesn't get a lot of traffic it really is poorly designed. Really lacks tables and power points. It reminds me a bit of the old VA dungeon.

However it is quiet and comfortable so I am happy with a cold beer and cricket on the TV. No champagne on offer so deciding to get into the spirit with a quick curry and a Tiger.

Not a great amount of options but what is hear is fresh and tasty. While I wouldn't rush back it is better than nothing. In case you were on the fence they do have party pies.

Apologies for the poor quality photos but I had to snap them quickly on my phone while we were the only ones in the lounge. 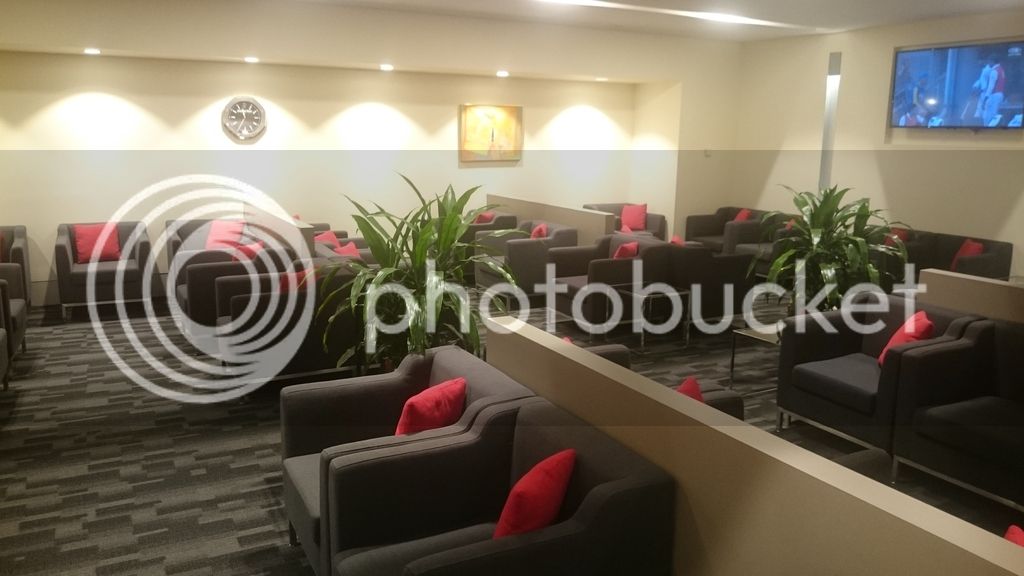 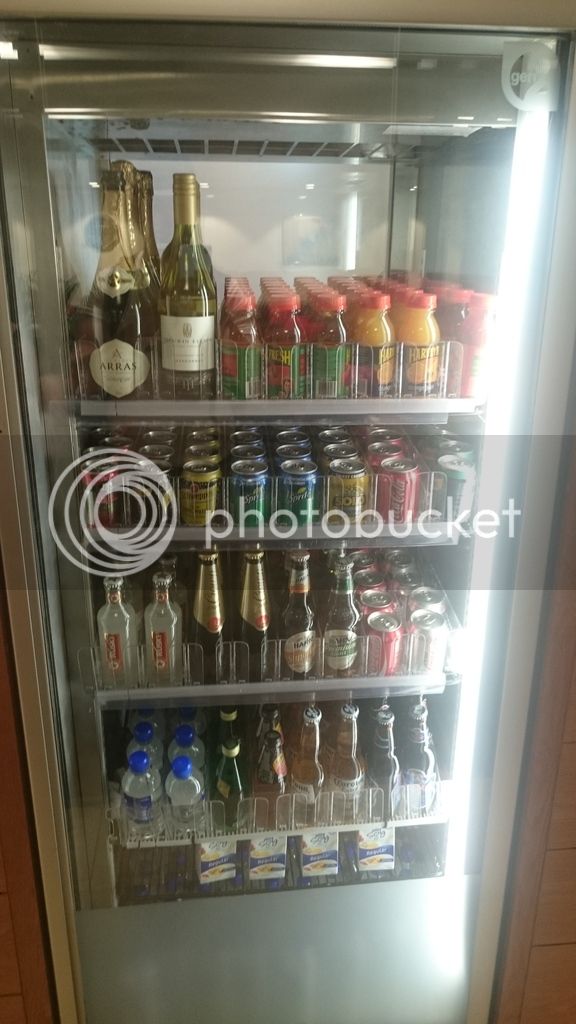 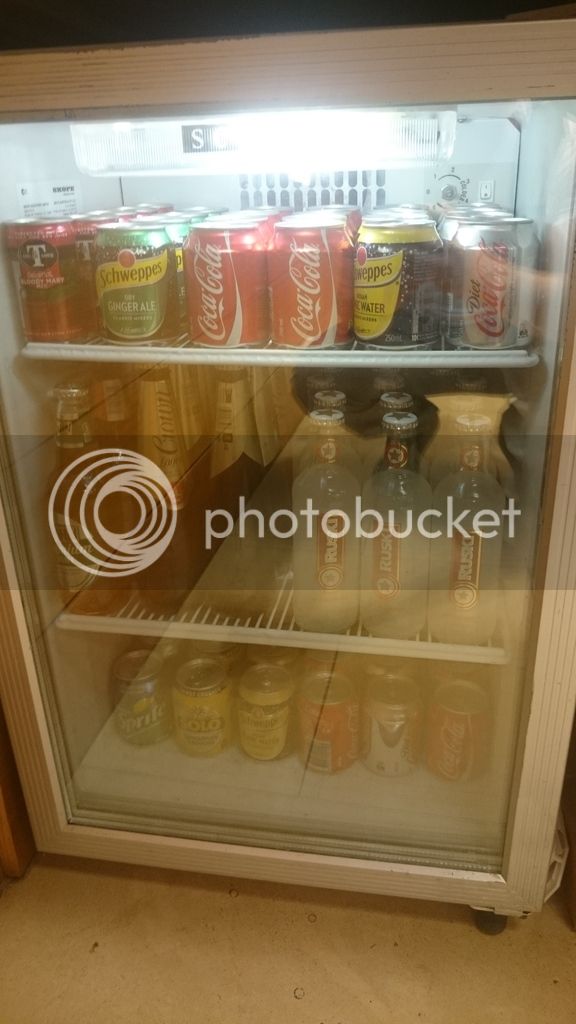 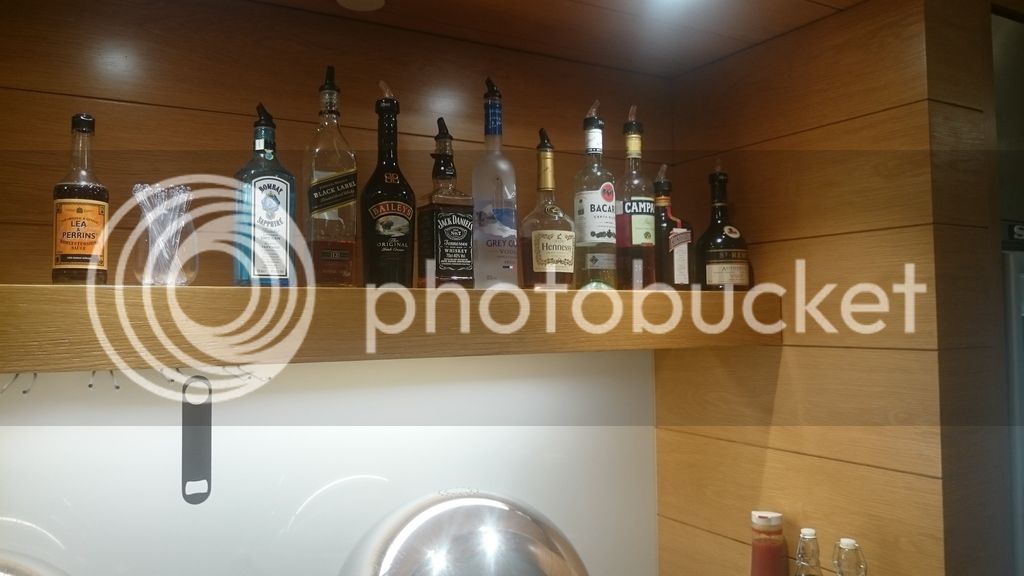 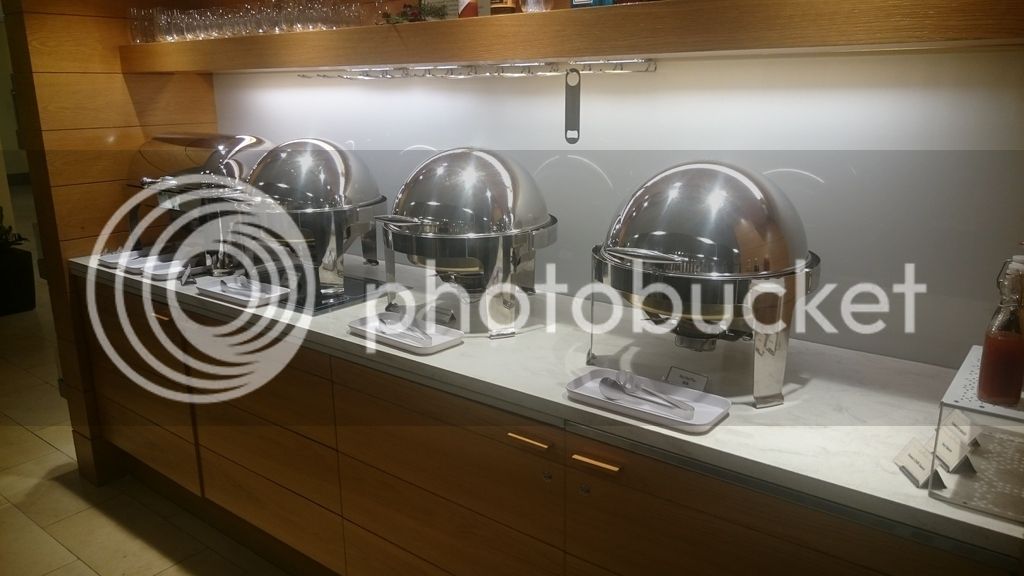 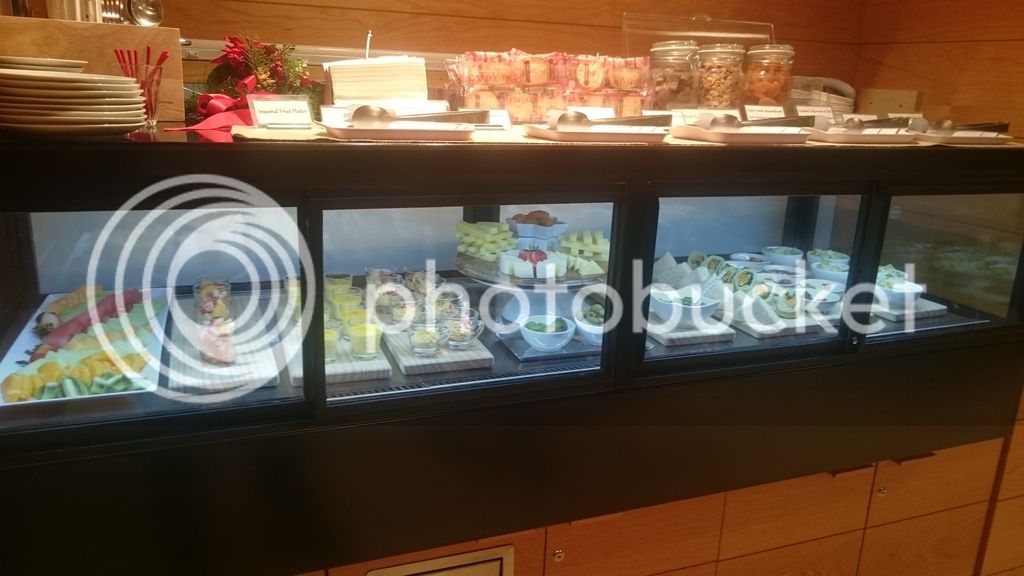 I am back in the room slowly digesting the Oscar's Supercharged Sunday Brunch at the Conrad Centennial Singapore.

But you will hear about that later.

After a prompt boarding announcement in the lounge we made our way downstairs to gate 51 to board SQ226. We strode past the rather long line for Y t the empty J and status line.

We were greeted by the always lovely Singapore girls (and guys) to a 3/4 full J cabin. 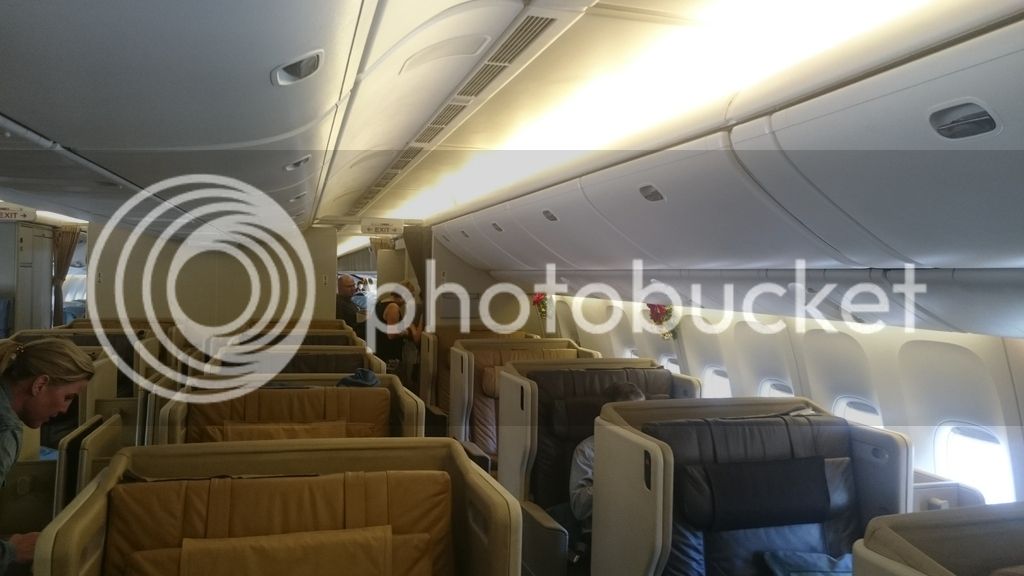 The seats are starting to show some wear and tear but were still extremely comfortable and I would say would give quite a few F seats a run for their money.

I settled into 12D as we are travelling as a pair, however 11A would be my choice as a single traveller as the bulkheads have a lot more foot space with the full length bench. 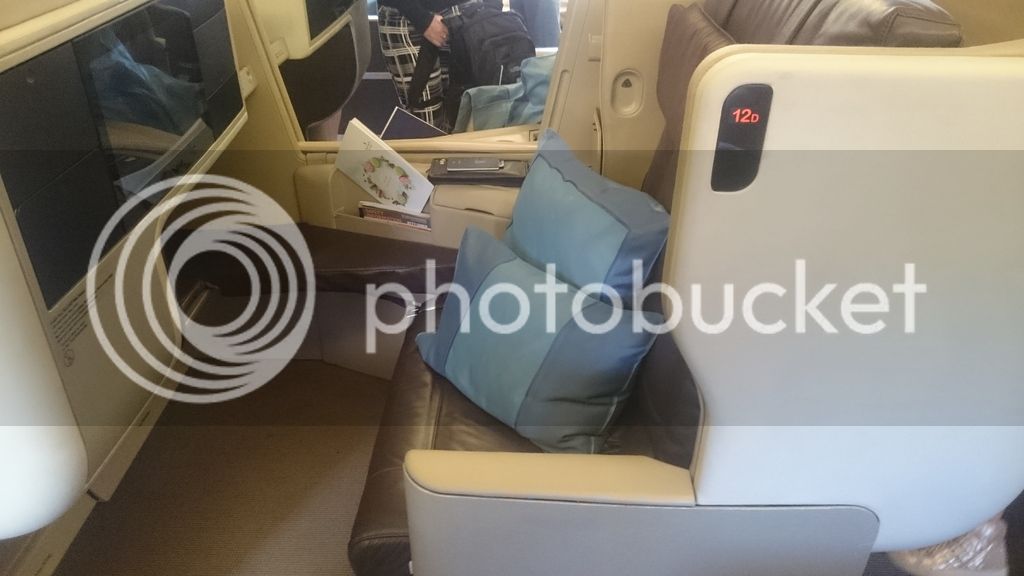 11A, just look at that footspace with added festive flourish. 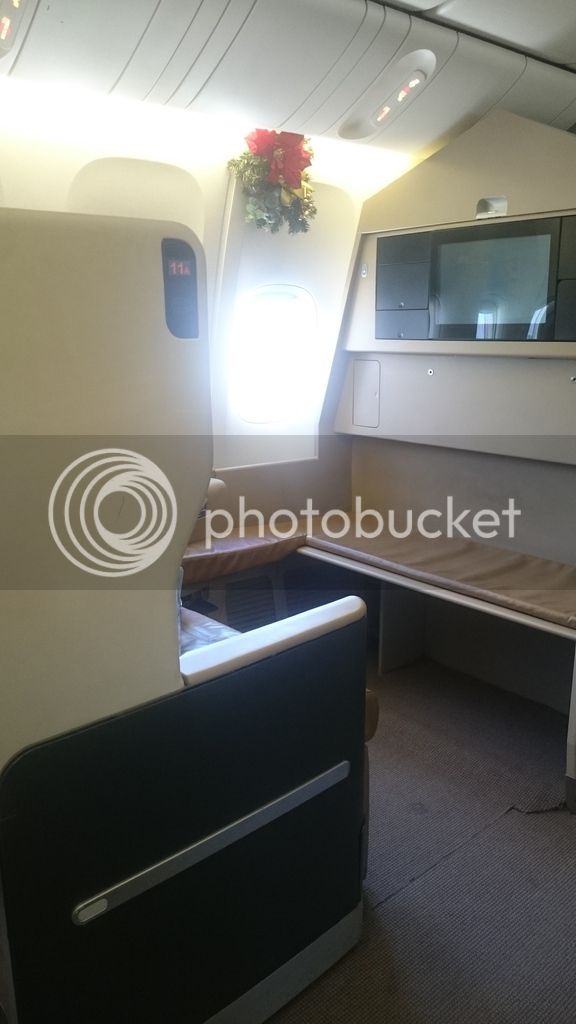 These seats have an impressive amount of width. 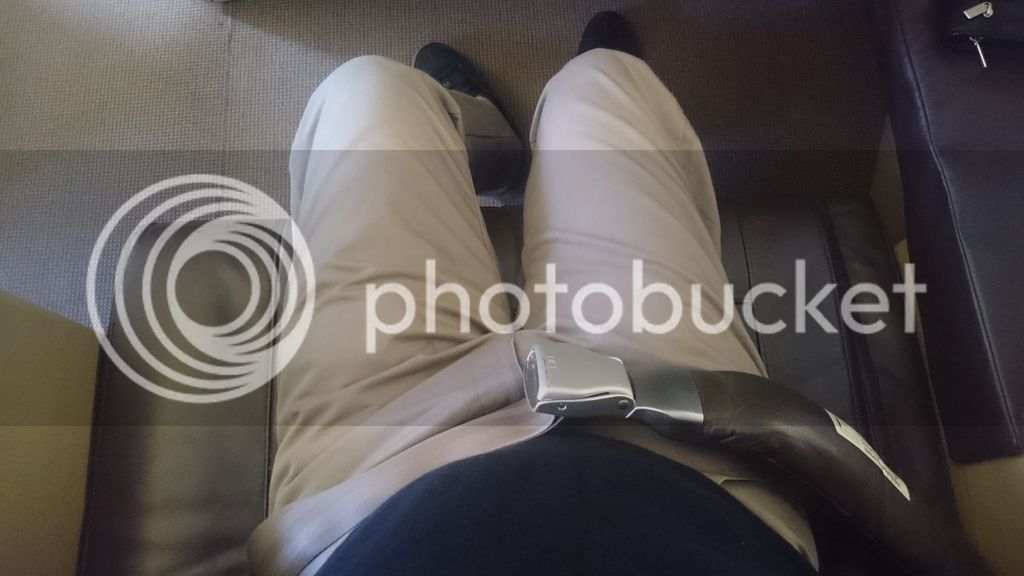 They are not without fault however. Primarily the lack of a USB port or touchscreen display means they are showing their age when compared with the current generation. The seats themselves are showing signs of wear and are due for a refresh.

The screen is quite low res but a few more champagnes followed by a very tasty highland park made this much less noticeable.

SQ clearly DKWIA and supplied socks and slippers that matched nicely with my trousers. Perhaps I should let Mr Hancock know as he seems to have not much luck and the old colonies are clearly surpassing the standard (or lack thereof) set by the former masters of the Empire these days. 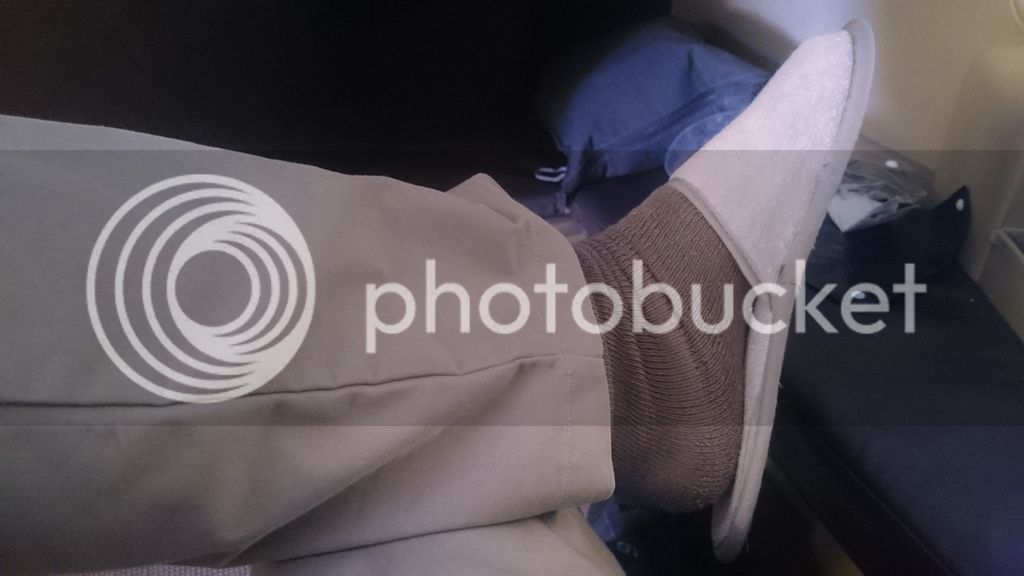 The bathrooms were nicely appointed with plenty of amenities and a fresh orchid. The wife was less than impressed however when I presented her with a SQ branded sanitary napkin after my first foray aft. 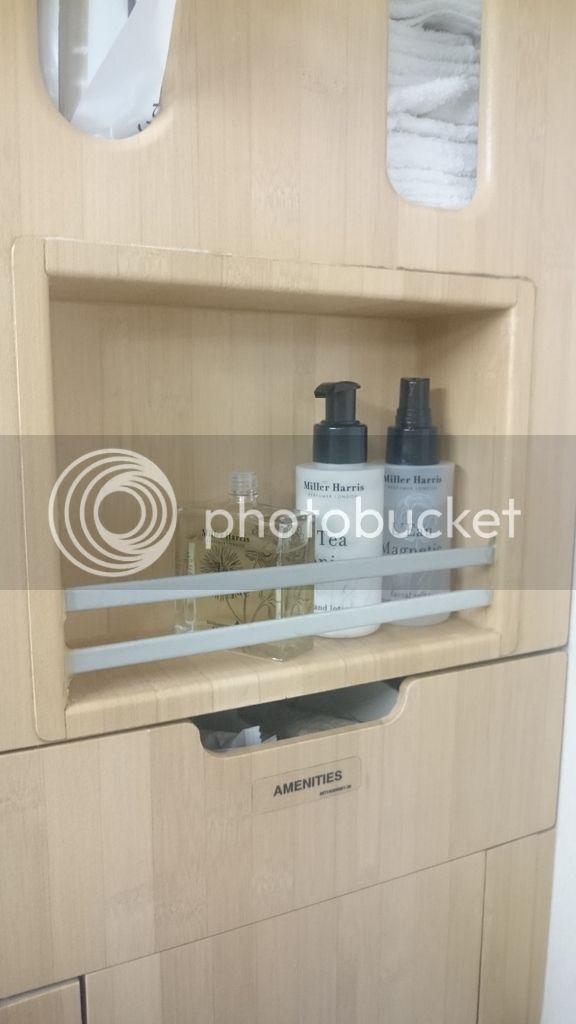 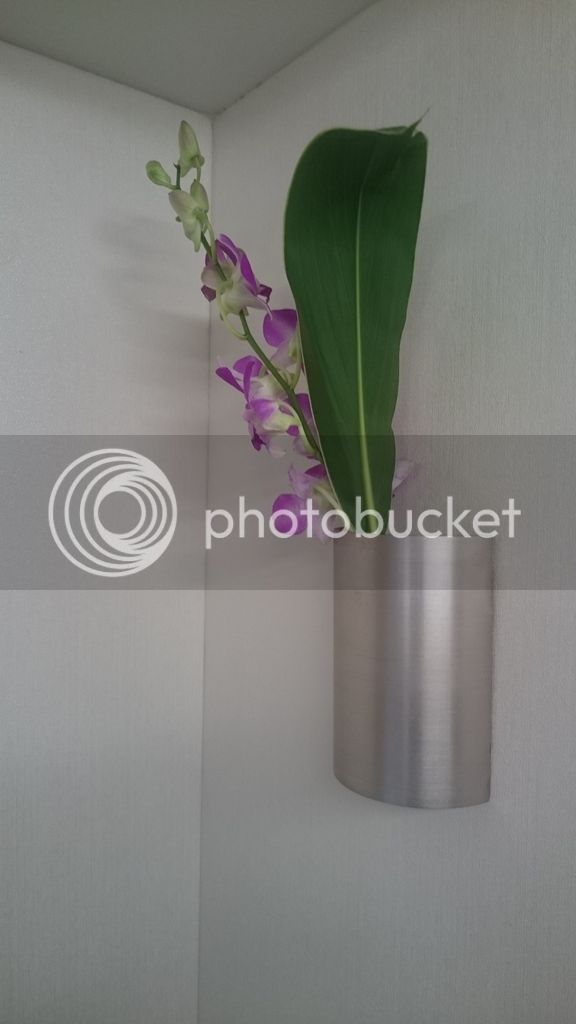 Sponsor are you sure there is no USB charging port behind the drop down panel beside TV?

Some metal the 'blocks' have been removed from J cabins clearly they have on your bird - others still retain them - the Diamond J seats are just too wide to rest your elbows each side without the blocks - but I am sure after a couple Charlie Heidies all will be fine - hope you have a great trip.