Planing few days in Alsace and Burgundy regions as part of Euro road trip in September. Looking for advice on the best villages and wineries to visit.

I visited both places in April.

For Alsace, we stayed in Colmar with its canals and timber houses, which I recommend. From there we took a quick drive south to the village Eguisheim. The following day we drove north along the ‘Wine Route’ through Turckheim, Kaysersberg, Riquewihr and Bergheim. It might be interesting to stay in one of those villages but personally I think I would find them a little too small and Colmar was the right size for us.

In Burgundy we based ourselves in Beaune and took day trips from there. Beaune wasn’t the most beautiful place but our impression might have been coloured by constant rain during our stay. It’s probably the best place to learn about wine though. Patriarche Pere et Fils in town is impressive for its huge collection and underground cellars.

You probably know this but French wineries are a lot of the time quite small and usually ask for you to make a booking rather than drop in. We found it a bit hard to ‘access’ especially given our French and the lack of English. So I recommend doing a wine tour - we did Safari Tours from Beaune. They can take you to all the little wineries and help you translate and make the most of it.

Thanks for your input @robbegong.

Few questions, do you think 3 nights in Alsace and Two nights in Burgundy is enough? Also, did you visit the two big cities in the region, Strasbourg and Dijon? We thought to spend one night in each but can change if there’s nothing interesting to see there.

Strasbourg cathedral Boomy! Although I’m not sure whether that’s your thing. I’m aiming to visit the area and adjacent places in Germany in April or May next year so I’m looking forward to a good TR from you

RooFlyer said:
Strasbourg cathedral Boomy! Although I’m not sure whether that’s your thing. I’m aiming to visit the area and adjacent places in Germany in April or May next year so I’m looking forward to a good TR from you

I’m thinking to make Strasbourg our base for few days due to its proximity to Black Forest and Alsace’s wine region. Accommodation seems quite reasonable, particularly on the weekend. Will probably add few days in smaller town to get the countryside vibe, maybe a nice chateau because when in France…
I

Strasbourg is quite a large place. In terms of architecture and vibe far more German than French. Nancy which is not far away was much prettier IMHO. Dijon was also nice, but nothing to rave about. Worth a visit for a day though.

boomy said:
Thanks for your input @robbegong.

Few questions, do you think 3 nights in Alsace and Two nights in Burgundy is enough? Also, did you visit the two big cities in the region, Strasbourg and Dijon? We thought to spend one night in each but can change if there’s nothing interesting to see there.
Click to expand...

I think if you can swing it, you’d appreciate 3 nights in each but you probably could get away with two in Burgundy. There is the medieval hospice to see in Beanue one afternoon/morning, and then a day doing a wine tour, plus you could see some of the countryside on your way in and out.

We didn’t visit either of the big cities other than to pick out car up at Strasbourg station, so I can’t comment, sorry. We were quite deliberately avoiding the larger cities just because of the kind of trip we were on and our personal level of interest in museums/city sights. The way it was described to me is that Colmar is in some ways a mini version of Strasbourg (in the sense of it having the nice old buildings and the canals like in Strasbourg, plus a big art gallery of its own).

Strasbourg and Colmar are about an hour drive from each other, with the wine route villages in between the two, so I reckon you’d end up exploring the area either way. If there are things in Strasbourg that catch your eye you could always day trip to Colmar (or vice versa).

Having said that you mentioned you were weighing up using Strasbourg as a base to visit the Black Forest too. We’d separately spent four nights relaxing outside of Baden-Baden and exploring the Black Forest before going to Alsace, and I do recommend that experience for sure!

We really enjoyed our stay in Strasbourg, with the Ponts Couverts and areas nearby. We didn't go into the centre of Nancy, but skirted around on our way towards Signy-lʼAbbaye. The bit of Nancy we saw was very unappealing.

This is around the Ponts Couverts. 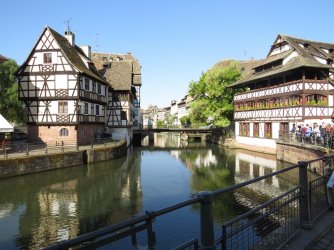 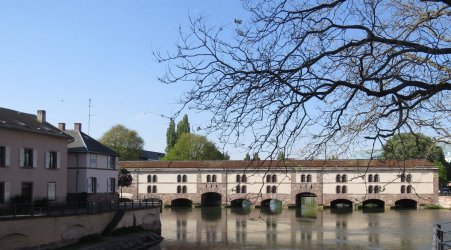 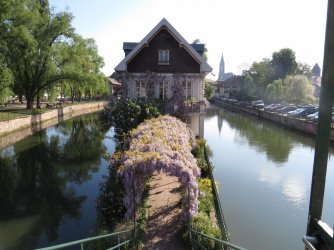