I knew that there were a few teething problems when this hotel opened but fortunately I think I managed to escape most of that.
Arrived this evening after a pretty delayed flight from LAX. Booked a Deluxe King Runway and somehow ended up in a double queen but as it’s a long schlep from check-in and I’m traveling solo I didn’t bother following it up.
To get here from JFK you need to take the AirTrain to T5 and go to the Jet Blue baggage area. The lift to the hotel is signposted from there. Check-in is largely an automated process at kiosks but humans on hand to help (needed for me as my card wouldn’t swipe).
The building itself is absolutely stunning, pics can’t do justice it but I’ll try. The rooms aren’t huge but pretty nicely fitted out.
Unfortunately it was too windy tonight to have a swim in the rooftop infinity pool so I had to settle for a cocktail in the Connie instead. Tragedy I know 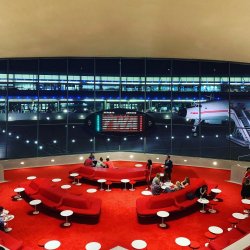 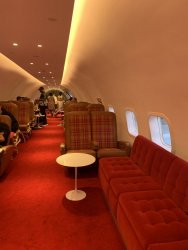 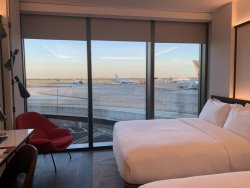 Great! Thanks for posting. Am going there next February. How was the sound proofing in the room?
I

RooFlyer said:
Great! Thanks for posting. Am going there next February. How was the sound proofing in the room?
Click to expand...

It’s pretty decent actually. Can’t hear this really other than a slight hum which isn’t unpleasant. 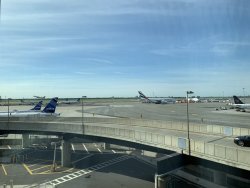 A couple of more pics 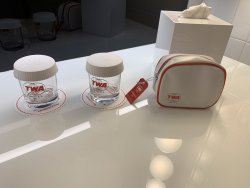 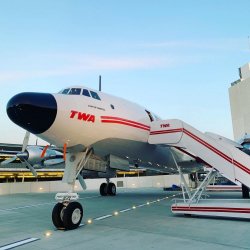 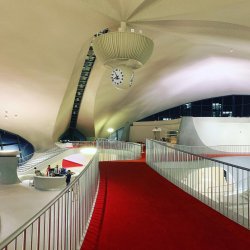 Update on the overall stay. Now checked out and in Manhattan.
There is still some signs of building/ construction finishing off or “snagging” as my Dad would say. Didn’t interfere with my room or stay but if you are the sort of person who gets annoyed by that steer clear for the next few weeks. The Cafe is open for breakfast in the morning, the prices are quite high though and the portions not huge based on what I ordered and looked at being served around me. Beautiful space though and the staff are young and cheerful.
The Foodcourt downstairs has one or two places open for breakfast and Intelligentisia is there for coffee.
Overall the highlights of my stay were cocktails in the Connie, plane spotting from my room and the pool and just the sheer enormity of the building/ lobby/ lounge. It’s sinply breathtaking. 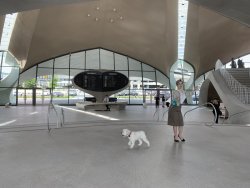 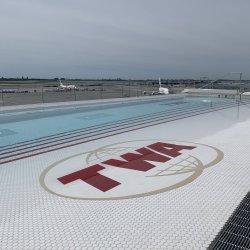 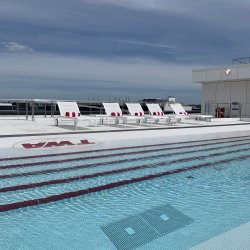 I want that amenity kit type bag which I presume was the bathroom products.

I love to travel said:
I want that amenity kit type bag which I presume was the bathroom products.
Click to expand...

Yes it is. Even if you don’t stay you can purchase it in the gift shop

From recent on-line reviews (OMaaT and Trip Advisor), it looks like the 'initial' issues with staff are continuing - everyone agrees the lay-out is stunning, but the lack of attentiveness of staff is nearly always noted. Hopefully that's on a USA scale, where I find tip-seeking 'attentiveness' can be over-bearing, so maybe its back to the Aussie-type norm.
You must log in or register to reply here.
Share:
Facebook Twitter Reddit Pinterest Tumblr WhatsApp Email Link