Haven’t done TR for a while and thought this trip had some interesting flights worth sharing. There will be many photos which tell the story better than my words. Since I was flying back home this TR will not be about the destination but focus on the journey - airports, lounges, flights, hotels etc.


It was supposed to be another standard return flight back home, something that can be easily done in two flights but such a “short” journey is too boring so instead I’ve decided to start my 2019 travel year with 5 days trip, 7 sectors on 7 different aircrafts and a healthy mix of business and first class:

Earn Cash from everyday purchases
Get paid up to 25% in real cash from your everyday purchases from leading companies such as Virgin Australia, Booking.com, Woolworths, Coles, Apple, Microsoft and much more. Free to join and no catches!
Recommended by the Australian Frequent Flyer
I

How on earthy did you get all that for 100k points?

I'm settling in for this...

I love to travel said:
How on earthy did you get all that for 100k points?
Click to expand...

boomy said:
By the book it should have been 110k but AA decided to be generous and it gets even better
Click to expand...

Sitting back with a glass of wine ready to watch

Looking forward to this report!

My journey starts with early morning drop off at TLV airport for 7:30am departure. Very light traffic this time of day got me there just before 5:30am, exactly as planned.

No queue at the Business class priority lane and after the usual questions asked by pre-check-in security I got the infamous sticker put on my passport.

Every passenger leaving TLV gets one of those stickers prior to check in. What appears to be a barcode with random numbers underneath actually have an important meaning which can potentially lead to further questioning by security. From what I know at least the first number (marked in red circle) has a specific importance. Ranged from 1 to 6, the highest the number the more security risk a passenger is with 1 and 2 being extremely low to nil. Passengers who get 5 and 6 can expect further questioning to follow.

When I saw the number 1 on my sticker I knew the remaining security process will be smooth sailing. TLV airport is actually one of the better airports to go through, providing your number is not up (pun intended). There is no problem taking liquids such as bottles of water and no need to remove shoes. Only laptop and belt need to be removed for scanning. One must wonder which sophisticated scanning machines TLV airport has that others like German airports can’t afford to buy.

After the sticker ceremony I went to check in my luggage all the way to Singapore. The RJ agent could only gave me BP for my flight to Amman and said I must get my other EY BPs there because it’s a different airline and she can’t do it.
Didn’t sound right since all flights in one PNR departing same day. I suppose the reason was either RJ’s system doesn’t connect with EY or the fact that EY is part of UAE which has no relationship with Israel hence can’t print BP in TLV. At least my luggage was successfully checked in all the way to SIN. 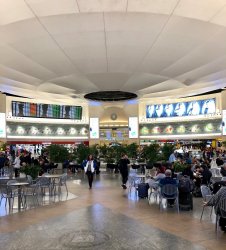 Had no plans to do any shopping and went strait to the lounge to have some breakfast.

Foreign airlines flying to TLV (with the exception of BA and UA) use the generic Dan lounges which are also part of PriorityPass. There are 3 lounges in total which are mostly similar and quite bad, or at least that’s how they used to be... 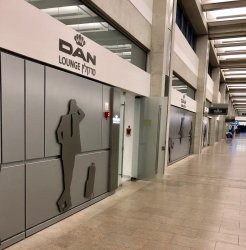 As soon as I entered nothing looked similar to what it used to be. Apparently two Dan lounges were recently refurbished (the third will be done soon) and the improvement is significant. 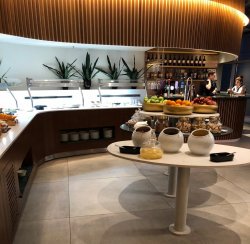 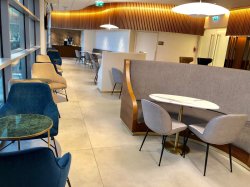 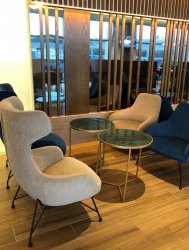 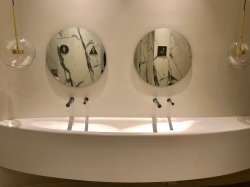 I don’t want to exaggerate, the new lounge is by no means world class but it’s much better than what used to be offered to pax traveling on foreign airlines (LY pax get to use the King David lounge which is in a different league).

While seating in the lounge I’ve noticed my plane just arriving. It’s a pretty bird the Embraer and the RJ black livery gives it kind of luxurious private plane look. 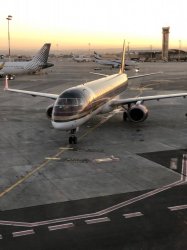 Onboard J class was 3 rows in 1-2 config. The seat was comfortable with sufficient legroom in bulkhead. 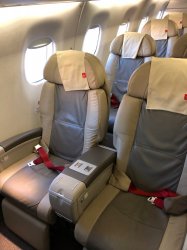 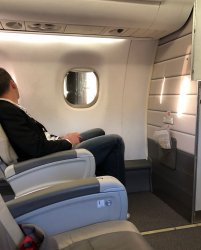 While boarding was on time we ended up waiting almost 30 minutes with the door open for connecting passengers which arrived late. Since the flight was only 25 minutes we got to spend more time on the ground than in the air!

J pax were offered pre-departure drink (water or juice) and that concluded the onboard service as seatbelt was left on for the entire flight.
The plane cruised below the clouds the entire flight and we could enjoy nice views on beautiful sunny winter day. 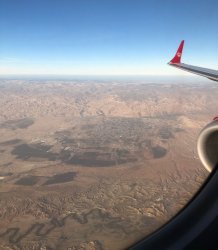 Soon enough it was time to land at Queen Alia airport. 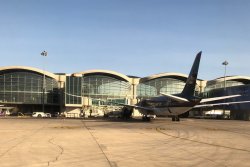 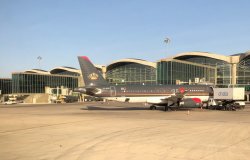 The plane parked in remote stand where two buses were already there waiting, one of them dedicated for J pax.

Looking forward to reading this!

You weren't offered a pre-departure Arbabic coffee? Its really yummy. I think it had cardamom added.

When I landed in AMM, I was the only one in J. Needless to say having the bus to myself seemed a little strange. They certainly KWIA
J

Agree the refurbished Dan lounges are better now than BA lounge. I’m surprised TK don’t open their own lounge. With up to 10(!) daily flights between TLV and IST, some on A330s, they must be paying significant premiums to the contract lounges.


Daver6 said:
You weren't offered a pre-departure Arbabic coffee? Its really yummy. I think it had cardamom added.
Click to expand...


Daver6 said:
When I landed in AMM, I was the only one in J. Needless to say having the bus to myself seemed a little strange. They certainly KWIA
Click to expand...

And a nice bus too, with wide comfortable seats.

Josh Hamilton said:
Also curious to how you went with getting your boarding pass at Amman as I will probably have a similar situation to yourself in two months time
Click to expand...

Then you’ll want to read about my experience in AMM...