A giant ash cloud is affecting some flights to and from Australia following a major eruption of the Rabaul caldera in Papua New Guinea.

Satellite imagery shows the plume has reached a height of about 18 kilometres, indicating a significant eruption.

Commercial flights typically cruise at altitudes of between nine and 12 kilometres and the Bureau of Meteorology has issued an advisory to airlines indicating where the cloud is likely to spread.

"The initial low-level ash is moving northwards, but as it gets a bit higher it's likely to spread out both to the north and south along the western side of the volcano," said Craig Earl-Spurr, meteorologist at the bureau's Darwin Volcanic Ash Advisory Centre. The bureau will continue to monitor the plume as it dissipates.

Qantas will reroute some flights around the ash cloud.

"As a result of the volcanic ash cloud, QF21, QF22 and QF130 will reroute their flight path to fly around it," a spokeswoman said.

Flights QF21 and QF22 operate between Sydney and Tokyo, while QF130 is a flight from Shanghai to Sydney.

Virgin Australia had no flights scheduled to operate near the ash cloud, but the company will closely monitor the situation as it develops, a spokesman said. 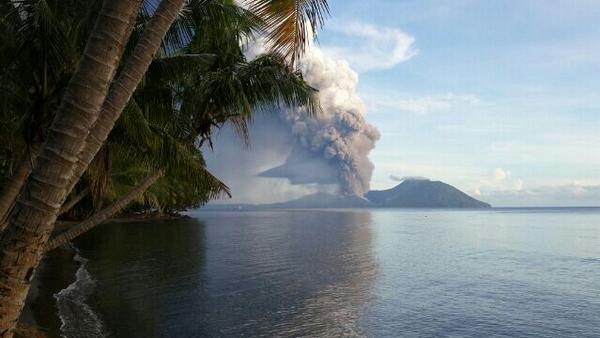 Buy Wine Online | Vinomofo Australia
Vinomofo is the best wine deals site on the planet. Good wines, real people and epic deals, without all the bowties and bs.

That's a tall ash cloud. o.o
Would that effect other QF flights besides the 3 mentioned?

JQ flights between CNS and KIX/NRT would be getting close to being diverted you would think.