Have been looking at various posts, various sites and it looks like there is going to have to be a lot more space allocated to plane boneyards

The market value of some older (and not so old) planes will, I think, be dropping markedly over the next 6 months with a glut of second hand planes going idle.

Doesn't augur well for AB & B to be able to sell new inventory.

Air Canada is accelerating the retirement of 79 older aircraft from its fleet – Boeing 767, Airbus 319 and Embraer 190 aircraft, with the Embraer aircraft exiting the fleet immediately. Their retirement will simplify the airline’s overall fleet, reduce its cost structure, and lower its carbon footprint.

Alaska Airlines announced today the immediate retirement of its entire fleet of 10 Airbus A319 and the retirement of two Airbus A320. The airline will continue to operate with a handful of A320s. The A321neo will not be retired.

American Airlines long-haul fleet will be focused on the 787 and 777, the carrier has announced the retirement of the Boeing 767 and the A330.

Qantas: There’s a likelihood 747's will not return to the air

American says its narrow-body fleet will become more simplified with just two coughpit types, variants of the Airbus A320 and the Boeing 737. The airline expects this to result in training efficiencies and streamlined maintenance.

In terms of wide-body aircraft, American will fly only the Boeing 787 and 777 going forward.

Source: Forbes
Last edited: May 10, 2020
Buy Wine Online | Vinomofo Australia
Vinomofo is the best wine deals site on the planet. Good wines, real people and epic deals, without all the bowties and bs.

Lufthansa flew yet another Airbus A380 to Teruel for long term storage today. The aircraft is registered D-AIMJ. Lufthansa said they will ferry out a total of 7 Airbus A380 for storage in Spain

(not known if these will return to service)

Lufthansa CEO expects the Lufthansa Group fleet to be smaller by 100 aircraft and to have 10,000 fewer staff after crisis.

Austrian Airlines to phase-out of the original 18 Dash turboprops, which was decided and started in 2019, all seven A319 jets and three of the six B767s are to be retired by 2022.

Virgin Atlantic has already brought forward the retirement of their a340-600 aircraft.

Virgin Atlantic just announced the immediate retirement of its fleet of 7 Boeing 747 aircraft.

British Airways has sent six of its 12 of the Airbus A380 aircraft to a facility in France for mothballing.

Delta’s CFO Paul Jacobson announced the possibility of his airline retiring older airframes including the McDonnell Douglas MD-88 and MD-99,

Air France, one of the first carriers to announce it was dumping the A380, has grounded its ten A380 superjumbos indefinitely.

“We know the A380 is over" Emirates president Sir Tim Clark declared earlier this week, although for balance he also allowed that the Boeing 747 had similarly seen its day.

"But the A350 and the 787 will always have a place,” Clark told The National, positing a future that belongs to fuel-efficient twin-engine jets, at least where long-range flying and the global networks of hub-based airlines was concerned.

While the last published price list of an A380 was $445 million, the superjumbo's value has been plummeting for some time, with the Covid-19 effect certain not to improve matters.

Valerie Bershova, valuations analyst at Ascend by Cirium, recently estimated that the market value of an A380 now ranges between $77 million for a 2005-build "half-life" aircraft and $276 million for a new 2019-build aircraft in "full-life" condition.

In a negative development for Airbus, Delta is deferring indefinitely nearly all capital spending, including new aircraft deliveries. As of the beginning of the year, Delta was expecting to take delivery of 66 Airbus aircraft in 2020, including 23 A220s and 31 A321-200s. Delta has 100 A321neos on order, but due to Airbus production delays it was only expecting to receive one this year. 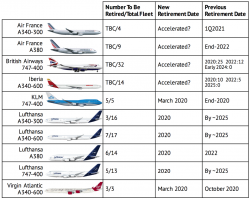