I booked an award ticket for myself and partner using flying blue miles on Aerolineas Argentina from Mendoza>Buenos Aires>Cancun in whY return. First problem occurred at check in when I found out our supposed business class ticket from Mendoza was only economy (Air France website said business - apparently it is a glitch with fare codes and they gave me 3000 miles for their mistake, very generous for making me look like an idiot - not). Outward flight from EZE was delayed an hour, no real problem except crying babies all around me - I definitely notice the increased fertility rate here compared to Australia.

These direct flights to Cancun (AR1370/AR1371) only go once a week on a Sunday with a quick turn around and only during this time of the year. History (flight aware) told me they are nearly always delayed like most other Aerolineas Argentina flights. Had an awesome first 4 days in Mexico then Montezumas Revenge hit me for the last 3. The scheduled return flight from CAN>EZE is supposed to leave at 09:35 on Sunday morning - we pack our bags Saturday night - check email and set alarm nice and early. Get to the airport and check-in only to be told the flight is delayed 2 hours. No reason was given. OK I thought, expecting a delay because again - it's Aerolineas Argentina. Through customs we go and I get online to check the status of the outbound flight that we will be on going back and find out that it took off 4 hours late from EZE - not 2 hours like we were told at check-in. The check-in agents would have had this information available to them since the plane had taken off already 4 hours delayed way before check-in opened. No notice or warning of this delay was passed onto any of the passengers via any method to avoid waiting an extra 4 hours at the airport unless the plane of course turned into a super sonic jet and made up 3 hours in an 8.5 hour flight.

The display board was still telling lies and they kept pushing the departure time back in 30 minute increments even though I knew the plane had taken off 4 hours late and could not possible make up more than 3.5 hours. Every 30 minute announced delay was of course met with anger by passengers. The majority had young children who were getting restless and I was about to fell this wrath on board !! Now people had to start buying food and lunch because it was past midday. No water or vouchers were offered by the airline because they kept delaying the flight only 30 minutes which continued giving people hope boarding was just around the corner. Eventually like I thought boarding starts 4 hours after scheduled departure time, massive round of applause from passengers (very expressive bunch the Argentines). "I would like to welcome all passengers flying in Club Condor and tho....


OK I get it, people are angry and want to leave but what makes people think it's OK to ignore the requests and stampede towards the agent. There is a reason they call certain groups and rows. Take off 4.5 hours after scheduled departure time. Being Mr Smart Guy we got the exit row for the extra leg space and proximity to the bathroom in case Montezuma wanted to visit me again. Quick glances around and you guessed it - surrounded by young kids and babies !! Also lucky enough to get two lovely young boys that enjoyed playing Hulk (had both of our seats being whacked and kicked for the whole 8 hour flight even after asking the father to please try and not let them do it).

Cruising altitude is reached, babies are screaming, seats are being kicked - time for us to zone out, movie on and go to another place. This is where I introduce to you the knew InvisiTV, it's an invisible TV that lets you see through it. I was lucky enough to be one of the first testers of this magnificent device. Don't have much else to say except my expectations were already low - I didn't think they could go lower. Never fear, my partner has a TV we can share... Nope - not happening either. I have seen better quality on a Gameboy Advance. 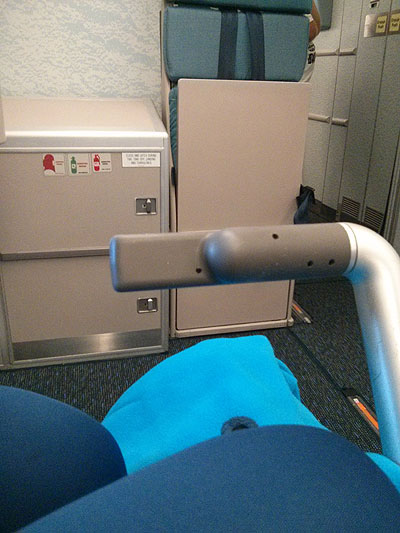 Third option is of course the dependable noise cancelling headphones, unfortunately my partner was left to listen to the naughty young girl across the row who knew screaming = attention. There was a very cute baby boy who was silent the whole flight - 10 points to him. The Hulk impersonators behind us also had a new toy that didn't seem to have a headphone jack.

Trying my best to put my mind somewhere else good old turbulence hits - seat belt light goes on. This is where I learnt how ignorant some people can be to their safety and those around them. I didn't realise the seatbelt sign meant stand up and walk up and down the aisles. The worse thing was the hostesses hardly policed the issue at all. After the late lunch was served I saw the ones working in my area of the plane disappear down into their cabins and not show up again until 2 hours before landing. No water or drinks were offered between then. These hostesses where the same ones that flew up to Cancun with us. The button that is used to get the attention of the air hostess would be more useful as a light on a Christmas tree. No response whatsoever when it was activated.

The food was average at best. I didn't get any pictures - by this time I was out of patience and wishing to really be somewhere else far far away.

We finally arrived at 00:45 (queue the applause from the passengers - what other nationalities have a habit of clapping when landing?), 4.25 hours after schedule. Begin taxing to the gate when this happens again - this time on board.

The seatbelt sign was still illuminated and we still were taxing to the gate. I saw one lovely lady who was near the last row try break the 100m record by tearing down the aisle just after landing and turning onto taxi strip. The hostesses stayed seated and didn't say a word to anyone. Eventually someone must have told the Captain who then came over the intercom and told people to sit down or we wouldn't be going anywhere. Back to the seats they go. All in all a rather quiet flight. I thought I had seen it all but no - this morning on the flight back to Mendoza the nice lady behind me decided to make a phone call on speakerphone to her friend while we were on approach for landing... We were likely between 5000ft to 10,000ft although I have no real accurate number.

So, who else wants to fly Aerolineas Argentina with me? I looked into compensation and my insurance with TID only says delays over 6 hours are compensated and I have no idea about Aerolineas Policies or South America. Any help would be appreciated.

PS. I'm aware I will never choose an exit row seat due to the likelihood of having kids next to you. I will also never fly Aerolineas internationally again.

I don't hate children either, I understand they must have been very tired but it is hard when there are so many screaming and they aren't yours. Maybe they should allocate an area of the plane for those with children. Some of the kids seemed very spoilt and the mess some left in the bathrooms was disgusting. The fact that some parents didn't feel the need to clean it up and leave it for someone else to have to see is pretty bad.
Last edited: May 6, 2014