The memories are still vivid, the dance music is still pulsating through my head, and my body bounces in-sync to the beats. The fun that we had, the smiles that I shared with my friends, and the high-fivers that I hit with hundreds more, was pure exhilaration.

It took me almost 12 months contemplating whether to write that experience into words; it’s hard, realising that what I experienced - the parties, the clubs, the people, the whole vibe - in those two weeks of my life will be difficult to bring out in words. I then reflected some more, reviewed some old photos, turned up the volume of my sound system and then decided I’d type away and give it a crack.

Life is too short to hold back, it’s definitely very true when one is in Ibiza, and this report will remind me of the time that I had. It is still a work in progress, so here goes. Uno, dos, tres and the music takes off……

Good drugs too then, by the sound of it?

opusman said:
Good drugs too then, by the sound of it?
Click to expand...

Smashingly fun, smashingly trashy, and smashingly living up to the expectation of Ibiza, the party capital on planet Earth. There is absolutely no other destination like this and what a smashing time did Ibiza gift to us. “All the crazy sh** that I did tonight, those would be the best memories, I just wanna let it go for the night, that would be the best therapy for me” and if you haven’t heard those lyrics by now, well then Ibiza might not be the place for you! You see, Frenchman David Guetta, one of the better known club DJs right now, made those words famous.

Legendary for its party and club scene – this is Ibiza. The season opens in June and ends in late September, twelve or so weeks of too much summer fun. The world’s best DJ’s fly in on their private jets, spin their tunes, and then fly out again to spin more tunes in other parts of Europe and all over the world. They do indeed make ‘the world, one big dance floor’. At 50,000 euros per hour, David Guetta doesn’t come cheap but the two hours each week he spends spinning his tunes at his self-titled “cough* Me I’m Famous” party, it literally blows the Pacha club’s roof off – I have seen it happen!

With the roofs blown off the clubs, Electronic Dance Music or EDM has been taking off globally. Some of my favourites at the moment include Hardwell, Laidback Luke, Like Mike & Dimitry Vegas, Martin Garrix, W&W, and Australia’s own yet super sexy Nervo twins. Worthy mention also goes out to the DJ veterans who have been around for like forever – Paul Van Dyk, Tiesto, and Carl Cox but when you still earn in excess of 10 million euros per year, jet-setting around the world, visiting the coolest destinations and playing at the world’s biggest clubs, I’d be sticking around forever too.

Ibiza is tiny in size but jam packed full of entertainment - think the size of Singapore but 100 times the fun. The blissful summer days are spent chill-axing – a mix between chilling and relaxing - by the pool or the beach or anywhere near water, tanning one’s body, drinking sangria and eating tapas whilst 120 beats per minute music is being played in the background. Many party-goers are recovering from the night before however for me, I have just arrived onto party island – ready, willing and enthusiastic for the big events yet to come. Tonight will be huge, first up starring super-club Amnesia. VIP tickets bought. VIP area reserved.

Thursday nights are pure hotness – the mega-clubs and the mega-DJs are all starring, the ‘to be seen’ crowd are out. Then there’s just us, a handful of aussies who have just flown from in from various parts of the world – just to experience a smashingly great time. We who love EDM live by the rule of “Eat, Sleep, Rave, Repeat”. If there’s only one night to party on Earth’s biggest party island, Thursday night it is.

Glad you had a blast. Don't think I would fit in very well there. It seems the partying is well past my bed time :mrgreen:

Thanks for the heads up, dude; wow, that's so hip; cool; hot; sick (baby)! In summary - self important wankers making noise, right? Major place to avoid. But if that's what one wants, it would be much cheaper to get that sort of experience in Moonee Ponds. But stay cool, hot, hip (whatever) ... dude. See, I'd fit right in.

Sounds like a great time was had, I think I went the wrong way to Ibiza with a Thomson package many years ago ex UK lol

Fortunately I've yet to see myself on any of those Holiday Reps type shows!

2:00am Friday morning; we have just arrived at Amnesia – and it’s perfect timing. The truth is, it’s entirely sensible to be arriving at this time given most parties don’t end till way after sunrise anyway. Tonight’s party – this morning’s party – is called Cream and it features German superstar Paul Van Dyk, Scotland’s highest paid performer Calvin Harris, super-hero Dutchman Laidback Luke and a few other acts such a cool trance DJ Gareth Emery. Choosing Amensia was a hard decision, as any of the other super-clubs on the island – such as Pacha, Privilege, Space, Ushuaia – all had big named DJs lined up too …. think David Guetta, Avicii, Nicky Romero, W&W, Carl Cox, Armin Van Buuren, Dash Berlin and the list goes on.

The red Amnesia bus, we have arrived (at the right place):- 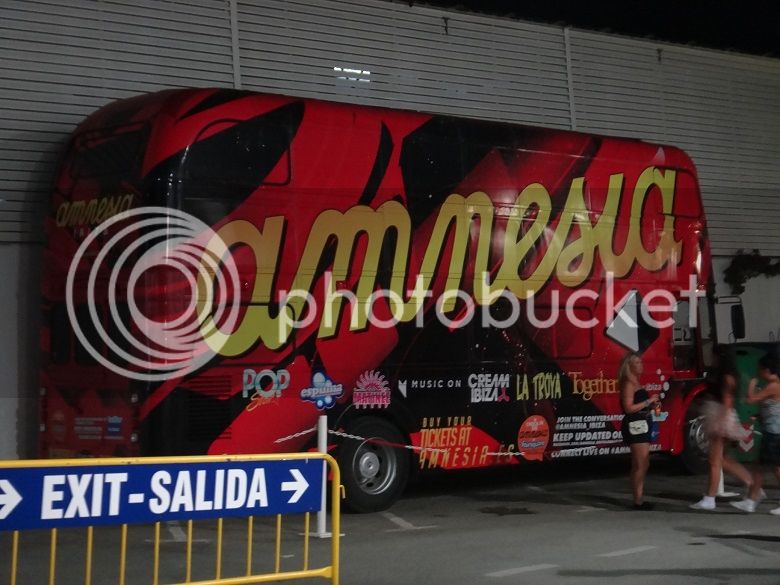 2:00am is perfect timing but those long queues to get in … totally uncool – especially for us VIPs for the night. Let’s skip the queue? tick, An exclusive entrance? tick, Our names on the guest list? tick, and no waiting to get inside? tick. This is what 2,000 euros buys you in Ibiza. It’s straight up to the VIP terrace level; a roped off private area – relaxing sofas, private host, table service, and on-call masseur too - overlooking the DJ booth, the sexy club dancers, the main dance floor and 5,000 party-goers below. Amnesia claims to have the best sound system in any club anywhere in this world – the vibrations from the bass claims to gently massage the insides of your body. 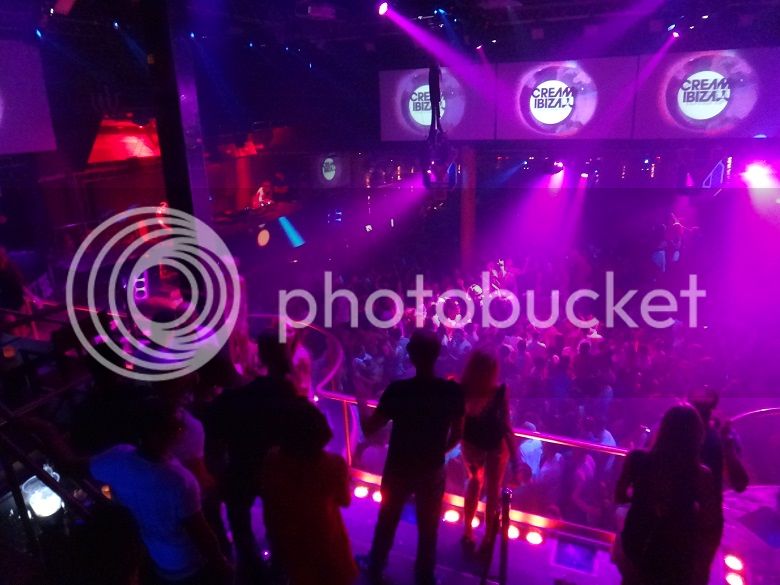 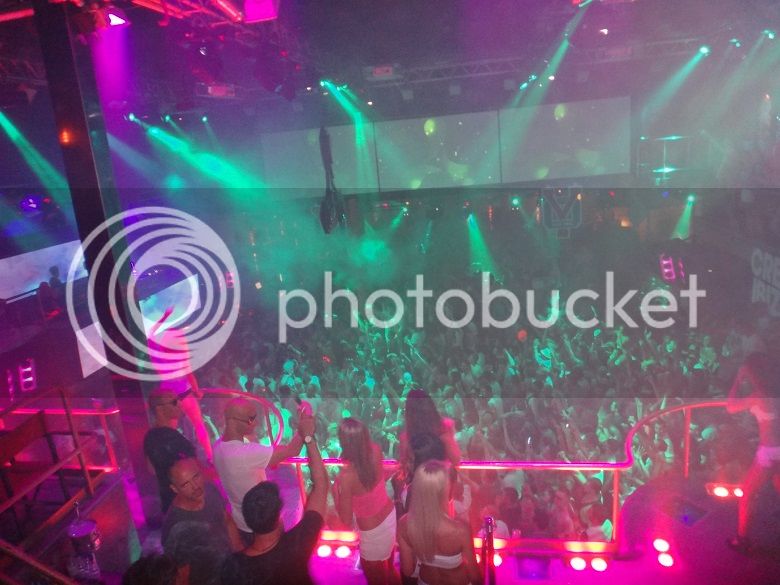 VIP means VIP everything including Very Inflated Pricing. Grey Goose Vodka, Hendrick’s Gin, Bicardi Rum – that’s 400 euros per bottle thanks but life is good in the fast lane and we are not slowing down, definitely not tonight anyway. 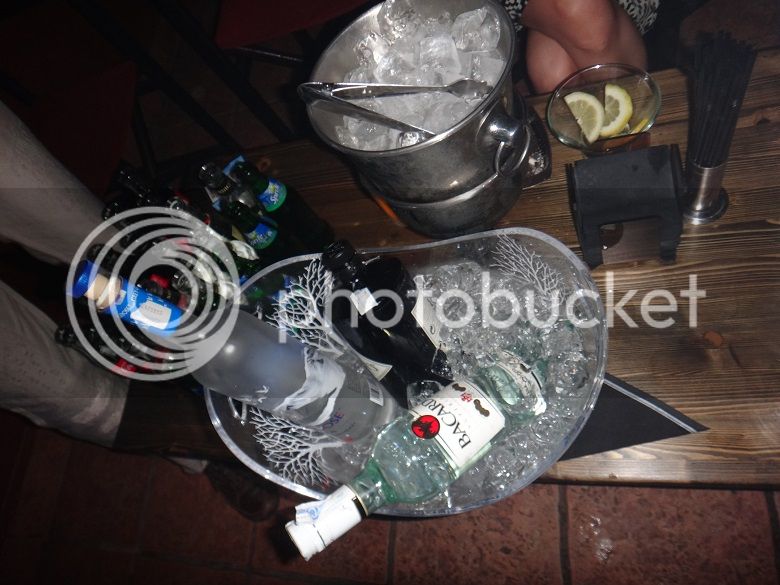 Did I read correctly that it was 2000 euros for VIP entrance (and do you pay for drinks on top of this?) Was that per person or for two of you?
Must have been some party then!

Germany’s Paul Van Dyk or PVD is a superstar in his own right. A seasoned DJ focusing on trance and electro house and even winning a Grammy Award! PVD is said to be a serious frequent flyer. Apparently he claims to have the second highest number of points amongst all the Lufthansa Miles and More members. I guess it’s pretty easy to rack up those miles being one of the best DJs in the world performing over 120 events all around the world. 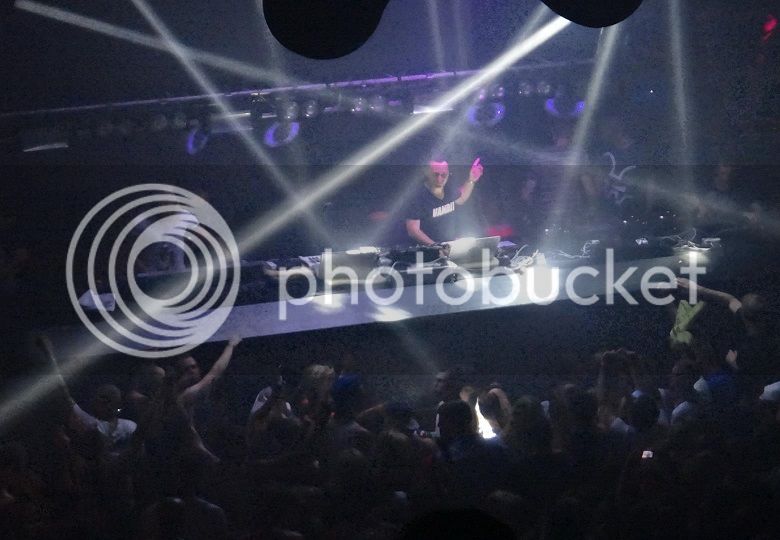 In the room adjacent to main stage, Scotsman Calvin Harris who earns close to a million dollars per week is a very lucky man. He's playing some pop versions of his many number 1 songs; such as Bounce, Feel So Close, We Found Love, and Sweet Nothing. The girls love him (and some of the guys who swing that way) but I find his music a bit boring – it’s good for the radio but a bit too boring boo-hoo in a club. I am sure he doesn’t mind my humble opinion either – after all, he’s just bought a US$7M mansion in the Hollywood Hills just because he can, so my two cents worth isn’t really worth anything at this time.

love_the_life said:
Did I read correctly that it was 2000 euros for VIP entrance (and do you pay for drinks on top of this?) Was that per person or for two of you? Must have been some party then!
Click to expand...

Dutchman Laidback Luke is a star in my books. Contrary to his name, he works ten times as hard and wants to really take the crowd to the next level. He performs at 200 events per year – so he really is a serious jet-setter!! His music style includes many unexpected drops and big room surprises that take the crowd to another planet. Out of nowhere the club’s mega-ice jets flare up and discharge a cold whoosh of icy mist and foam shoot onto the dancers below - making it refreshingly awesome.

The other party room and Laidback Luke:- 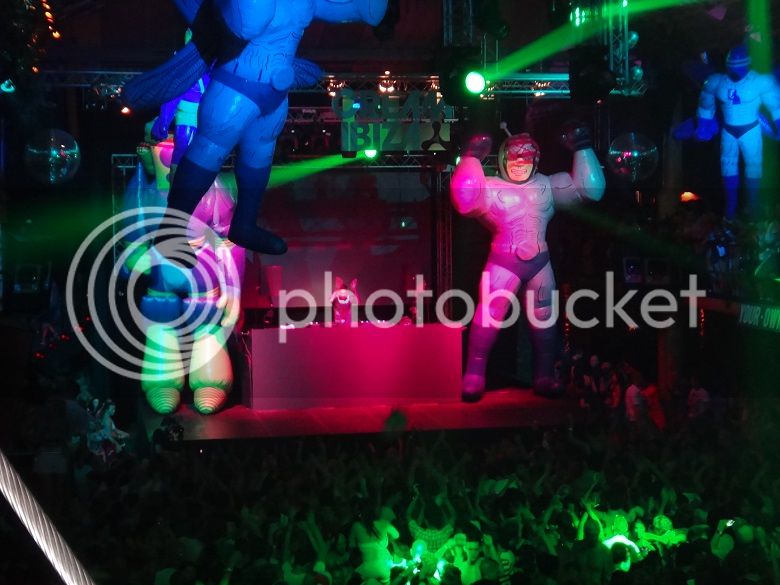 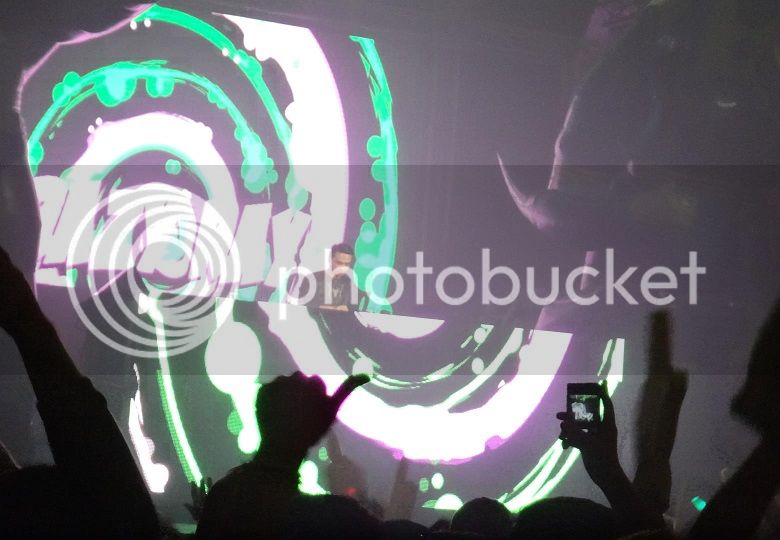 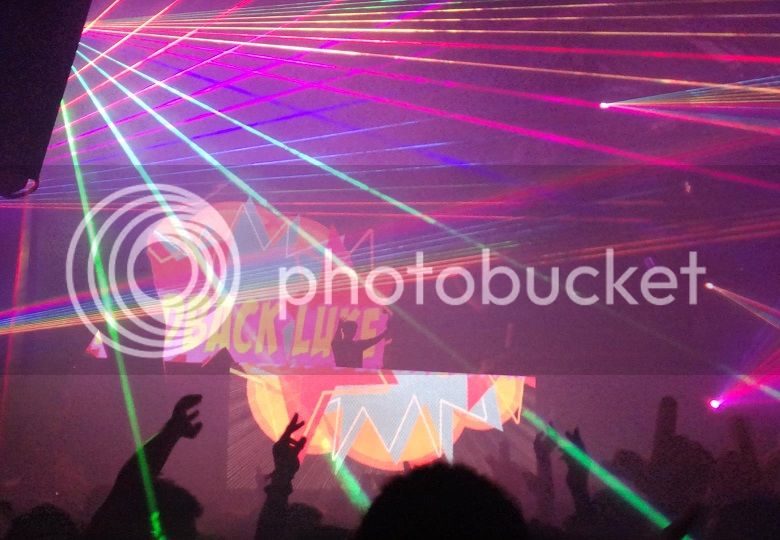 A short video of the party from our VIP area, playing one of my favourite dance tracks - Ben Gold “Fall With Me” – taking us all to another level:-


My very first party in Ibiza under my belt, this was a smashingly crazy event. No doubt the whole VIP package helped. The club took me to level higher than any of my pre-arrival expectation, smashingly recommended if you are into Ibiza and parties! 7:30am is way too early to stop – kicked out of the club – with a few thousand others – and into the Ibiza morning. I will not forget that moment – very happy feelings.

Good times Alanslegal, Ibiza is definitely on my list of places to visit before I get too old to enjoy this stuff
The video you took reminds me of a famous nightclub in Kiev I went to not long ago when it was still a vibrant city, although I'm sure not as fun atmosphere as Ibiza

I look forward to your futuremusic festival write up. Sounds and looks like good times . Any shots of the sunrise recovery or day parties on the beach?

All I have to say is: https://www.youtube.com/watch?v=fmBPEXMJ7A0
B

I went to Ibiza two years ago – had an absolute ball. Went to Amnesia (twice) for La Troya (Closing Party) and Matinee, Space (twice) for Kehakuma and We Love Space (Closing), and Pacha for Defected (Closing). We had intended to go to Ushuaia for Luciano & Friends but didn’t realise it was a day-time thing so rocked up at 11pm only to be told it was almost closing! Amnesia was by far my favourite venue – Pacha was too heavily geared towards VIPs and the staff/club didn’t seem to care about anyone else.

We literally partied all day and then slept all night (on Day 2 I woke up at 5pm).

It’s the sort of thing I only needed to do once though.
Dan Murphy's: Buy Wine, Champagne, Beer & Spirits Online
Now with contactless delivery, shop online to get drinks delivered to your door or pick up in-store in 30 minutes. Lowest Liquor Price Guarantee. Biggest Range.