Long tile lurker and infrequent poster but leaving in over seven hours on the first leg of my trip. First dilemma has arrived. About 18 hours beforehand, the dreaded phone call from Qantas informing me of an aircraft change from a Business seat on a B717 to Economy on B717-200. I could have changed to a later flight but weighing up between that in domestic business and less time in the Sydney First Lounge or go cattle class for the short hop from OOL and have optimal time with panoramic views of the runway and sipping champagne, well I hope I have put my trip back on focus of a good time. At least, I still have the right rockstar seat on QF27(fingers crossed)! Hope to continue this as a Trip Report.

FYI. Just managed to interline my baggage from Santiago to Lima. At first, the sub-contracted staff said it couldn’t be done but I had the printout from the Qantas website so he contacted his manager who admitted that it could be done but that they would prefer not letting it be known. She said she thought she had only done it once before. So, be polite, show them the evidence and, as an aside, tell them how you heard upper management doesn’t even actively inform their staff so as not to make them look like dummies.

Which airline did you interline to?
F

JohnM said:
Which airline did you interline to?
Click to expand...

Latam, so still Oneworld but my two tickets are not one paid and one award. My flight to Santiago is award, my return was paid(one ticket/PNR and my Latam was award so thought they might consider both as awards.
F

In the First Lounge now. Took an hour for transfer Domestic to International but Immigration was quick. The lounge was a bit busy but still lots of seats and seems to have thinned out a bit. Had cappuccino, eggs Benedict with ham and having Pierre Jouet champagne while runway watching. 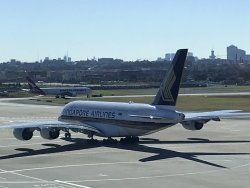 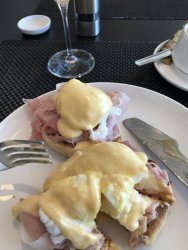 In Salon VIP Latam lounge in Santiago. Quite basic with cold snack being the most predominant. By the way, the dumplings starter on QF27 were delicious especially the spicy sauce, which was very much like that accompanying the Japanese version, gyoza.
W

you were lucky with checking through your bags. Latham won’t do it in separate tickets even from Latam to Latam. I flew Syd-SCL-Aep last year and no amount of convincing would get the agent to check through my bags from my award trip (to SCL) and on to AEP (paid). As a result had to clear immigration in SCL and pay the us$200 fee for an on arrival visa. Not happy.

Mini LED Projector | Little Gadgets
Transform your lounge room (or any indoor space) into your own private movie theatre in just a few seconds.

Our Mini Pocket Projector is small, light and easily transportable. A must have!

Out of curiosity, at what point / how did you get your boarding pass for the Santiago - Lima flight? In Sydney? Airside in Santiago?
F

juddles said:
Let us know when you arrive at destination if bags made it too
Click to expand...

They arrived safe and sound. Sorry for the late reply.
F

juddles said:
Out of curiosity, at what point / how did you get your boarding pass for the Santiago - Lima flight? In Sydney? Airside in Santiago?
Click to expand...

I actually got it at Coolangatta at first check-in. They even gave me my Lima-Cusco flight for two days later.
J

Had no trouble on my recent trip...bags from CNS -BNE-SYD-SCL-LIM.
All BP in CNS.
On way back she checked me and bags from GIG-SCL-SYD-CNS...despite their being an overnight in SCL and SYD.
Too efficient!
All QF and LATAM.

jastel said:
Had no trouble on my recent trip...bags from CNS -BNE-SYD-SCL-LIM.
All BP in CNS.
On way back she checked me and bags from GIG-SCL-SYD-CNS...despite their being an overnight in SCL and SYD.
Too efficient!
All QF and LATAM.
Click to expand...

That is amazing. Maybe finally things have improved

I flew SYD-AKL-SCL-BOG a few weeks ago, with SYD-AKL on QF metal. QF F check in said it was simply impossible for them to issue LA boarding passes due to IT system differences. That necessitated waiting for about 5 minutes at the AKL transfer desk - it didn’t seem like a simple process, it took her quite a few minutes of typing to get it to print.
W

jastel said:
Had no trouble on my recent trip...bags from CNS -BNE-SYD-SCL-LIM.
Click to expand...

Was that all on one ticket? The problem seems to arise with separate tickets.
J

Yes one QF Booking...same number for return.
Done by travel agent if that matters?
Some of the internal LATAM flights were included in the tour and service was down a level then...taking 10-15 minutes to check in each person etc.
J

juddles said:
That is amazing. Maybe finally things have improved
Click to expand...

Maybe I just got lucky...
Thanks for all your tips as well.
W

If it’s the same ticket they have as it’s an IATA rule. Same would be even if you connected from virgin to Qantas to United in the same intinerary.

wandersen said:
If it’s the same ticket they have as it’s an IATA rule. Same would be even if you connected from virgin to Qantas to United in the same intinerary.
Click to expand...

I think the issue, at least from my experience, isn’t whether they’ll connect your bags (they will as you’ve described), it’s the inability of QF to issue LA boarding passes - even on their codeshare QF321 (SYD-AKL-SCL). But sounds like CNS is the exception, because numerous reports on here by BNE and SYD staff saying they can’t. I had first hand experience of this just a few weeks ago.