We have managed to score flights to Frankfurt for late Aug 2022 with a return from Milan about 5 weeks later. We have spent a fair bit of time in Southern Germany & Italy previously but this time we may venture north first. We are keen walkers but fine dining and museums are not high priorities. Any suggestions of places you have visited & enjoyed?

I love Hamburg and Berlin. But Kassel, Göttingen, Aachen and Trier are also great medium-sized towns. If you visit Trier, it's also just a quick day trip over to Luxembourg which is worth a visit IMHO.

I wouldn't bother with Bielefeld (some say it doesn't even exist, anyway) and the only thing I found worth seeing in Köln is the huge cathedral outside the main train station - which you can spend an hour looking at when changing trains en-route to somewhere else

+1 for Berlin if you’ve never been.

I also did a tiny bit of exploring of the wineries around the western border of Germany..
A public bus starts from here, Neustadt (Weinstr) Hbf · 67435 Neustadt, Germany and visits winery town after winery town
The town is actually called "Newtown on the wine road"
though the town is technically South of Frankfurt

I am still catching up on the site after a couple of days off line so a little late to respond.

In the far north, on the Baltic, we had a nice 3 day stay in Wismar. We had a car so visited Stralsund & Lubeck from Wismar. Lubeck itself would happily occupy a few days of your time. Bremen is another place worth a couple of days.

My recommendation for a bit closer is what is called Münsterland it comprises the flat area around the town of Münster. It is famous for rivers, walks bike rides and and a number of Wasserschloss - moated castles and palaces. The express train trip from Frankfurt is about 3 hours. We were going to spend 4 or 5 days there in 2020 before the current unpleasantness forced a cancellation.

I have attached a couple of thumbnails of the two Wasserschloss we saw on a previous fleeting trip. 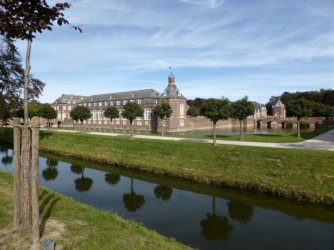 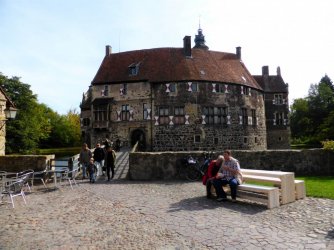 RB said:
We have managed to score flights to Frankfurt for late Aug 2022 with a return from Milan about 5 weeks later. We have spent a fair bit of time in Southern Germany & Italy previously but this time we may venture north first. We are keen walkers but fine dining and museums are not high priorities. Any suggestions of places you have visited & enjoyed?
Click to expand...

Half my family are from NW Germany (Near Wesel), and I've spent a fair bit of time around Germany. The northern part of Germany is flat, great for cycling but as far as walking goes it is nowhere near as dramatic as the south.

One of the more scenic areas near Frankfurt is Rudesheim, the Rhine cruise ads you see take quite a bit of footage from this area up to Koblenz. Plenty of hikes and walks, plus a big winemaking area (one of the german wine regions).

The cities further north on the Rhine (Bonn, Koln, Dusseldorf, Duisburg) do not have striking scenery that cities in the South have. They are more industrialised and modern (akin to Milan/Turin as opposed to Rome/Naples). The more scenic northern areas are closer to the North Sea (Bremen, Hamburg), and further east to Dresden.