The approach speeds are just so impressive for an aircraft of that size. What an incredible wing. Landing slower than 737s often do.

There are other speeds
GD
S
F
Vref

VRef = VLS
What is the difference?

Are all these speeds basically a method of managing energy within the performance constraints of the aircraft?

jb747 said:
This is the FMC at about 1,000' during an approach (my last one to London). You can see most of the data we've been discussing.

In that image, it says trans FL065. Does that mean transition altitude is set to 6,500ft?

flyer89 said:
The approach speeds are just so impressive for an aircraft of that size. What an incredible wing. Landing slower than 737s often do.
Click to expand...

And that wing meant that we could depart from 24L in LA, whist the 747s and 777s had to go over to 25. Often saved us quite a bit of time. It was a very good wing, which was designed for a future model over 600 tonnes. But, as that model never happened, it really became part of the over engineering of the aircraft.

Quickstatus said:
There are other speeds
GD
S
F
Vref

VRef = VLS
What is the difference?

Are all these speeds basically a method of managing energy within the performance constraints of the aircraft?
Click to expand...

Vapp = Vls LDG CONF+ ( 5 ≤ headwind/3 ≤ 15 )
Vls is the lowest selectable speed for the autothrust. It's the speed the aircraft does not want you going any slower than. Autothrust was engaged for 99.9% of all landings.

The aircraft is told which landing configuration we're going to use with the CONF3 / FULL tick box. The wind that is used for the calculation is the one that we enter top left.

Green dot is best lift drag ratio. It was used as the minimum speed. It adjusts with with configuration changes.
In the approach phase, if you want to slow below GD, you'll need to select flaps. F1 to go slower than clean GD, then F2 at S speed, and F3 (or full) at F speed. They're a little different in the takeoff phase. F1 is selected at F and clean at S, but you need to keep the acceleration happening.

Quickstatus said:
In that image, it says trans FL065. Does that mean transition altitude is set to 6,500ft?
Click to expand...

Yes. London's TA was 'by ATC'. We'd change the setting as soon as ATC cleared us to an altitude, not a flight level on descent. And of course the reverse on a climb. In this case the FMC wants to know the TA so that it can allow for any vertical deviation caused by the change of pressure scale. There's 9mb between the two settings, so roughly 260'.

The vertical deviation shows that we're almost 2,000' above it's ideal approach path, but that was quite normal, as the system wasn't capable of handling the variations caused by ATC. Nor did it allow for early configuration changes for low speed requirements. The actual height was 5,500, at 16.2 nm to run, and 180 knots. That's near enough to a perfect position.

This was the rest of the displays cropped from the same image. 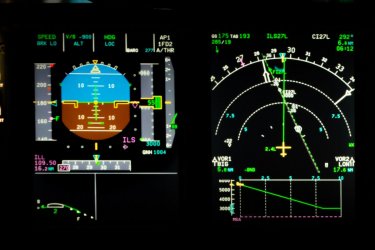 Here's an image from the approach into Singapore a couple of days earlier.

It's not showing on the forum at the resolution I uploaded it at. Any thoughts on how to fix that. 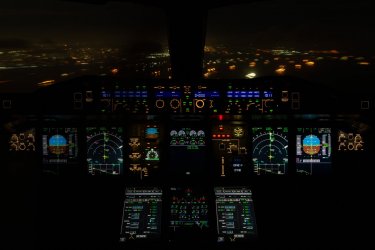 Worth printing and framing?
S

Which coughpit at a night Lit up is more appealing? A380 or Boeing?

Is Airbus quieter vs the Boeing on approach? AV I find the 738 very loud vs say the A320. Like a Commodore vs an Audi.

Saab34 said:
Which coughpit at a night Lit up is more appealing? A380 or Boeing?

Is Airbus quieter vs the Boeing on approach? AV I find the 738 very loud vs say the A320. Like a Commodore vs an Audi.
Click to expand...

I far preferred the 380 to the 747, though, to be fair, it’s a much later design. The coughpit was quiet enough to hear aircraft passing overhead with 1,000’ separation.

jb747 said:
I far preferred the 380 to the 747, though, to be fair, it’s a much later design. The coughpit was quiet enough to hear aircraft passing overhead with 1,000’ separation.
Click to expand...

How noisy or quiet was the 747 coughpit?

harvyk said:
How noisy or quiet was the 747 coughpit?
Click to expand...

Noisy enough that the headsets had to be sound cancelling.

Saab34 said:
Which coughpit at a night Lit up is more appealing? A380 or Boeing?

Is Airbus quieter vs the Boeing on approach? AV I find the 738 very loud vs say the A320. Like a Commodore vs an Audi.
Click to expand...

I’d have to say the Airbus at night is more appealing.

The 737 is extremely loud. How guys don’t have noise cancelling headsets is beyond me. You can always tell after a crew change whose hearing is going by the volume settings on the comm selector panel.

The 777 in comparison was definitely quieter and once we were no longer on VHF with ATC, we would go headsets off and turn on the speakers. Good luck trying to do that in a 737.

The two photos is the difference between the 737 and 777 flight decks. 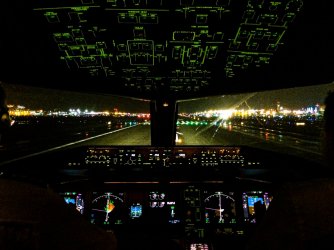 As far as I know, QF never put noise cancelling headsets into the 767; only the 747. The 380 didn’t have them either. And whilst it was relatively quiet, it wasn’t totally so. I used to find that some of the younger pilots were keen on going over to speakers and headsets off, but the older blokes were generally headsets on and use the intercom. For much of the time too, you‘d have the headset over one ear, and I wonder if there’s a correlation between our hearing issues and the side we sat on. For me, my right ear is worse than the left, and that’s the one that would have been uncovered the most. You have to wonder just what residual workplace safety issues are lying in wait for the airlines as we age.

Quickstatus said:
Worth printing and framing?
Click to expand...

I’ve got other things that I frame these days. And whilst that image is more than clear enough to be printed (you can clearly read all of the displays in the original), I probably don’t need it on the wall. I guess I could put it in the wardrobe, with a chair, and just sit there all night.

It was always very difficult to find spots that rigid enough to mount the camera. For this central shot, the camera was most likely mounted on the centre seat frame, and it was subject to harmonic vibrations. Only about 5-10% of shots manage to happen in a vibration null. And once the gear goes down (it’s in transit in the image), the vibration was constant, so the shots all become soft.

The only rigid spots that I found were the overhead grab rail, and the window glass itself.

For those of you who like trying to read the displays. This is a group of shots, taken over a short period, showing the start of an ILS. There's quite a few mode changes, and various 'captures' shown. 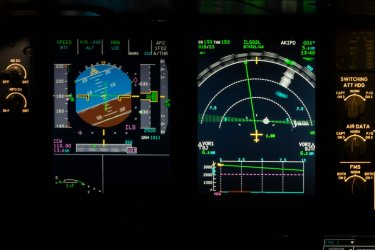 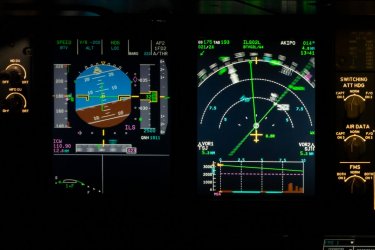 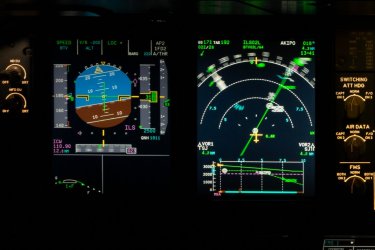 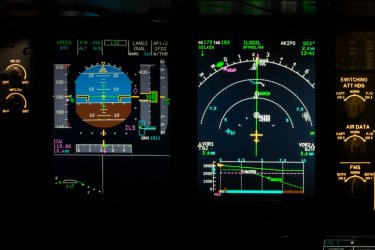 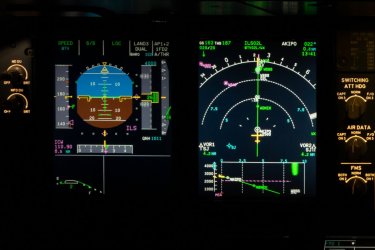 What is the little display in the section under the artificial horizon?

Re horizons-
Does the sensation of spatial disorientation ever dissipate?

Quickstatus said:
What is the little display in the section under the artificial horizon?
Click to expand...

It's showing the flap position. The right hand side can hold messages, though I don't remember any of them being terribly important.

Quickstatus said:
Re horizons-
Does the sensation of spatial disorientation ever dissipate?
Click to expand...

Yes. I guess that at some point you've spent so much time looking at those displays, and ignoring your inner ear, that it becomes your native state. I'd expect that the point is measured in thousands of hours though.
Last edited: Oct 27, 2021

Each dot is a flap position?

The front of the wing seems odd or at least different to other aircraft wings.

Quickstatus said:
Each dot is a flap position?
Click to expand...

Yes. We had four selectable positions, but the system automatically moved the flaps at certain speeds. For instance when we'd select flap 1 on approach, it would initially only give us the initial leading edge position, but would then give the first stage of trailing edge once we slowed below 222 knots. That was called 1+F. (On acceleration after take off, it initiated auto retraction at 212 knots).

Flap 2 would leave the leading edge at the first stage, but give a second stage of trailing edge.

Flap 3 was the second stage at the leading edge, and third at the trailing. And flap full is everything.


Quickstatus said:
The front of the wing seems odd or at least different to other aircraft wings.

There does not seem to be a gap between the slats and the wing - unlike say the A320
Click to expand...

The entire purpose of a slat is to create that slot (or gap). Air flows through there, and tends to regenerate the upper boundary layer. A slat will allow an aircraft to achieve a greater angle of attack before stalling (and so more lift), but it does not increase lift itself. A flap increases the camber of the wing, which does increase the lift, but it actually reduces the stalling AoA.

The leading edge of the 380 has panels inboard of the inner engines, between the engines, and the outboard of the outer engines. The middle and outer panels are standard slats, but the inners are what Airbus calls 'droop nose' slats...but they're really leading edge flaps.

Something that nobody notices is that the ailerons also act as flaps, drooping symmetrically by 5º at 1+F.

Interesting audio between Toronto tower and an EK 380.
Obviously the pilot slightly misread the charts but seemingly EK didn't have the latest information about A380 capable gates.

Did you ever have a similar situation with charts?
Or call your aircraft "big bird"

moa999 said:
Interesting audio between Toronto tower and an EK 380.
Click to expand...

They both remained polite, which wouldn't have happened a little further south.

The EK guy was doing the right thing. Someone's assurance simply isn't of any value if you have a chart showing something as banned from your use. The Jeppesen charts mostly hash out, in red, the places we couldn't go. It was both clear, and definite.


moa999 said:
Obviously the pilot slightly misread the charts but seemingly EK didn't have the latest information about A380 capable gates.

Did you ever have a similar situation with charts?
Click to expand...

The charts are electronic, and updated very regularly. The updates are checked before each flight. An error on the chart, that didn't have a NOTAM correcting it, would be quite unusual.

I have seen chart errors though. In the two cases I can think of, they were both airborne features, and I was extremely surprised that nobody had picked them before me. One was a height error on a Nadi approach chart (back in the days of paper). The other was in the go around for an approach at LA. It actually would have been dangerous if you'd followed it, as it would put you into the GA track of one of the other runways. I reported it in the morning after arriving on from Melbourne, and it was fixed in the e-charts the next day. It may not have come up, simply because LA gave radar headings for a GA, but it was still extremely surprising that it hadn't been pinged.