Frequency allocation is contentious and handled differently from country to country, with it being influenced by political factors as well as commercial ones. The FCC sold the spectrum at a huge fee to the telcos - they would have been motivated to sell as much as possible to maximize profit for the US Treasury, as it's one of the few ways the US government can raise money that's not a tax. I'd say the FCC thought they were leaving enough gap for the RA spectrum, the primary point of contention here, at the time they conducted the auction. It seems other countries' equivalent bodies were more conservative in leaving this space unused.

5G radio communications has been engineered to maximise the RF spectrum efficiency. In the C-Band spectrum, 5G uses 15KHz inter-carrier spacing (or multiples of). Carrier stability and narrow bandwidth per carrier means the 5G radios will have extremely little "spill" beyond their defined spectrum and any inter-modulation between carrier channels will be be contained very close to the boundary of the spectrum range. I have not run the numbers, but expect even 7th, 9th order and beyond modulation cannot get anywhere near the 4.2GHz boundary for radio altimeters operations.

So it seems to me any vulnerability for interference at the RA receiver is more likely due to poor design of the RA technology (receiver input filters and modulation techniques) than it is due to emergence of 5G in an adjacent frequency spectrum.

Hopefully some thorough testing will reveal if any real vulnerability do exist, and if none can be determined or theorised, life and aircraft operations will return to normal. My main concern is just how long it will take the FAA to undertake the required investigations and draw evidence-based conclusions.

N860CR said:
Maybe JB or somebody can correct me… but I’d have assumed a radio altimeter wouldn’t be a required dispatch item provided an auto land or the like isn’t needed?
Click to expand...

I’m not sure if I have the 380 MEL any more. I’ll have a look tomorrow, when I get home. I can see that having one (of the three) out, would be acceptable, but might give some limitations. But, this would be taking all of them out…so that would almost certainly be a no go.

Dubai, UAE, 20 January 2022 – As a result of telecommunication operators delaying the roll-out of 5G networks around US airports, the US Federal Aviation Administration and Boeing have issued formal notifications that lift the previous restriction on aircraft operations, enabling Emirates to safely restore full scheduled operations to all its US destinations by Saturday.
Click to expand...

Scarlett said:
I love it: “I have weak RF knowledge…” and then proceed to spew a bunch of stuff that sounds like it’s come straight from Stimo’s!

You can all find a copy here if you really need to derive the radar range equation from first principles:

Now the ELINT chappies know heaps, and Synthetic Aperture Radar was a big thing. An AWAC plane has lots of goodies in it, and costly ceramic and gold plated horn thingies. Presently FAA is not naming the weak RA's, but does like to say they met the then standard > 10 years ago. But several 10's of billions of dollars made whitecoat reports - well - ignorable. Seems EU made planes don't have the problem. I do not know if super heavy rain - would weaken C band RA's. Certainty there is an opportunity to get fancy, and see if windshear can be better predicted.

Exponential mobile phone use - everyone has one - means all the spectrum space was filled up, and the radio frequencies had to go up up and up, spectrum prices went up up and up. Then data usage and speed went crazy, and that cough frequency became valuable, even if they have to install a base station every 800m or so.

Someone asked about 5G C Band. Basically it is line of sight only - requires more towers, more expensive, often blocked by concrete towers and double glazing - so not wanted by telcos in the 2G era. Also the radio chip at 4Ghz was hard to make small enough to fit into mobile phones, so nobody wanted 'dropout' spectrum. The best 400mhz bands were used, then the 1000's, 2000's, now the 3000's. I believe above 3.8Ghz, even using teflon, the electronics are prone to heating and poor efficiency.

Simple analog or discrete logic RA's using a likely cough frequency made the RA spectrum a safe bet decades ago. But if silcon on carbon or graphene gets mass production practical, there may be another spectrum gold rush.

Quite OT.. but if we have run out of usable spectrum in less than a hundred years.. what next ??

tgh said:
Quite OT.. but if we have run out of usable spectrum in less than a hundred years.. what next ??
Click to expand...

Space. The next big thing is already getting congested in the RF spectrum and the local ACMAs, FCCs etc aren’t keeping pace. There are certain countries in our Pacific neighbourhood that will grant spectrum for LEO satellites that Oz wouldn’t. Yet that thing can be whizzing by overhead and operating on all manner of frequencies….

SpaceX alone are launching upwards of 60 Starlink sats every two weeks! They’ve got almost 2000 up and many more to come. 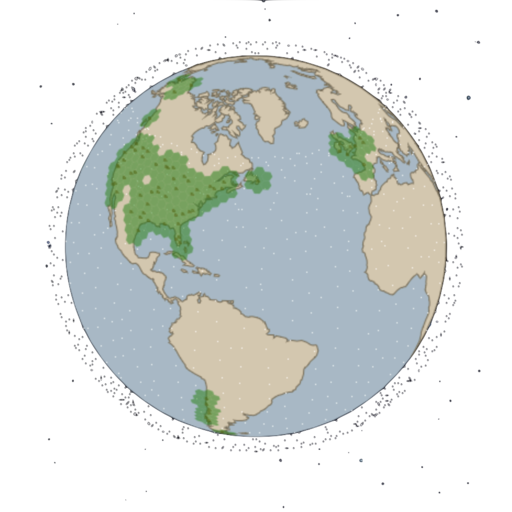